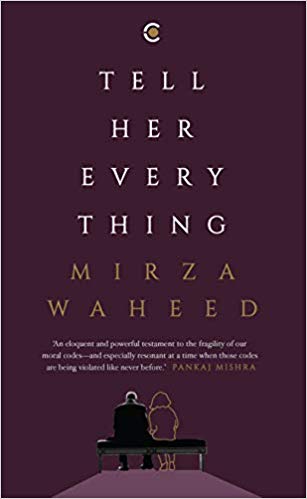 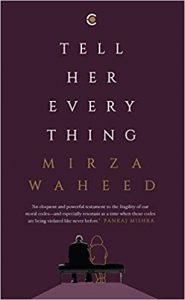 ‘Of all the men in the world, of all the doctors in the world, of all the fathers in the whole world. I happened to be the one present in that place at that time.’ This line from Mirza Waheed’s Tell Her Everything immediately brought to mind that iconic dialogue from the iconic movie Casablanca: ‘Of all the gin joints, in all the towns, in all the world, she walks into mine…’ It also brings into immediate recollection, the character of Dr K from Franz Kafka’s The Trial, a recognition that is deliberate. Waheed’s protagonist is Kaiser Shah, a doctor with his name abbreviated to Dr K by colleagues, thereby strengthening the Kafkaesque connection. As the title suggests, the novel is a confession from a father to his daughter.

Dr K was once a successful doctor, who now lives a retired life in London. His daughter Sara has been away from her father for the last two decades, as she has been living and studying in the USA ever since the death of her mother. Naturally, the two are estranged and don’t share much of a bond. Sara fills the pages of her diary/notebook in letters to her father, and hopes to meet him one day in person. And now, Dr K, living with tremendous guilt, decides to ‘tell everything’ to Sara.

The novel is a gradual, meandering, sometimes rambling account by Dr K on the circumstances that led to his ‘retirement’. The pieces fit together gradually, like a jigsaw puzzle coming to life. After growing up and studying in medical school, he gets a job as a doctor in the Middle East. He works hard and earns for his family comprising his wife and his young daughter and very few friends, barring his friend-turned-foe Biju. The circumstances of his upbringing also mean that Kaiser has been a spendthrift, unlike Biju. And ultimately, there is tension between the two.

Gradually, Dr K is pulled into the governmental system in the country he works in, and contrary to the oath he has taken as a surgeon, he aids the disfigurement of convicted criminals according to the punishments meted out to them by law, most commonly by amputating them. Dr K attempts to justify his deeds by saying that it was already being done even before he joined in. In fact, if anything, he and his team made the process more ‘humane’, if that is in fact possible. Biju disagrees. He is more affected by their actions, and this is reflected in his behaviour which becomes increasingly erratic. Biju is under no illusions about the job they are doing, and does not try and think otherwise: ‘…this is a cage disguised as a place of comfort, boss, where we tell ourselves we are happy.’

Dr K however tries to justify his behaviour, and it is here that issues of marginalization, subjugation and diaspora come in. From his life as a young Muslim boy in India in the period immediately post-Partition to later becoming an Indian doctor practising in UK, Dr K paints his life as a struggle to adjust and prove himself. He also points out the hypocrisy in the latent discourse of different nationalities and classes, especially in London where he now lives: ‘I have also noticed that we say “barbaric, medieval” when we talk about the system over there, and merely “controversial, contested” when it comes to, let’s say, your country.’

Dr. K wishes to tell his daughter ‘everything’ in an attempt to justify his actions and behaviour, and contextualize it. But he fails. When Sara learns and understands everything, she still calls him an exploiter: ‘You are a good man, a very good man: that’s the reason you became a perfect wreck. You are, certainly were, a great father. A good man, a good father. But not good enough.’

Through the dilemma that Kaiser expresses, Waheed forces the reader to also reflect and ruminate on their own actions, where they may have put their selfish interests above larger ones, and committed wrongs––maybe not legal, but definitely ethical or moral. How many of us can put our hands on our hearts and claim to have never done such a thing?

Tell Her Everything, despite moments of frustration is never short of compelling. There are times where one feels that the author does not complete his train of thought, which could have lifted the narrative further. However, the novel raises moral and ethical questions. It is an engaging read that would appeal to a variety of readers, each for a different reason.