A Caretaker Of Feelings 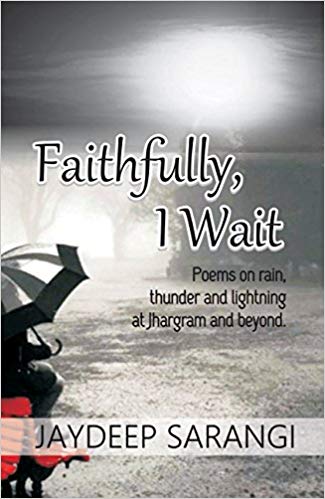 Jaydeep Sarangi has always been a prolific poet; Faithfully I Wait, is his sixth poetry collection. Sarangi lays open his soul in this collection of poems. Reading through the catalogue of his works would enlighten a reader of Sarangi’s oeuvre—a long list of collections, edited anthologies, translations and critiques. Be it poetry as an art form, translation, anthology or critique, this poet is bound to the genre of verse. The collection is sequential, with the wordplay on ‘faithful’ or ‘faithfully’ functioning as a motif, reinforcing Sarangi’s faith in poetry. There is a strong autobiographical thread and a concurrent temporality in this collection; recollections of the past, living memories, visions of the future and commitments of the present are all wrapped up faithfully in verse. The poems explore moments, revelations, premonitions, and form fragments of a holistic thought process that defines the essence of verse.

In the Preface, Sarangi says, ‘Poetry is a holy and beautiful dream. It is a dream for freedom; total freedom. I want to be a small part of this dream.’ The collection unfolds like a journey, a rite of passage through the poet’s world, his beliefs, his value systems and his enduring love of verse. The poet draws the reader into his verse, in a metanarrative of word and image:

(Diary of a Scribbler)

The collection has a subtitle—‘Poems on Rain, Thunder and Lightning at Jhargram and Beyond’. The book opens nostalgically with ‘Love and Longing at Jhargram’, which is a tribute to the poet’s birthplace, the forest enclosed town of Jhargram, replete with temples, palaces and the dreams of the poet’s ancestors:

My days are carefree.

Red soil is my first love.

The sapling I planted, is a full tree

They often sing songs of the forest land

its native links where I lost

my past. My ancestors breathed their last.

The connection with other poets and poetry is highlighted in ‘Free Bards’. The role of the poet as a hero is described in this poem, where the reactionary element of poetry is elaborated:

Who break walls, build up roots

With owners of law

Rulers of the code. Frontiers of

The most crucial and poignant lines in the poem chart the role of the poet as a crusader and healer. The cathartic and therapeutic qualities of poetry are also emphasized:

A place where the light enters.

Simultaneously, the creation of poetry is traced as an evolution through pain and sorrow. The analogy drawn here is the consumption of the halahala poison by Shiva, and the emergence of amrita or the elixir of immortality, after the spewing of poison from Vasuki, during the mythical churning of the ocean or Samudra Manthan. The allusion of the poet as a creator of immortal words reinforces Sarangi’s commitment to and belief in poetry:

The camaraderie between poets is highlighted in ‘A Caretaker’. The school of Kolkata (Bangla) poets, who share the melancholy of verse, is celebrated against the backdrop of the river. However, the pathetic fallacy of the Teesta flooding blood lends a brooding quality to the poem:

I’m a squatter in a group of poets in Kolkata, Bangla poets.

Of my own. A caretaker of my feelings. Faithful.

‘Mango Tree’ is a reflective poem that explores relationships and nature. A rustic feel is nostalgically evoked here, with reference to motherly love. The tenet of Mother Earth is elicited and motherhood as nature and nurture is illustrated in metaphor. The mother and child making another moon, another universe and the metaphysical conceit of cooking poems in earthen pots is striking:

Under the cool shade of the mango tree:

Remember, we made earth’s other moon.

Between the parallel lives. You taught me
alphabets.

Punctuations. I cooked my poems in your earthen pots.

History is evoked in ‘Beyond the Wall’, with the allusion to the partition of Bengal. The reference here is to the British Raj and the partition of 1905, and the subsequent and final division of the country in 1947. The poet historicizes the political and emotional turmoil with the device of bird imagery:

The song of the cuckoo

By shrill cry of the crows.

The idea of faithfully waiting recurs in the collection as a motif, resonating as a hope, a dream, a vision of something new, something beyond life and death, a vision of poetry. ‘A Passage to Teesta’ echoes this theme with its moving opening lines:

Tomorrow I may be, may not be there,

I keep my words flower as inscription

to welcome tomorrow out of the silence of today.

The river Teesta not only occupies a privileged place in the poet’s life and his poetry, but it also is a way of life, a cyclical elemental spirit that conveys truth by translating silence into words:

Water of Teesta is full truth,

a translator of silence into words.

Sarangi has anchored his poetry on the river and explored it as a metanarrative and a symbol. He has traced the geographic and personal maps with the river running through them. It is no surprise that his latest editorial venture is the e-journal Teesta.The poems are full of life, but there are also reflections on death, as depicted in ‘Prayers’:

Each Varanasi ghat is a life, after life.

Life begins and ends for another one

ghats are slopes to walk down the life

of prayers, inside out.

Sarangi’s command over language is evident here, so is his mastery of technique, which carves tiered layers of meanings that unravel themselves in the verses. The collection is experimental, intensely personal, and rich in its use of imagery and figurative devices. Sarangi cannot be considered a representative poet; he creates a personal niche for himself. ‘Faithfully I Wait’ for his next collection!

Usha Kishore is an Indian born British poet and translator, resident on the Isle of Man. Her  poetry has been published internationally. She has also been anthologized by Macmillan, Hodder Wayland and Oxford University Press (UK) and Harper Collins and Orient BlackSwan (India).  Her poetry is part of  the British Primary and Indian Middle School and Undergraduate syllabi. She won the  UK based Exiled Writers Ink Poetry Competition in 2014 and the Pre-Raphaelite Poetry Prize  in 2013.  She is the author of three poetry collections and one book of translation from the Sanskrit. Her third poetry collection has been recently  published  from Eyewear Publishing, London (2018).