A Crime Thriller For Bharat And India 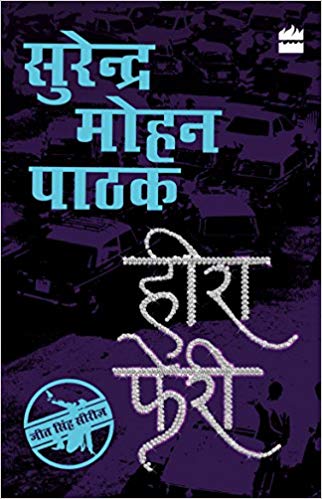 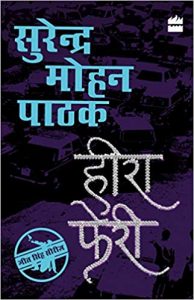 When ‘Hindi Crime King’ Surendra Mohan Pathak took the dais at the third annual Noir Literature Festival at the Oxford Book Store in Delhi’s Connaught Place in January 2017, he faced a rapt audience of fans tightly packed into and spilling out beyond the rows of folding chairs set up at the back of the store. Pathak grinned alongside festival organizer Namita Gokhale as the two unwrapped and posed with the hot-off-the presses release from HarperCollins India, Framed, a translation of Pathak’s Hindi novel Hazaar Haath, originally published in 1998. This release was part of a recent reclamation of Surender Mohan Pathak by a more elite—and in many cases Anglophone, at least in terms of literary reading preferences—urban Indian audience newly smitten with Hindi pulp fiction; Pathak was recruited in 2013 to be the brand ambassador for the new Harper Black (an imprint of Harper Collins dedicated to crime fiction), which began reprinting many of Pathak’s most popular novels in the original Hindi while also commissioning their translations (while not, it should be noted, bothering to credit the translators). The covers were more modern, the paper quality much improved from the grey pulpy pages of the mainstream pulp publishing houses in Old Delhi and Meerut, and the price was bumped from 40 rupees to 125. Sales soared, and there soon followed boxed sets, branded merchandise, and a new lease on life for Hindi pulp fiction.

Now we have Hira Pheri, his 297th novel overall, and the 11th in his Jeet Singh series of books, but the first of Pathak’s novels to be published simultaneously in Hindi and English (as Diamonds For All). In a personal note to readers at the start of the Hindi edition (and absent from the English one), a traditional practice of Hindi pulp novelists who maintain a close connection with their readers, Pathak appeals for his readers’ honest reactions to this dvibhaashi upakram, or bilingual enterprise. He explains that Diamonds For All is not a traditional translation (though the English edition calls itself such), but a new novel he himself wrote in English, a simultaneous version of the Hindi Hira Pheri. He goes on in this note to regale his Hindi readers with a discourse on wills and inheritances, a rumination on the responsibility of the living to plan for their death that eventually turns into something like a standup routine full of outlandish stories and bawdy jokes. It is a gift of Pathak to his Hindi readers, a short essay in his own humorous voice (he is also the author of several joke books), deepening his personal connection with his fans, a connection that is notably absent from the English edition. Nor does Diamonds For All include his email address, or the url of his most popular fansite, as the Hindi one does. These invitations to personal connection and engagement are reserved for his established base of ‘SMP-ians’, and they all read in Hindi.

The plot of both Hira Pheri and Diamonds For All is a dizzying thrill ride over the course of seven days in Mumbai during which the reader chases a cache of 400 diamonds smuggled in from Dubai for Amar Nayak, described on the novel’s first page as ‘Mumbai underworld ka bada don tha, aur mavaali tha, smuggler tha, racketeer tha.’ The multilingual character of Hira Pheri, indeed all of ‘Hindi pulp’ is evident from the outset; the novel also includes a Mumbaiya shabdaavali, or glossary of Bombay-isms. The majority of this multilingual richness is obscured in Diamonds For All, but Pathak does retain some Hindi vocabulary for terms specific to the lexicon of Indian gangsterism (bhaigiri, baap, mawali).

Soon after arriving at the port in Mumbai and being smuggled through customs in a carefully orchestrated manouevre, the diamonds are set loose in the chaos of the city streets and coastal waterways, all of which are carefully named to establish a clear sense of place. This is no small feat for the Delhi-dwelling Pathak, who once explained to me that he’d only been to Mumbai a couple of times, but that it provides a more appropriate setting for a jasoosi novel. One of the footmen, the Goan Jocum Fernando, who charged with delivering the diamonds to Amar Nayak kills his partner, and absconds with them instead. But before he can shoot himself in the shoulder to make it look like he had been attacked by someone else who stole the diamonds from him (ensuring, he thinks, that Nayak will not hunt him down), Fernando is attacked by two other gangsters who, Pathak explains, were floating around without an employer when their own don had been killed and now sought out a major heist to aggrandize their own reputations, recruit followers, and establish their own gang. Fernando escapes by a hair, and finds himself and the diamonds in the backseat of a taxi plied by Jeet Singh, himself a criminal figure in the Mumbai underworld—a master breaker of locks—and the protoganist in nearly a dozen of Pathak’s novels. He is lying low in this novel, hiding out under an assumed name from both an arrest warrant and the vengeance of the gangster whose safe he had cracked. But, when Fernando leaps from his taxi in an effort to evade the upstart gangsters on his tail, Singh unwittingly finds himself in possession of a pile of diamonds. Double and triple crossing follows in this elaborate plot, with everyone in hot pursuit of Singh and the diamonds. As the bodies pile up and the net around Singh tightens, readers are treated to a plot with as many twists and turns as a wild ride in Jeet Singh’s taxi through the streets of the Mumbai.

Pathak was the only Hindi language (or any other Indian language other than English) writer to speak at the Noir Literature Festival at the Oxford Bookshop in Delhi in 2017 (or, I believe, any of the three previous festivals; he spoke at the inaugural festival 2015 as well, when it was called the Crime Writers Festival). After he finished speaking, and more than half the room cleared out (for these dedicated SMP-ians had just come to meet him), no one on stage uttered a word of, or about, Hindi for the next two days. There were panel discussions on gendered violence, historical crime fiction, graphic novels, and more featuring Indian English-language writers and writers invited from Italy, Norway, and Australia. Much of the conversation over those two days revolved around the creation of a noir literature ‘scene’ in India, and writers and publishers looked to their European counterparts for inspiration and advice. But it seemed to me that the vibrant Indian crime literature ‘scene’ had already been very much on display earlier in the festival, when Pathak took the stage and spoke, in Hindi, to his adoring—and numerous—fans. But whenever I asked anyone about it, I got some version of the same pithy response: ‘They write for Bharat, but we write for India.’

With the simultaneous release in Hindi and English of Hira Pheri and Diamonds For All from Harper Black, Surendra Mohan Pathak, it seems, can now write for both.