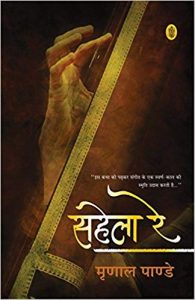 There is a relentless quest to retrieve and recreate the past by dwelling on authentic tales from history and society. The recovery of lost tradition and the emphasis on a need for female tradition in literature has been widely acknowledged. Sahela Re by Mrinal Pande is a novel that traces the tradition of women’s voices in classical Indian music. Mrinal Pande is a bi-lingual writer and was born in Tikamgarh, Madhya Pradesh. Interest in music, art, and literature in its manifold aspects is distinctly visible in her oeuvre. As a journalist she has been associated with leading Hindi magazines like the Saaptahik Hindustaan, Nandan, Kadambini, Vama and several others.

A novelist, short story writer, playwright, translator and a critic, Mrinal Pande is a prominent name in Hindi literature. Sahela Re is her tribute to the world of classical Indian music. The novel brings to life the world of Hirabai and her daughter Anjalina. Hira bai is a beauty from Kumaon. Edward Hewett, an Englishman, falls for her charm and makes her his wife. After his mysterious death in an accident she is compelled to leave her life of leisure and seek shelter in Varanasi. Her daughter Victoria Masih is given a new identity as Anjalina Bai and both become well known singers. Written in the form of an epistolary novel, the story is gradually unfolded through a series of letters that are exchanged between a sensitive academic Vidya, Radha and her brother Sanjeev. Several letters are also exchanged between singers and courtesans who not only mastered the craft of music but were also custodians of culture. Indian classical music had a golden period and is now in a state of impasse. Mrinal Pande looks back at this period with a deep sense of nostalgia and regret.

The beauty of the text lies in its experiment with language at various levels. The local dialect blends with chaste Urdu and colloquial Avadhi with contemporary Hindi. The dialogues capture the subtlety of the bygone era and Pande deftly handles the aesthetic elements of the story which is interspersed with songs of suffering and separation, colours of Holi and celebration. Pande’s love for music and culture lies at the heart of this story. The novel focuses on the plight of women who belong to the marginalized sections of the society. Dancing girls, tawaifs, singers who graced many occasions in the palatial mansions of the rich and noble are women who suffered endlessly at the hands of patriarchy.

The novel examines the excesses of the cramped bourgeoisie with its lack of understanding of the finer things of life. These are men and women whose plight resides in their music as well as their beauty. Pande is keen on drawing our attention to the locale and the inter-personal relationships. Anjalina and her mother are artists who light up the masculine space with their thumris and dadra. Female friendships are established between Ammajani and Hirabai. But their social world is full of uncertainty and time is tenuous. Change is the key word and with the passage of time not only do these artists lose their position, but are also subject to ignominy and despair. The question of survival makes it impossible for them to carry on. The epigraph in bandish Raag Bhoop rings with the promise of eternal bonding between friends and loved ones. A smattering of characters from the five family trees does not necessarily complement the story. However, there are moments of uncanny mirth tinged with pathos as she recapitulates the journey of a tawaif from ‘daalmandi to Hiramandi’ as in ‘youth is four days of moonlight, and if you fail to think of yourself, then old age is miserable for both a wrestler and a prostitute’ (p.94) (my translation).

Mrinal Pande is the daughter of a very popular Hindi writer Shivani. Shivani’s fiction has been loved and appreciated for its beautiful evocation of the rugged beauty of the hills and the people of Kumaon. Pande’s Sahela Re is a vivid account of lives committed to music. Although Pande shares their outer world with us, somewhere she fails to establish the inner movement. The characters remain sketchy, incomplete, in the shadows. Unlike Shivani. This is precisely what Shivani is known for. Her strength lies with her characters. They had a distinct voice and a genuine appeal. A constant flux of letters between the major characters gets tedious and somewhere the text runs out of steam. The motif of the journey becomes a recurring metaphor in the novel. The journey of singers from Kumaon to Allahabad and then to Varanasi and finally to Calcutta is in sharp contrast with the new generation traversing across the globe in search of social and material progress. The past resonates with lost traditions, shattered ruins, erased scandals, amazing friendships, beautiful voices, intimate associations and unfulfilled promises. Sahela Re catches those moments of togetherness, of history, art, music and culture with warmth, opening itself slowly to the horror of crisis and inevitable disintegration in a world full of complexities.

Ranu Uniyal, Professor and Head of English at

Lucknow University, is the author of three books on

literary criticism. Her poetry has appeared in many journals in India and abroad and several anthologies. She has published three poetry collections: Across the Divide (2006), December Poems (2012), The Day We Went Strawberry Picking in Scarborough (2018). Her English poems have been translated into Hindi, Oriya, Malayalam, Urdu and Uzbek languages. She also writes poetry in Hindi. She is a founding member of a day care centre for children with special needs in Lucknow.