A Satire In Magic Realism Form 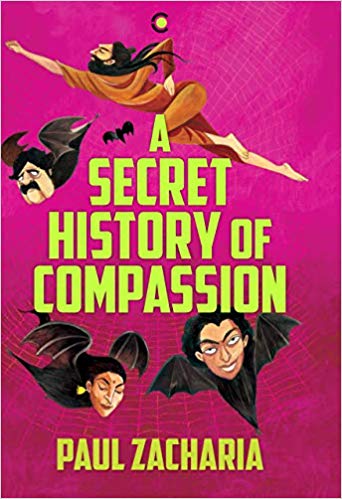 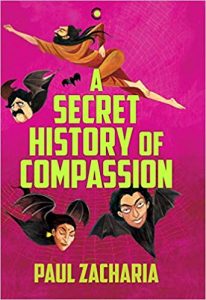 Paul Zacharia is a celebrated name in Malayalam literature. His oeuvre includes more than fifty books in genres ranging from collections of short stories to novels and collections of essays to books for children. A Secret History of Compassion is his first novel in English—and what a whirlwind read this book is! Calling this novel quirky would be an understatement. There are layers in this novel that are not immediately apparent, but a closer reading may connect several events in the novel to incidents from current times.There are three main players in the story: Lord Spider, ‘renowned author of mysteries, thrillers and romances’ who has published ‘[one] hundred and thirty-one [books] in all’; Rosi, Lord Spider’s wife, ‘a freelancing philosopher’; and Jesus Lambodara ‘JL’ Pillai, a shape-shifting hangman-cum-carpenter transitioning between human, bird, and bat forms. There is a fourth important character too who does not do much, but he drives Spider into fits of obsession, adding more quirkiness to the book. He is Brother, Spider’s dog, who Spider suspects is an incarnation of Satan and Rosi’s boyfriend. If this map of characters sounds boggling, just wait for the plot.

Spider has promised the Communist Party that he would write an essay on compassion for them, but because his ‘shift from fiction to non-fiction had run into unforeseen, and what seemed to be mysterious, difficulties’, Spider was not being able to write the essay. Pillai comes flying into his house, first, in the form of a bird, and then, in the form of a bat, and helps him compose the essay. Some time during the writing, Rosi too joins her husband and Pillai in writing the essay. And witnessing this essay being written takes the reader on a roller-coaster ride of satire, social commentary, and idiosyncrasies, all of it described in a magical realism form.

Right from the first page, Zacharia starts shooting his stings of satire. The essay on compassion had been commissioned by the Communist Party ‘for the souvenir [the Communist Party] was bringing out to raise funds for a home for destitute comrades’ who ‘hadn’t been nimble enough to make it to green pastures at the right time.’ This line is sort of revelatory, making the reader wonder if that barb was aimed at the Communist Party.

There is subtle commentary on the current hyper-jingoistic state of the country too. An acquaintance of Spider, once married to an ex-soldier, considers herself a patriot and her favourite slogan is: ‘Death to the Enemy! How will patriotism succeed without Death?’

There are three things in this novel—apart from the whimsical way in which it has been written—that stood out for this reviewer. First, throughout the novel, God has been imagined as a woman. ‘One thing [Spider] wasn’t willing to compromise on: he wished to be clothed—at least in a T-shirt and Bermudas. He simply didn’t want to present himself nude before God. She was a lady after all. But a terrifying question remained unanswered: Would She be clothed?’

Second, there is a seemingly audacious assumption that the Communist leader Joseph Stalin was a woman. ‘Pillai whispered: “Sir, a migrating bird from Siberia once told me that while sitting on a Kremlin window sill late at night, it had seen Stalin undressing in his room and nearly fainted when it saw he was a woman. The moustache was just a stage prop. He was woman all over.”’

There is an incident Rosi narrates about her grandmother, ‘a reputed Jewish seamstress from Kochi, who married one of the early communist leaders’, who had a ‘marvellous orgasm’ when the woman Stalin once embraced her.

Third, the credits to the song lyrics used in this novel have not been mentioned in the copyright page at the beginning of the book. Instead, in keeping with the quirky narration, the credits have been inserted in the text itself. When Pillai, in bird form, first sees Rosi, she is humming a song. On being asked by Spider which song Rosi was humming, Pillai answers: ‘I could immediately identify the song she was humming. ‘Jaayiye aap kahaan jaayenge’; singer: Asha Bhonsle; music: O.P. Nayyar; lyrics: Majrooh Sultanpuri; film: Mere Sanam; banner: G.P. Sippy; vintage: 1965.’

There are more audacious—maybe even controversial—passages and quirky characters in Zacharia’s novel, and each one seems to be competing with the other to be more outlandish. There is a woman named Mary whose daughter lives with her husband in the Solomon Islands and the couple ‘run a farm growing aphrodisiacs that also uplift the higher soul’, while Mary’s son, ‘having studied psycho-taxidermy in Washington DC, runs an international nursery for girl suicide bombers in a secret location.’

At 431 pages, A Secret History of Compassion might appear to be intimidating, but the characters of Spider and Pillai are so endearingly drawn and the writing is so quirky and humorous that this reviewer just followed their adventures without once wondering why the essay was not being written. It is remarkable that this novel moves entirely in a linear manner without diverting into any flashback, sub-plot, or a story within a story, which makes reading this novel quite akin to listening to a storyteller telling a seemingly never-ending tale, creating characters and events out of thin air as the story progresses. The book has been beautifully produced and illustrations by Priya Kuriyan of bats, flying godmen and spider webs add to its charm. Zacharia’s first novel in English is a brave—and even ambitious—book that shows several sparks of brilliance, the most prominent one being the author’s ability to keep the reader engaged.

Hansda Sowvendra Shekhar is a writer and his latest novel is My Father’s Garden.