A Searing Portrayal Of Adolescence* 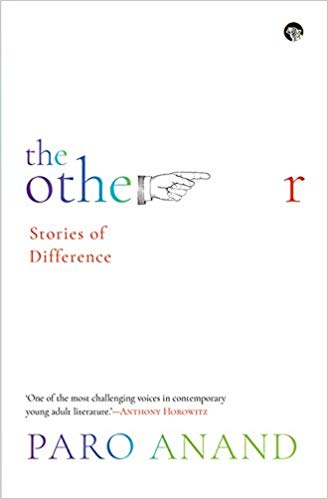 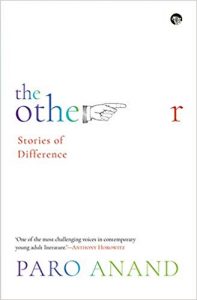 For the longest time there has been an invisible line, an unwritten rule that prevents writing meant for young readers from straying too far into the unknown and by extension, the ‘unsuitable’. The Other: Stories of Difference by Paro Anand is a collection of short narratives that aims to bring to light the experiences of those who lurk at our society’s margins. Anand dares to take her young adult readers down a dark path to the far reaches of society, which in reality aren’t that far from the realities of everyday adolescent life.

Most of the stories are set in contemporary urban, unnervingly familiar settings which help to better situate the plot. This also helps the reader to identify more easily with the stories, as they unfold within the confines of an intimate friendship, a busy school ground, a cozy living room or a loving family. However, identifying with Anand’s characters and their situations brings forth an uncomfortable feeling on the part of the reader. As the cover typography emphasizes, Anand not only aims the spotlight at subaltern voices, but also points a finger at those who for so long have suppressed or ignored these stories.

Each story takes on a stylistic life of its own as it narrates the experiences of its protagonist. Anand attempts an almost parodic take on the popular fairy tale in her story ‘So, Cinderella’. Set in the modern day it tackles head-on issues like body shaming and the struggles of the differently abled. Like several of the other stories in the book, this particular tale is told from a unique vantage point, that of one of the infamous ‘Ugly Sisters’. In her righteous tirade, this previously ignored sister brings to light the pain that labels related to physical appearance cause those who are made to bear them. Anand is bold enough to have her characters flout political correctness to lay bare the reality of society’s standards of beauty. But Paro Anand does not present a one-sided rant that would nullify the book’s premise. The favoured one, Cin, also experiences a sense of otherness which is not left unexplored.

The narratives titled ‘Inner Circle, Outer Circle’ as well as ‘Best Friends Forever’ also adopt unusual points of view to give voice to pertinent issues. The former presents a guilt-inducing view of a sexual assault, as seen by an adolescent who like all the other bystanders chose to conveniently stand on the margins and look on as the crime was committed. The youngster is later horrified by her own unwillingness to step forward when confronted with injustice. Paro Anand does not advise blind retaliation but rather offers options like social media campaigns as possible avenues for protest for those who find themselves in the outer circle looking in on injustice. On the other hand, ‘Best Friends Forever’, is a story narrated by a young Saudamini (lovingly named Peanut or Puchka by her father) whose new-found best friend reveals his own numbing confusion over his gender identity. She is left at a loss regarding how to comprehend her friend’s predicament, and so is the author. As Anand appends in a note, sometimes writing the Other is prevented by the sheer inability to understand wholly their story.

The book makes its most profound and moving journey into experiences untold in ‘Learning to Love Again’. Here Anand presents the crushing aftermath of rape not only on the victim but on all those connected with the incident. Shifting abruptly between voices, the narrative embodies the characters’ brokenness. Paro Anand pointedly turns away from discussions condemning the depravity of the perpetrator, the nature of the assault or the legal proceedings that would typically ensue. She chooses rather to focus on the victims of the crime and such unconsidered consequences as the fear of attack that springs up in the victim’s close friend, the wilting of teenage attractions in the face of such violation and the grappling in the mind of the perpetrator’s family as they along with all the other characters struggle to answer one question—why? But here Paro Anand too comes up short. The incomprehensible brutality of rape means that question can only be met with silence.

This all-embracing narrative of otherness reveals the struggles of those who are not marginalized in an overt manner but still struggle to stay afloat in the mainstream. The other stories in this collection draw close to reality as they focus on issues such as carrying the burden of grief at the loss of a loved one, while throwing off the veil of stigma that surrounds seeking medical intervention for psychological struggles. Anand succinctly exposes the less easily visible but still strong caste and class hierarchies that run rampant even on school playgrounds in her story ‘Because Superman Has Better Things to Do’. Another school-based story ‘She Walks between Raindrops’ invites the reader to look more closely at the process of othering that takes place where we least expect it to. This particular narrative is told by a young boy with a medical condition that causes him to be shunned until one day someone notices and accepts him.

All the narratives in this collection are written in the dialect of the urban Indian youth. While they depict experiences of crushing defeat and helplessness, every story ends with a flush of empowerment. Most of the adults in the book are either mere bystanders or serve as support systems as the young adults take centre stage. They take control of their own situations and help break down barriers of exclusion.

The final story ‘Going Off Grid’ almost seems autobiographical as it deals with the difficulties of standing up alone for those who are shunted by society, in the face of ridicule and scorn. The protagonist of the story nearly gives up this futile task but like Paro Anand she realizes that without her the voiceless would remain so, unheard.

Tara Saldanha lectures in English literature and language at the undergraduate level and looks forward to undertaking doctoral research in the near future. She emerges periodically from beneath a pile of books to write about what she loves.