A Sport Beyond Barriers 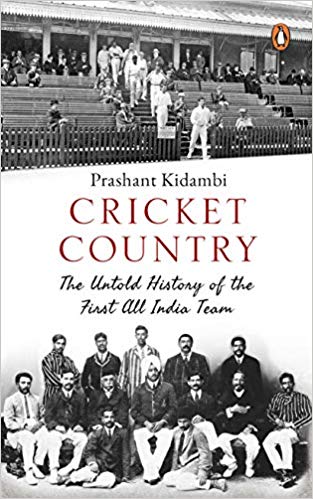 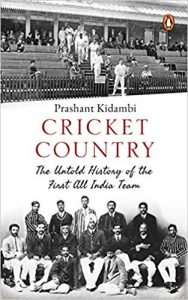 Prashant Kidambi’s Cricket Country: The Untold History of the First All India Team is ostensibly about the first Indian cricket team to have toured Britain. However, in reality, the book is much more than that. It is about how sport helped dissolve national, caste, class and community barriers in the British Empire, but in many instances exacerbated them. A central theme of the book is also the role of cricket in forging an Indian national identity.
Ramachandra Guha, among others, has documented the All-India team’s 1911 tour. Kidambi brings to this fascinating tale extensive archival research and fleshes out of the back-story and its principal characters. Kidambi begins his highly readable and meticulously researched narrative with the Parsis, the first Indians to take to cricket in an organized manner, and ends with an account of the 1911 tour and its impact.

Guha in a A Corner of A Foreign Field has chronicled the Parsi pioneers and their early efforts to play cricket. JM Framjee Patel was one of the principal characters in the organization of Parsi cricket and the moving force behind the 1911 tour. He was also the captain of the Parsi team that won a famous victory in 1890 against a visiting English team.

Kidambi has mined the archives to add fresh detail to Parsi club cricket in Bombay, their contests with the British and the two Parsi teams that toured England. Besides citing publications like Rast Goftar and Kaiser-e-Hind to document Parsi cricket in Bombay and the politics around it, Kidambi refers to a range of British provincial newspapers, such as the Bristol Mercury and Cheltenham Chronicle, to add delightful detail to the Parsi tours of England. For example, a spectator noted during the 1886 Parsi tour of England: ‘They [the Parsees] are handsome young men of the Eastern type, but with more of the cut of students than athletes. Elegance of form—I might almost say effeminacy—rather than strength is their characteristic’ (p. 28).

It was in 1898 that for the first time the idea of sending an Indian cricket team to Britain surfaced. The English journalist EHD Sewell was an enthusiastic proponent of the idea. But it was Framjee who took the idea to fruition despite a few aborted attempts. Indeed, it was the question of representation and Parsi dominance that doomed an attempt in 1904 when most arrangements had been made, including reservations on the P&O steamer Caledonia. In a renewed attempt, Framjee got together leading representatives of Parsi, European, Hindu and Muslim cricket in Bombay at the office of industrialist Ratan Tata in September 1909. Nine months later, the decision was eventually taken to send an Indian team to England in 1911. The team that was selected in March 1911 was representative of all communities.

The colourful Maharaja of Patiala, Bhupinder Singh, about whom the British had plenty of misgivings, was chosen as captain. The political agent stationed at Patiala noted that he would have preferred that the Maharaja was not the captain, but correctly predicted that he would not ‘play much cricket in England’ (p. 199). The Maharaja hardly played any matches during the 1911 tour, devoting more time to polo and other activities than cricket.

A notable absence from the team was India’s best-known cricketer of the time, Ranjitsinhji or Ranji, whom Framjee had always wanted to lead the Indian team. At a function to honour the team before its departure for England, Framjee regretted: ‘only one great name is missing from the list selected, it is that of HH the Jam Saheb Ranjitsinhji. All I can say is that I have left no stone unturned to secure the greatest cricketing asset of the country for team, but unfortunately without success’ (p. 201). Ranji, whose disinterest in Indian cricket is well documented, consistently refused to have anything to do with an Indian tour to England. Indeed, the lack of crowds in the matches played by the All-India team in England could partly be attributed to the absence of Ranji. One newspaper commented that Ranji’s ‘presence, his wonderful skill, and his still more wonderful knowledge of the game would have enormously strengthened the cricketing quality of the side’ (p. 320). Another uncharitably noted that none of the Indian cricketers was ‘worthy, in a cricket sense, to black “Ranji’s” boots; no one, indeed, who stood out above his fellows in combination of mediocrities (p. 322).’

The Indian team did not fare very well on the 1911 tour, losing most of their matches. One newspaper commented that the Indian side ‘batted like a well-coached public school eleven in a rather poor year’ (p. 323). The only player who consistently performed well and drew praise from the British press was the Dalit cricketer Palwankar Baloo. The Manchester Guardian wrote, ‘Among the bowlers Baloo is quite first rate. He has a complete mastery of spin and break, and he varies his pace and length very cleverly’ (p. 322).

Kidambi places the Indian cricket tour in the context of other events that were happening in England in 1911. These included the coronation of George V, the Festival of Empire and Imperial Exhibition being held at the Crystal Palace in London and the Universal Races Congress. He describes London through the eyes of two travellers from India—Thottakadu Ramakrishna Pillai, a writer from Madras, and Nyaypati Ramanujswami, a lawyer from Berhampore–who were visiting London at the time and left accounts of their trip. A Bombay merchant even floated a proposal to take a group of upper caste Hindus to Europe to coincide with what it described as ‘four great events’: the King’s coronation, the Indian team’s cricket tour, the Derby and the imperial exhibition.
Kidambi also describes other sporting events in 1911 where little-remembered Indian stars took part. Among these were the now forgotten Parsi racquets player Jamsetji Marker, who participated in the world racquets championship, as well as the wrestler Ahmad Baksh, who was fighting and easily defeating European opponents. Another unique Indian personality who was performing in London at the time was Kodi Ramamurti Naidu, also known as the ‘Indian Hercules’, who showed off feats of strength and endurance. The Health and Strength magazine reported on Ramamurti’s feats, including an elephant walking over him.

Kidambi’s book is thus not just about the Indian team’s 1911 cricket tour, but on the place of sport in the British empire, both in the metropole and the colonies. The author does so by combining deep research with delightful storytelling. Perhaps the only drawback of the book is its tendency for excessive detail and a retelling of some elements of the backdrop of the 1911 tour—admittedly with much more details—that have already been documented by other authors. The author gets to the Indian team’s arrival on English shores only on page 204 of the book. It’s almost as if the author could not bear the idea of discarding little-known, though often delectable, details that he had gathered. This is a foible many of us suffer from. A good editor might have trimmed the length of the book and possibly expanded its readership, something that Cricket Country richly deserves.