A Tale Told From The Margins 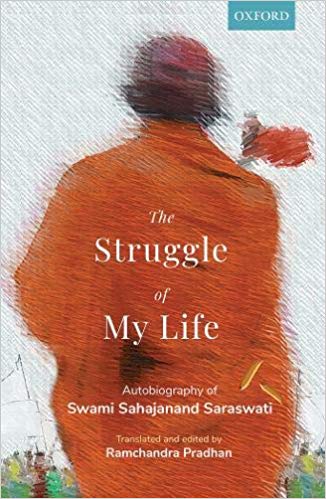 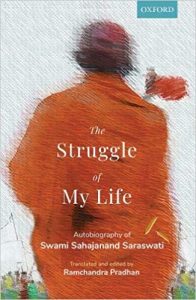 Of the seven books written by Swami Sahajanand Saraswati in the Hazaribagh Central Jail between 19 April 1940 and 7 March 1942, Mera Jeevan Sangharsh or The Struggle of My Life is the most important in terms of style, substance and historical significance. First in the series, he ‘started working on it the moment he reached the Hazaribagh jail’ (p. 355), the manuscript was completed within eight months in December 1940 and covers his recounting of the major events and issues upto April 1940 when he was imprisoned. He added the last chapter in 1946 as the postscript which unfolds the events between the time of his release from jail (8 March 1942) to 1946. But the book was published in 1952, two years after his death by the Sitaram Ashram at Bihta which he created in 1927 as the headquarters of his activities.

It is a curious fact that Swami Sahajanand Saraswati whom the peasants hailed as their saviour and emancipator and the historians considered as the most charismatic kisan leader and who authored several books in Hindi, Sanskrit and English had little formal education as he was educated only up to class IX. Through self-study he acquired adequate knowledge on various subjects and also writing skill. He had the vision, courage and organizing ability to plan the political mobilization of the peasants against the Raj and the zamindars.

The first hundred pages cover his early life, education, marriage and formative years that he wished to be made public after his death. Some other issues of his close and active interest such as his religious and spiritual quests, his engagements with self-studies also figure in the narrative.

Swami Sahajanand Saraswati began his public activities as a social reformer of the Bhumihar Brahmin community and gradually plunged into the ensuing nationalist politics in Bihar. The next two chapters encompass a wide spectrum of social and political issues, which became a cause of much concern for him. On the social front, perhaps enthused by the idea of upward mobility he has tried to push the Bhumihars to the Brahmin category providing empirical evidence. To champion the causes of the Bhumihars and to claim a Brahminical status for them he chose the Bhumihar Brahmin Mahasabha, which was formed in1889 as a platform. Before long, however, he discovered that there were definite limits to the influence he could exercise on such a caste-based organization and it could be hard to launch struggles for a greater cause under its auspices. He also felt that the Mahasabha was dominated by large zamindars who had pro-British and anti-peasant orientation. Further, his exposure to the Noncooperation Movement and association with Gandhi inspired him to outgrow from casteist politics and develop a progressive outlook. He began to disassociate from it and finally became instrumental in its dissolution in 1929. The text also reveals that from then onwards, he remained free from all such parochial barriers and his line of action began to be determined by liberal, inclusive and class considerations.

Swami Sahajanand Saraswati met Gandhi for the first time on 5 December 1920 at Patna. He became Gandhi’s staunch follower, plunged into the Noncooperation Movement and was imprisoned. His observations of the Nagpur and Ahmedabad Congress sessions, his experiences in various jails and the creation of Sitaram Ashram at Bihta which later emerged as ‘a symbol of revolution’ also find a substantial place in the description.

The remaining parts of this autobiography uncover the Swami’s reflections on a wide variety of issues, events and concerns relating to peasants, anti-colonial movements, zamindari system, organization of zamindars, the United Party, elections to the Central and Provincial Assemblies in Bihar and the formation of the Congress Ministry there. He goes on to record Sardar Vallabhbhai Patel’s anti-kisan stand and Subhas Chandra Bose’s pro-kisan attitude at the Haripura Congress in 1938. Similarly, he accuses the Congress Ministry for not keeping the promise to give relief to the kisans. In protest, he organized several demonstrations against the Ministry. They also reveal Swami’s understanding and analysis of caste and community-oriented consciousness in Bihar in the 1920s and 1930s. However, the central theme of the story is how Swami Sahajanand Saraswati created the kisan organization in Bihar; expanded it as a powerful all-India body and mobilized the peasants under its banner in such a radical manner that created conditions under which the Congress Government in Bihar and elsewhere in India decided to undertake agrarian legislation and implement land reforms which ultimately led to the abolition of the zamindari system.

On the whole, the book is an eyewitness account of a visionary political figure and the leading light of the kisan movement in modern India. It is an important exercise and creates a valuable record of events and struggles that took place during the tumultuous years of India’s liberation movement.

Yet, there are certain vital gaps in the book as it does not shed light on the political revival in the country after the arrival of Simon Commission in February 1928 and on the polarization of political opinion on communal lines after the publication of the Nehru Report in August of the same year. Likewise, the Quit India movement which was the last assault on  British rule does not even find  mention. Besides, it does not offer a narration of the political developments in the 1940s leading to  Independence and Partition of India.

Professor Ramchandra Pradhan has done a commendable job by translating this book written in colloquial Hindi with frequent use of traditional lore into English. Further, in the process of editing he has streamlined and fine-tuned the text. His well-researched and comprehensive introduction brings out the neglected legacy and the life-long services of Swami Sahajanand Saraswati to the cause of the peasants in particular and to the cause of the nation in general. However, he has not added explanatory and biographical notes which would have enriched the text.