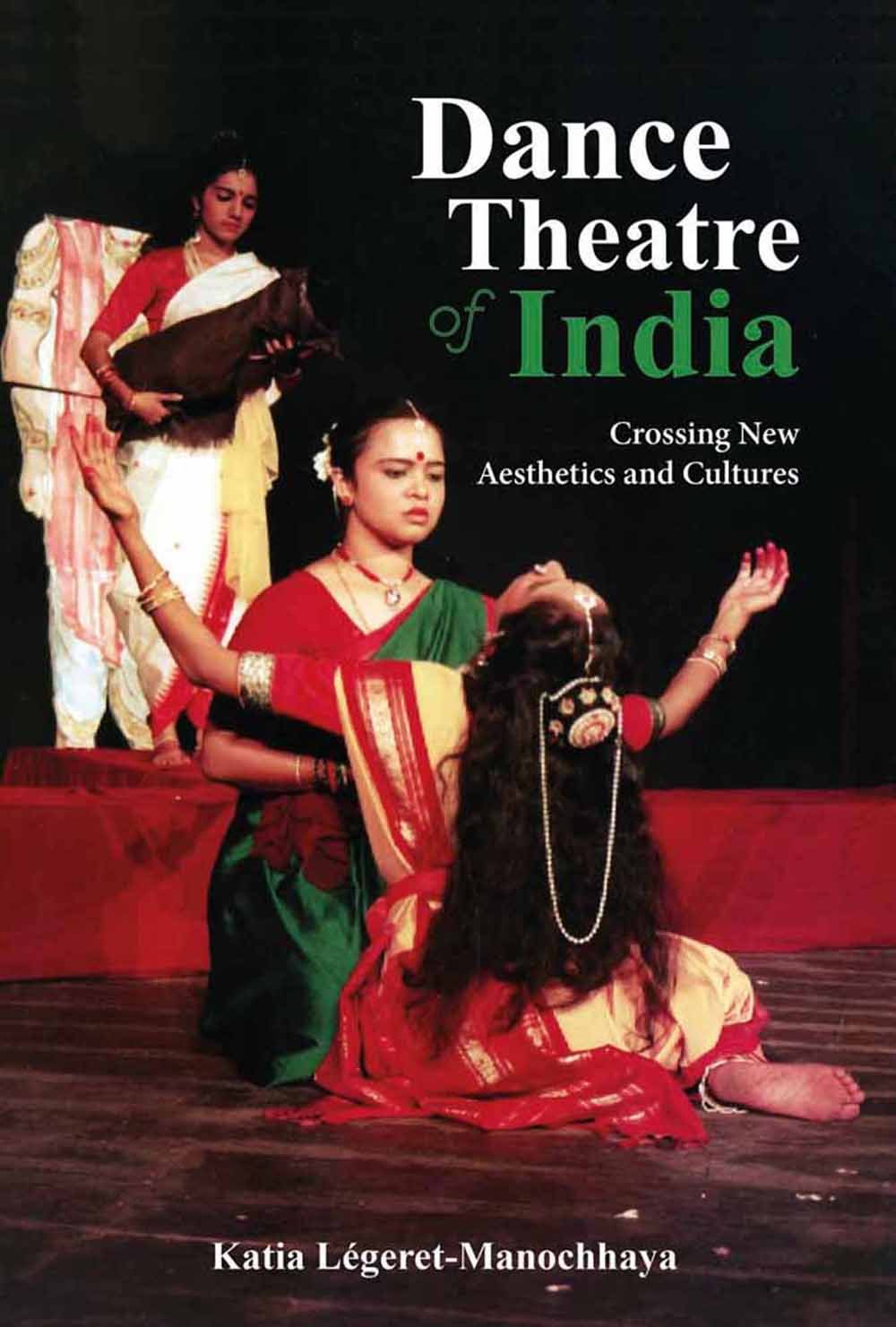 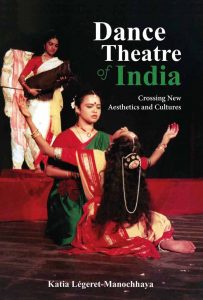 Reading through Dance Theatre of India: Crossing New Aesthetics and Cultures, there are two questions that arise from the preface itself: 1. Who is the intended audience for this book? And by extension, who then should the reviewer be? 2. What are the basic assumptions and attitudes that seem to underlie the lens of research and the form of writing?

The first sentence of the preface sets the intended frame for the book. It ‘discusses the conditions for creativity in Indian theatres and dance when these are in certain specific contemporary contexts which involve a relationship with people from other countries and alterity.’

The contemporary contexts and other people mentioned in the opening sentence are not clearly identified, while how practising artists may choose to (or not to) deal with them is enumerated quite clearly and intelligently. Immediately, one finds a distance between the opening statement, and the initial questions that are articulated. Where and who are these ‘people from other countries’? Where is the alterity or otherness being experienced? Who is it being experienced by? This hiccup within the first few lines echoes through the book—who is this book written for, who should read it and why, therefore, becomes a confusing terrain to navigate.

This question resurfaces often in a text that can’t seem to decide on the extent or nature of factual, descriptive or analytical detail to offer. In the beginning of the first chapter that addresses the theory of Rasa, the author states: ‘It generates two aesthetic pleasures in spectators; one emanates from the sentiments of love whereas the other comes from the heroic sentiment.’

If one is to read this as an uninitiated ‘western’ reader, then this is most misleading and a huge simplification of the Rasa theory that forms the aesthetic core of the Natyasastra. If one is to read this as an initiate, then one has the option either to fill in the blanks of interpretation the author may be basing this statement on, or refute it knowledgably. Either way, the first chapter of the book begins with this erroneous, misleading and incomplete statement–and this cannot be overlooked in analytical writing.

The rest of the first chapter, however, is, for the most part, an astute meditation on the ‘perfect actor’ as capable of controlling his/her own artistry like a skilled puppet master, able to observe and be moved by his/her own art as a viewer and not as a performer, deftly controlling even emotional states. The author uses the wonderfully evocative term ‘dynamic resonance’ to describe the non-hierarchical relationship between body language and text in Indian theatre.

Herein lies the problem with the text: it alternates between a sometimes insightful philosophical meditation on conceptual topics to a rather dry, even naïve, run-down of what may be an answer script from a junior student of performance. Additionally, these two modes of writing run into and out of each other continuously, making it extremely difficult for the reader to decide on how (and even why) one should access the book.

Many long descriptive passages of artists’ processes, rehearsals or actual performances are almost impossible to navigate for anyone not already familiar with the practice of such traditional forms; for them, these passages are far too superficial to make for interesting reading. What is most illuminating and absorbing are sections where she describes her own guru’s work: for example, when he created three very different pieces with three different foci for three students from different cultural and religious backgrounds, based around the same central myth of Samudra Manthan. However, the analysis around this seems laboured and forced, unless one assumes that this act of creating three different pieces is a novel one for a cultural practice that is passed on through an oral tradition. This reveals the second grey area, the highly problematic Eurocentric assumptions and attitudes that pervade this book.

The book is replete with references to the work of Peter Brook, Ariane Mnouchkine, Richard Schechner and others who were instrumental in opening up the area of intercultural theatre through their engagement (or a cut-paste borrowing?) of Asian performance forms about fifty years ago. Referencing their pioneering work is not a problem in itself, but to do so uncritically when the politics of their work and the whole area of intercultural theatre has been vociferously questioned by both Asian and European voices, seems wilfully blinkered. It leads one to automatically (and perhaps slightly unfairly) question the later work that she writes about, some of which she has been involved in. Playwright and poet HS Shivaprakash in the interview that concludes the book perhaps speaks the most scathing critique of this aspect of the book: ‘What would Eugenio Barba be without Kathakali? Or Richard Schechner minus Ramlila?’ Unfortunately, the irony seems lost on the author!

Speaking of being wilfully blinkered, in the second chapter the author refers to the renaming of Sadir as Bharatanatyam and to the fact that now ‘other’ castes and foreigners can train in it. But there is no mention of the complete bowdlerization, and indeed Brahminization, of the form in a process that left many original devadasis destitute. So the sea-change of the 1930s in Tamil Nadu was not a ‘radical break with caste and temples’ as she would have us believe, but a ‘cleansing’ to appeal to Victorian middle-class morality and fit the form firmly into a conservative Brahminical temple society that shunned even the suggestion of the erotic. This fits in cosily with the ‘ancient India of pure and high art’ rhetoric, while completely ignoring the deeply uncomfortable underbelly of recent Bharatnatyam history. When one is talking of heritage and oral transmission and transformation as a researcher, it is deeply disingenuous to wholly neglect this area.

There are several glaringly unforgivable factual errors as well. Akram Khan is referred to as Indian, then as Bangladeshi and then as Indian Bangladeshi. The author describes Draupadi, a pivotal character in the Terukoothu tradition, as taking revenge for the Pandavas’ humiliating exile by bathing her tresses in Duryodhana’s entrails. No mention is made of her disrobing at the hands of Dushshasana, or even of Dushshasana at all. The hand gesture of hamsasya is translated as the feather of a goose, while the word ‘hamsa’ refers to swan. The two birds conjure up very different poetic associations in relation to dance and Hindu philosophy and iconography. Again, who is the book aimed at?

The later chapters fare better than the earlier ones. Her reading of animal gestures as a political act of resistance is refreshingly insightful. The chapter on the collaboration between Columbian director Rolf Abderhalden Cortés and the Terukoothu performers from Purisai largely removes itself from a Eurocentric position, and opens up a different layer of discourse. Overall, though, these segments of the book work more on an anecdotal rather than analytical level.

Appalling translation, and even more appalling editing extensively hamper the text. What is one to make of a sentence such as this? ‘Without breaking this tradition, the last part of a recital usually ends with parts played very, narrative, language Kannada.’ And this is only one of the less incomprehensible language constructions one is forced to negotiate.

The book is ultimately a series of responses without an adequately defined or problematized area of exploration. If the provocations or contextual circumstance are assumed to be common knowledge and accepted experience, the author falls into the very trap of much of colonial / postcolonial writing on art that she says she wishes to avoid. While she is understandably hesitant to use western categorization and terminology when talking of Indian traditional dance practice, she labels Bharatanatyam as a form of dance theatre. This term is just as western, specifically German, in its history and context, and is a lazy approximation of the Sanskrit ‘natya’—lazy, not because another term could/ should be found, but because of the absence of redefining it to use here.

Vikram Iyengar is a dancer, choreographer, theatre director, performing arts researcher and writer, arts manager and curator based in Calcutta, India. He is co-founder of the kathak-based performance company, Ranan, and initiator of The Pickle Factory —a hub for dance and movement practice and discourse.