A Tribute to Lost Voices 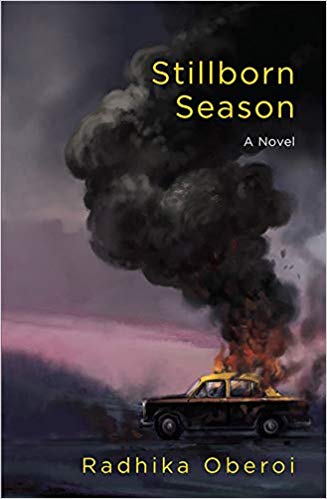 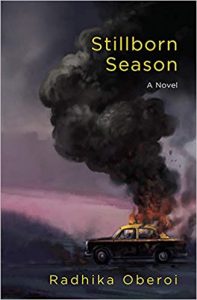 ‘The spirit of blind revenge coalesced with the lure of brigandage and vast stretches of the country gave the impression of a community slaughter house set aside for human species.’

An excerpt from an article published in the Economic and Political Weekly, November 3, 1984 sums up the aftermath when the Prime Minister was shot dead on October 31, 1984. As someone who was born just a day before this happened, I have no memories of the monstrosities that unfolded for days to come.

Radhika Oberoi opens up that closed box of horrors in her book Stillborn Season for people like me to understand the level of pain that one went through across the capital in those days. The cover photo of the book speaks volumes, an Ambassador taxi in flames with a sky tinged with hues of red. The black smoke that fills the book cover makes its way inside the pages in the form of incidents that concentrate on Delhi in this book. It is 1984 once again.

The book does not become a pamphlet which speaks only about the event and what happened to a particular community as a backlash. The book in fact deals sensitively with the fears that arose in people who were being targeted. From a retired Army officer who is glued to his television set for further news updates; to a young married couple who live in a barsaati to a shop owner who hides in his cupboard full of Pashmina shawls, the accounts of varied people give a jolt, to say the least.

Delhi takes on a colour in the novel that it hasn’t seen since those days. Seen from the eyes of the Sikh community, there is a thread that binds them all together. The chapters in the novel coalesce together at times and at times diverge to help these characters bring forth their histories. Everyone is given a voice. The stories build up to a crescendo. There are no violent endings in these stories but they build up that fear and the pain that people witnessed and went through.

Fiction has a role to play in bringing out those uncomfortable moments that otherwise can get lost behind numbers and facts and Oberoi uses this genre really well. The dexterity with which a sutradhaar, the main storyteller, has been introduced in this novel is worthy of applause. We are introduced to a small girl Amrit at the beginning of the novel, who defies the admonishments of Major Budhwar and continues to come over to meet her friend, his grand-daughter. Amrit becomes the sutradhaar of this novel. Moving from a child to a young journalist, she continues to ruffle the pages of historical narratives as well as the calm exterior that has blanketed and hidden memories from the minds of people. The most moving and powerful episode is in the first chapter, of the successful attempt of an old man to change his guise to avoid the mob. I will not reveal it here as it definitely has to be read in the book but this episode matches the powerful voices of the Partition writers. The fear mixed with the desperate measures taken to stay alive brings back to life the upheavals that history has caused in the lives of people from time after time.

The Delhi of the 80s has been remembered through the description of its roads and the places people inhabited, from Punjabi Bagh bearing traces of a refugee colony where neighbours ‘swapped recipes over cracked walls or borrowed a glass of milk for an unexpected visitor’ to neighbourhoods in South Delhi where ‘roads were punctuated with parks and the sky was livid with congregations of sparrows, crows and somersaulting parakeets bursting with song’ to Chandni Chowk with its ‘crumbling buildings and rickshaws that bumped into one another as they wound their way through piles of garbage, cow dung and children playing pithu…’

The remembrance is to be found in these details —these minute details that make a city breathe and come to life. These people documented here through stories are not just fictional characters; they embody a generation that lost a lot for no fault of theirs. A bookshop owner at Nai Sarak, who dies trying to save his shop—the only witnesses left are the faded bloodstains on the pages of a few books; a taxi service owner who philosophizes about one’s existence—‘ a tiny speck of dust, a grain of jowar or bajra being sifted in a wicker sieve…’; Bhola, a beggar who crawls around on his wooden platforms at the Bhikaji Cama intersection—who saves a man from getting lynched while those who sit at a nearby tea shop discussing politics do nothing but watch and hail him as a hero—there are so many instances that fill this book which make one pause to take it all in. It is not a book that you can sit down and unwind with ease. The book gives you just the right amount of light to open your eyes wide and see things for how they were and how those voices continue to haunt some of us.