An Ode To Dilli: From Decadence To Despair 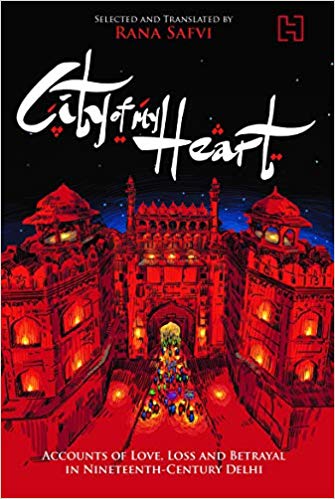 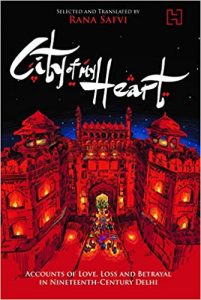 The Mughal years are a fascinating period in our history. It is a period that is sought to be whitewashed by the current dispensation. Roads named after Mughal emperors are already in the process of getting appropriated and renamed and history glorifying the non-Mughal leaders is being rewritten. In such a time, Rana Safvi’s City of My Heart takes us back to the Delhi of the Mughal Empire, not in its heyday, but during its last vestiges. The book is an account of how various festivals and occasions were commemorated in Old Delhi through a translation of four Urdu accounts of how life was in the last days of Mughal rule in Delhi. It is indeed an account of loves, losses and betrayals as indicated by the title.

Dilli ka Aakhiri Deedar (The Last Glimpse of Delhi) by Syed Wazir Hasan Dehlvi; Bazm-e-Aakhir (The Last Assembly) by Munshi Faizuddin; Qila-e-Mu’alla ki Jhalkiya’n (Glimpses of the Exalted Fort) by Arsh Taimuri and Begamat ke Aansu (Tears of the Begums) by Khwaja Hasan Nizami are the four evocative accounts that use English almost in the old andaz. The words flow like the shayari of the poets, and the Delhi of the time comes alive for the 21st century audience, especially those unfamiliar with this life and culture. All these writers were eyewitnesses to this period. Their accounts therefore are those of the insider, witnessing the death of an era and recording it for posterity. It is a world of transition, from relaxed decadence to one in which the succeeding generation of the last Mughal has to prove his identity in a court ruled by the British. As Zafar Sultan, the descendant of Bahadur Shah Zafar comments: ‘These rich people think that they can trample us under their heels. Sixty years ago, their ancestors were my servants. In fact, I ruled over all of Hindustan’ (p. 225).

And a little later: ‘The blood that runs inside me has now become used to being abused, oppressed and beaten up, but it was not always so. Where the judge sits today, I have ordered the punishment of several rebels and criminals. My heart and my mind haven’t forgotten those days, even though my eyes have not seen them for an eternity’ (p. 225).

The opening two chapters, an elaborate description of the Mughal court, talk of the Red Fort during different times of the year, the palace, the clothes and the cuisine and the court hierarchy. The latter chapters move through the passage of time, culminating in the sad story mentioned above that brings up the conclusion. In a way therefore, the book in itself is a journey through Old Delhi as it transitions from the late 19th century to the first decade of the 20th, from the Mughals being the rulers to the creation of New Delhi or Lutyens Delhi, the brand ‘new’ capital of British India and subsequently of Independent India. As the narrative states: ‘Dilli was Dilli because of the Dilliwallahs, who were full of love and empathy, who were there for one another…There was always a smile on their faces….Now such people are no more. The city is no longer Dilli—it is now Dehli’ (p. 46).

The descriptions of food—not just the cuisine but also the manner in which it is arranged. So, it is not just eating, but the process of eating that takes centre stage. These descriptions give the reader a valuable indicator of Mughlai cuisine as well as of the accompanying hospitality.

Other narratives in the collection describe the elaborate festivals like Holi, Diwali, Eid and Phool Waalon ki Sair. The fact that all these festivals were celebrated with equal pomp and splendour point towards the Ganga-Yamuna tehzeeb and the syncretic culture that has been a hallmark of Indian society since time immemorial. People celebrated together, they also joined each other in times of suffering. It also makes one sad, when one compares this to the atmosphere of hatred, dislike and polarization that has taken over our milieu today. I especially loved the description of the egg-cracking festival on Nauroz—a tradition that I was completely unaware of till I read this book:

‘In the afternoon, all the begums and princes gather to fulfil the omen of the fan. They throw fistfuls of gold and silver coins in the air, a tradition on Nauroz. In the evenings, all the salateen males come to the Diwan-e-Khas with Sabzwar hen eggs scented in musk and saffron. The Badshah sits on his masnad and now the egg fight begins. One salateen takes an egg in his hand and hides it, leaving only the tip exposed. A second salateen tries to aim at it with another egg. When the egg breaks, his supporters start celebrating, “He has cracked it!”’

Rana Safvi’s translation is lucid and vivid and brings the period alive for the modern reader, and especially those unfamiliar with the culture of Old Delhi. As Shamsur Rahman Faruqi writes in his Foreword: ‘The Urdu texts translated…are key elements to understanding the social and cultural life…of the Exalted Fort. This translation performs a much needed service and corrects the perspective by which the first half of the nineteenth century has so far been viewed.’

The appendix is useful. Part glossary and part encyclopaedia, it is crucial to understanding the non-translated/translateable portions of the text. And to conclude therefore, one can compare this collection to an array of exquisite paintings that one sees in the Renaissance museums, except that here, they are created with the pen rather than the paintbrush:

(They weren’t so much the alleys of Delhi as they were the pages from an artist’s sketchbook).