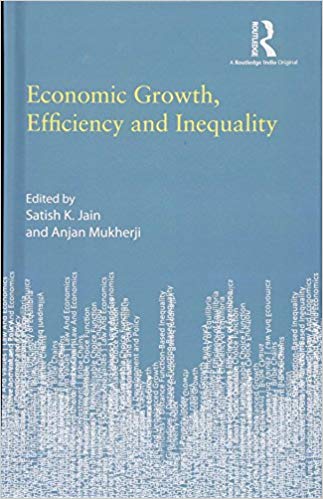 Economic growth is often considered as one of the most important indicators to measure the success of an economic institution. While few would disagree with the importance of growth, the bone of contention would be how to achieve it and at what cost. In economics the concept of growth is linked with the idea of efficiency. Efficient use of resources is supposed to be a major driving factor for economic growth. Researchers as a result often find themselves preoccupied with efficient rules and institutions. Efficiency however is not the only value that economists may be concerned about. There are other social and economic values that one may wish to consider and equality is one such value of immense importance. An outcome that is efficient does not necessarily satisfy the principle of equality. In fact, we often find ourselves in situations where we are forced to choose one value at the cost of another. The consequence of such choice needs to be evaluated carefully.

It is therefore imperative that to determine the desirability and purpose of an institution, which may or may not explicitly state its allegiance to some of these values, its outcome be examined thoroughly from the perspective of these values.

The book under review is a collection of ten excellent papers that analyse institutions, rules and policies from the perspective of growth, efficiency and inequality. The articles which are written by some accomplished academicians and some young and promising researchers, cover a wide range of economic institutions.

The first three papers are concerned with macroeconomic growth. Amitava Bose, in ‘Intersectoral Disparities and Growth’, uses a dual economy model and tries to detect the key variable that explains disparities in sectoral growth. The paper examines whether the sectoral growths converge over time. In the process it checks the validity of the ‘trickle down’ theory. Soumya Datta in ‘Cycles and Crises in a Model of Debt-Financed Investment-Led Growth’, looks for an explanation for the growth cycles that may emerge in a demand constrained closed economy. He makes a cautious claim that such cycles may have an endogenous explanation in the macro-dynamics of debt-financing investment. Gogol Mitra Thakur’s paper ‘Policy-Induced Changes in Income Distribution and Profit-Led Growth in a Developing Economy’, is concerned with the growth experience of several countries under neoliberal policies. While the post-Keynesian/Kaleckian literature suggests that these economies would stagnate due to worsening of income inequality unless they are able to increase their trade surplus continuously, in reality many of these economies have failed to maintain trade surplus; some even experienced increasing trade deficit. The paper tries to solve this intriguing puzzle.

Amarjyoti Mahanta in his essay ‘A Simple Dynamic Bargaining Model’, analyses a dynamic process of bargaining between two players over a surplus. The paper tries to determine the nature of outcomes that may arise through the bargaining process under different initial points of bargain and different rate of adjustment that the two players may choose.

Brati Sankar Chakraborty and Abhirup Sarkar in ‘Increasing Returns, Non-traded Goods and Wage Inequality’, examine the increasing wage inequality between skilled and unskilled labour in different parts of the world. The paper tries to explain the phenomenon in terms of increase in skill premium when trade is liberalized and traded good is produced in a monopolistically competitive market with increasing returns to scale.

S Subramanian in ‘Equality, Priority and Distributional Judgements’, takes us on a fascinating journey into the philosophical world of egalitarianism and distributional judgements. He begins with an analysis of the views expressed by Derek Parfit where a distinction has been made between egalitarianism and prioritarianism. He argues that the Pluralist Telic Egalitarianism is not vulnerable to the Levelling Down Objection and is also compatible with a Divided World situation. The paper questions the validity of Parfit’s view that a distinction can be made between egalitarianism and prioritarianism in terms of our concern over relative versus absolute levels of well-being.

Auction is one of the ancient forms of market, the relevance of which continues to grow over time. The book has two papers on auction. Rittwik Chatterjee in his paper ‘Contest under Interdependent Valuations’ derives and analyses the equilibrium bidding strategies of contestants, first under linear cost and performance functions and then under non-linear cost and performance functions. Srobonti Chattopadhyay and Rittwik Chatterjee in ‘Auctions and Synergy’ examine auction when the values are either superadditive or subadditive. In a model with two bidders and two units of homogeneous commodity they analyse Vickrey auction separately for positive and negative synergies. The paper then attempts to make a comparison between different forms of auctions under different assumptions about synergy parameters and valuations of bidders.

Law and legal institutions play an important role in shaping social and economic outcomes in our society. Economic analysis of these institutions has lately gained considerable importance. Satish K Jain in ‘Negligence as Existence of a Cost-Justified Untaken Precaution and the Efficiency of Liability Rules’, examines the efficiency of liability rules with a notion of negligence which is often used in courts but mostly ignored by the mainstream literature. Negligence can be defined in at least two different ways: (i) if the care level falls short of the due care level, or (ii) if there is some cost-justified untaken precaution available. While the former definition allows us to characterize efficient rules in terms of negligence liability, the later definition gives us an impossibility theorem that denies the existence of any efficient liability rule. The present paper can be seen as a continuation of some previous works by Jain. Although the impossibility result over a larger domain of application was known for some time, one however may wonder if there is any rule that would invariably generate efficient outcome when applied to a smaller domain of application. One important way to restrict the domain of application would be to consider cases where complementarity in the care levels of the two parties is ruled out. The paper shows that no liability rule is efficient for such a restricted domain.

The articles are refreshingly contemporary. The book would be immensely helpful for the researchers who specialize in the fields covered by the articles. Technicalities involved in the analysis would however, restrict its readership to scholars who have prior knowledge in the area. It is certainly a valuable addition in the collection of reference books.

Taposik Banerjee is with the School of Liberal Studies, Ambedkar University (AUD), Delhi.

Is this Azaadi? Everyday Lives of Dalit Agricultural Labourers in a Bihar Vilage by Anand Chakravarti is a study of the living conditions of Dalit agricultural labourers in Muktidih Village in southwest Bihar throws light on the problems they face in accessing the basic necessities of existence, including food, clothing, shelter, health care, and education. Their tribulations are conveyed through their own testimonies. Bihar is the poorest state in India, where the highest proportion of the population (79.3 percent), live in multidimensional poverty.