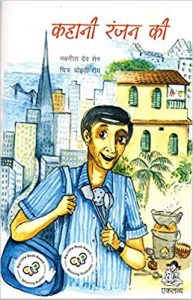 Ranjan is very weak in maths and fails to clear the examinations for two consecutive years. He gets rebukes from his father and punishment from teachers, because of which he develops a hatred for school.

Ranjan belongs to a well to do family of farmers. His father wants his children to take up professions like doctor, lawyer, judge or magistrate. His two elder brothers are regular in their studies but Ranjan is not interested in joining school again. His father is furious but his mother is sympathetic and takes charge of him. She teaches him cooking. He gradually becomes an expert cook. As luck would have it, he gets a chance to work in San Francisco. He ultimately settles down there with a regular job in a restaurant.

The book mostly narrates his journey from Laxmikantpur in Bengal to San Francisco. Without any knowledge of the English language he is left to fend for himself. Detailed descriptions of the air journey like boarding the plane, fastening of seat belt, meals served to passengers etc, give a glimpse of air travel to children, who may not have on opportunity to travel by air .

The illustrations by Proity Roy are eye catching and will interest the children. Bengali words, mostly proper nouns, that are used have been listed with Hindi equivalents in the final pages.

The story gives a massage that succeeding in examinations is not essential to be successful, if one is hard working and interested in doing the job which he likes.

The story is translated from English. Nabaneeta Dev Sen is a well known writer, poet and academic, has won several awards including the Padmashri and Sahitya Akademi award. 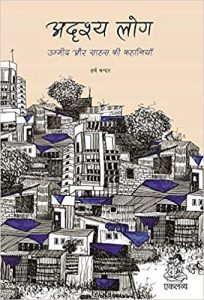 Harsh Mander, the well known social activist, has written twelve stories about deprived and physically handicapped children. They are neglected not only by the society but by their own families. All of them are real life stories narrated to the writer by the victims of their circumstances. Some of them were brave enough to face the adverse situation by their courage and were able to lead normal lives. Some of them educated themselves like Rahul, Mogalamma and Rajmane. They also helped other victims with the knowledge gained. The corrupt system prevalent in the police as well as the judiciary are responsible for the sufferings of the innocent victims. Many stories are based on the Godhra riots in Gujarat, most of whom were victims of police atrocities. They were confined to prison without trial for years tolerating insults and physical torture.

The book cannot be classified as children’s literature, but the young should read it to understand how hundreds of unsheltered young people are fighting for a better life with a lot of courage and hope.

By Shruti Rao. Illustrations by Priya Kurien. Translated from English by Varsha.
Eklavya/Parag Initiative, with support from the Tata Trust, 2019, pp. 68, R60.00 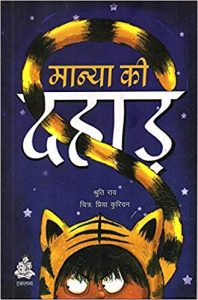 Manya’s school is going to participate in the inter-school drama competition. Shridhar Ali would be the teacher in charge. She selects Rudyard Kipling’s The Jungle Book for her school drama. The students of Class 5 are to act in this. Manya is very keen to play the role of Sher Khan and is sure that she would do justice to the character. But the problem is that she stammers a lot, specially when she is nervous. Her classmate Rajat is a bully and imitates her stammer whenever he gets a chance. This makes her nervous and she starts stammering more. Rajat is selected as the hero Mowghli and Manya is selected to play Sher Khan. Her English teacher and the Principal of the school are of the opinion that they are taking a risk by allowing Manya to play the role. Manya is afraid that the role for which she is so keen will be given to someone else. She decides not to participate as she has to face Rajat quite often in the play.

Shridhar Ali and Ankita, her friend, support Manya and encourage her to overcome her stammering. They along with Manya’s parents give her moral and emotional support and on the final day Manya learns how to roar.

The writer has very effectively portrayed the school atmosphere.

It is a collection of twelve stories written by members of the Association of Writers and Illustrators, most of whom are based in Delhi. Among the authors included are Nilima Sinha, Manorama Jafa, Indira Bagchi. Ira Saxena and Girija Rani Asthana. The subject matter of the stories is urban based. Stories like ‘Patramitra’ by Manorama Jaffa, ‘Janmadin ki Bhent’ by Shyamala Bhatia and ‘Suraj’ by Indira Bagchi touch the softer side of human behaviour. They motivate the children to follow examples of loving and caring. ‘Gunehgar’ and ‘Meri Saheli Roza’ narrate how the bullies harass the children and how better behaved children teach them a lesson by their own conduct. ‘Bijli Rani’, a long story by Nilima Sinha, a tale told in a humorous vein, is about the travails of growing up in the villages with no electricity and not proper roads, and how the two young protagonists manage to transform their own village by approaching the right authority in the city.

The stories refer to modern day issues of daily living. The language too is simple and easily comprehensible. This could have made for a valid instrument for cultivating the reading habit in children. However, they lack the element which promotes creative and critical thinking in the readers. 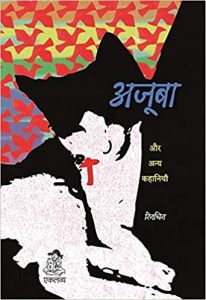 A collection of seven stories by Rinchin, the book under review is dedicated to those who inspired her to write their stories. Some of the stories have been originally published in journals like Shaikshanik Sandarbh and the children’s Science magazine Chakmak. There are two stories, ‘Ajooba’ and ‘Billi Chali Kaam Per’, in which the main characters are treated as human beings. ‘Ajooba’ is the story of Pani (water). It goes to a village, meets the village elders and seeks their permission to stay in the nursery.

Permission is given and gradually the nursery is green with vegetation and flowers. It becomes a favourite place for children and women-folk of the village. They spend their time in the nursery neglecting their duties. Pani becomes the favourite of young boys and girls. They imagine Pani as their lover. The village elders realize the problem created by Pani and decide to withdraw the permission. The nursery becomes dry in the absence of pani. But one plant grows on its own with white, pink and red flowers and on the third day it dies. It grows wildly everywhere without pani and people call it Ajooba.

‘Pichhe Chhoota Bhai’ is a story of sibling rivalry and one-upmanship. ‘Kauvon Se Ghiri Ma’ is a story narrated by a small boy about his mother. She is friendly and always helps others. Her husband has deserted her and her family had thrown her out. She lives alone with her son in the village. She is in relationship with a man who visits her daily at night. The women from the village come to her for solace when they are ill-treated by their husbands. The boy does not understand why the villagers call her a bad woman. For him she is a loving and caring mother. This is a lively story of a woman’s fight against patriarchal norms as perceived and understood by her little son.

‘Kajal’ is the story of a carefree girl, not interested in studies, and how life teaches her discipline and a sense of responsibility. ‘Billi Chali Kaam Per’ is an amusing tale of a woman who treat her pet cat as a human being and how the cat realizes that she has to work, that is catch rats, for her food! ‘Laddoo aur Saanp’ is the sad tale of Anil who belongs to the ‘reserved’ category and portrays how the invidious caste system dogs people right from the time they are children. ‘Jeet ka Jashn’ is the story of a cricket match. However, the natural excitement is overshadowed by apprehensions of a communal riot with its attendant violence and destruction of life and property. Will that happen again, thinks Rafiq, who is watching the match. The story unfolds the reality of India and what children have to accept and live through in this age of ‘othering’.