Blueprint Of ‘The Great Indian Novel’ 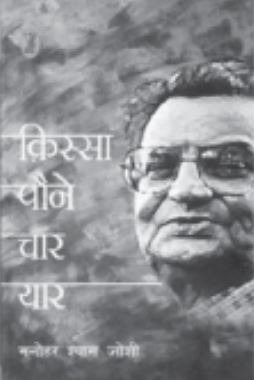 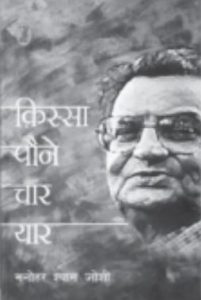 The late Manohar Shyam Joshi (1933-2006) was an extremely talented writer who tried his journalistic hand in various directions—politics, sports, culture and films. He edited a leading Hindi weekly—Saptahik Hindustan for many years and also an English publication. At the same time, the DD serial ‘Hum Log’ penned by him was the first soap opera on Indian TV followed by ‘Buniyad’ and ‘Kakka ji Kahin’. He wrote many popular film scripts as well.

Joshi’s most important and lasting contribution, however, was in the field of literary fiction.Through innovations in structure and style coupled with insightful exploration of the human situation and relations, he created a unique niche for himself. Remarkably, with all his innovations, his fiction remains quite popular. He wrote fiction early on, published a couple of stories in the fifties and sixties of the last century, but his first serious entry into fiction was made with Kuru Kuru Swaha—a brilliant novel published in 1980 when the author had turned forty-seven.

Obviously, Joshi had a very deeply rooted element of self-doubt, which in a sense, is necessary for any serious writer; but in the case of an excellent writer, this self-doubt seems to have taken a bit too much of toll. The book under review is an example.

Published in 2017, the present text was actually written in 1966-67. This has been now presented with a scholarly comment by Wagish Shukla and a helpful introduction by Prabhat Ranjan—who tells us that Joshi ‘missed’ his unfinished ‘novel’ fondly in his later life and wanted to finish it. Going through the ‘blueprint’, one can very well imagine how remarkable the finished product would have been. Incidentally, this text can also be read as a blueprint of the theme and treatment of Kuru Kuru Swaha—the first finished and the best (to my mind at least) of all the Joshi novels.

This little early text already has the Joshi touch with which all his readers are quite familiar now. This touch is characterized by deep scholarship, intimacy with cultural, lingual nuances and practices along with wide exposure to world literature and cinema. As in his other fiction writings (Kuru Kuru Swaha, Kasap, Kyap) this touch starts acting with the title itself. The word ‘Qissa’ evokes the cultural memories of the West Asian tradition of ‘Qissagoi’, which came to India and flourished here—remember the famous—Qissa Chaar Dervish, as well as that of narratives like Dashakumara Charitam (The Lives of Ten Young Men) from pre-Islamic India. Incidentally, It would be a gross mistake to render the word ‘yaar’ as friend in English. Anybody sensitive to idiomatic usage in Hindi/Urdu would know that ‘yaar’ here stands for a male in illicit and profane love.

The small text indicates a big ambition of exploring the social decadence along with the hidden underground of male sexual desire and fantasy at the same time. This is the ‘tale’ of four males in various forms of sexual desire for an adolescent girl. The three of them are seen by the narrator as full units, while the fourth is supposed to be only a half. The narrator himself is half of even half—hence the title, ‘A Tale of Three And Three Quarter Lovers’. The narrator wants to talk to all these males about their desire for this girl; the text presents the primary reports of his ‘interviews’ with three, the fourth (the half one) has not yet been approached in the present form of the tale.

These talks or interviews are about a profane desire, about male fantasies for a ‘child-woman’; and perforce, also about the ugliness of the entire social context. The text takes us to the heart of decadence outside and within us in a deceptively ‘playful, non-serious’ way, which later on became the signature of Manohar Shyam Joshi’s fiction. Needless to say, there is nothing didactic here. Instead, there is a kind of invitation to at least momentarily visit the dark corridors of one’s psyche.

The locale of this tale is a colony of middle level government employees in New Delhi and the period that of the mid-sixties of the last century. You can smell the ‘sweet’ (or bitter, if you please) decadence almost in every sentence.

Just like Joshi’s later masterpiece Kuru Kuru Swaha, this text also has a ‘Rashomon’ dimension in the narration. The ‘child-woman’ about whom all the males are speaking, does not directly come across. You ‘know’ her only through the reports about her, and each ‘reporter’ is a male. In other words, this ‘woman’ does not even exist on her own. What you come across is a set of independent, yet interconnected descriptions of her and her parents. She is what she is ‘imagined’ to be and reported by her self-proclaimed, successful or unsuccessful ‘yaars’ in illicit relationship with her. Are these claims and descriptions actual or just imaginary? You never find out—at least not in the text as it is for now.

This Rashomon device apart from adding an ironical dimension of ‘to believe or not to believe’ to each narration, also becomes a metaphor for the fact that not only in ‘illicit’, but even in the supposedly licit man-woman relationship the male ego insists on fitting a real human being, an individual, a woman into given stereotypes imagined and perpetrated over the centuries of patriarchy and internalized as ‘natural’ by most of the males.

One only wishes that Manohar Shyam Joshi had been granted some more years of life; or would have given this particular text priority over his other engagements; as even in its present, very rudimentary form, it indeed reads like a blue-print of ‘the great Indian novel’.

Purushottam Agrawal is a scholar of bhakti, a literary critic, fiction writer. His maiden novel is Nacohus (Hindi, 2016). His latest work is Padmavat: An Epic Love Story (English, 2018).