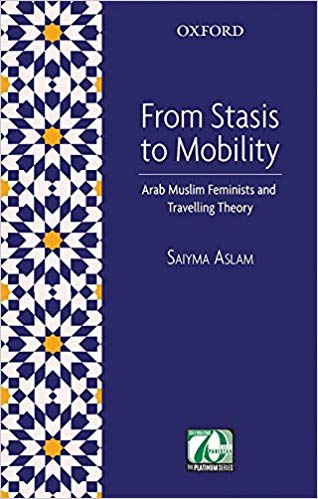 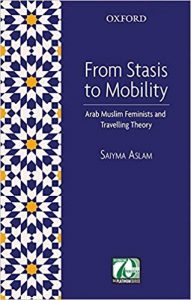 Aslam’s book is an exploration of how the lives of Arab Muslim women are influenced by culture, law, religion, patriarchy, contingencies of global restructuring and its accompanying socio- economic shifts. She employs feminism and travelling theory to challenge the
(re)Orientalist myths about Arab women’s supposedly exotic lives as well as indigenous structures of patriarchal domination. She argues that the lives of Arab women are marked by heterogeneity, and that any discourse about them has to take into account the forces of globalization that are altering the configurations of household, state, politics, civil society and economy. Aslam asserts that to portray them as passive victims of the patriarchy of Arab men is fallacious as is the attempt to impose anachronistic ideologies and cultural norms upon them in a world that has moved far ahead and in which Arab women play diverse roles. The main focus of the book is upon facilitating a shift from stasis to mobility for Arab women, and all that it would involve.

Divided into five chapters, chapter one argues that the Arab Muslim woman is a semiotic subject, produced according to the law of supply and demand to serve various political and ideological ends. She deftly explores how colonialism projected Muslim women as oppressed and passive victims that needed saving, while indigenous discourses saw them as repositories of honour and identity in the face of colonial onslaught, and later in the nationalist, postcolonial discourse as symbols of modernity and progress. What was common to all these was that women continued to be pawns in a discourse conducted by men and for men. Women’s concerns continued to be sidelined and feminism viewed with suspicion.

Aslam applies Said’s concept of travelling theory to feminism. She highlights how feminism has evolved from being essentialist to developing a more nuanced understanding of intersectionality and the importance of context. In the Muslim world feminist concerns emerged and evolved to yield complex positions and Aslam argues that these should not be forcibly fitted into the religious-secular binary, because the reality is far more complicated. The rest of the chapter explores the various terms that are central to Aslam’s argument. She distinguishes between various feminist positions, defines stasis as a condition where there is no change or development and which relegates women to domestic obscurity, limiting their potential to travel and explore opportunities; characterizes mobility as freedom to move or change one’s social status, and discusses the meanings of fundamentalism and Ijtihad.

In the second chapter Aslam explores the factors limiting women’s mobility and confining them to a state of stasis. She explores the institution of the family, the public-private divide and the educational and economic disparities as factors that contribute to stasis. In the subsequent chapter the author highlights the ways in which women’s lives are not hermetically sealed boxes, impervious to external influences, but how the impact of economic, cultural, social and technological aspects of globalization have an impact upon women, even if they are confined to their homes.

Aslam explores in detail in the penultimate chapter the works of Mernissi and El Saadawi, their articulation of liberal, socialist and radical feminist ideas, how these ideas are received, resisted and adapted to context, the contribution of these authors to development of an indigenous Arab feminism and their emphasis on the need for travel of ideas.

In the concluding chapter Aslam brings together the various arguments developed throughout the book and distils them into two major assertions. First, the treatment of women in Muslim societies is neither according to the egalitarian principles of Islam, nor in keeping with rational principles. Aslam furthers the well established but hotly disputed argument that Islam gave rights to women at the very outset, but cultural patriarchy violated them, rendering women vulnerable to men’s cultural superiority. Feminists have argued that the root of the problem is that religion, customs and culture are presented to women as an indivisible whole and there is no willingness to engage with women’s concerns in light of the rational demands of the time. The author claims that reviving the spirit of Ijtihad is crucial to resolve Muslim women’s problems in transformed circumstances.

The second major assertion is that men and women are both victims of certain structural problems, even if these problems have a differential impact upon them. Aslam highlights the inconsistency between the traditional roles of men and women on the one hand, and the compulsions of modern living in the era of globalization and rampant consumerism on the other. Men are performing their traditional roles of breadwinner and provider under increasingly difficult economic circumstances. Women’s entry into the workforce is construed as a challenge to their ability to fulfil this role, especially when women are the sole breadwinners.

The demands of domesticity, modesty and honour traditionally expected of women are considered fulfilled only if their movement outside the house is curtailed. When economic compulsions propel women into a hostile public space they face severe and multiple challenges. Education and economic participation cannot be equated with real emancipation. In addition, women are targets of the frustrations of the male populace that sees women as competing with them for scarce jobs.

Men’s anger is misdirected at women; instead of questioning the state and its policies, they attempt to restrict women’s mobility and opportunities by enforcing anachronistic traditional norms. The lack of democratic structures combined with absence of national autonomy have created a situation where despite being resource rich, these societies have failed to address the socio-economic problems facing them. Beset by difficult circumstances and in the absence of democratic institutions and procedures, there is little scope for men to protest against the state and far easier to vent their frustrations upon those over whom they wield power, namely women. Aslam argues that men and women share powerlessness, albeit in different ways. It is essential therefore that male and female problems are seen as related and stemming from the same oppressive mechanisms that require a common struggle for a future where they share the fruits of liberation.

Aslam concludes that re-evaluating the status and role of Muslim women is a survival issue, not just for women but society as a whole. Indigenous feminism has a crucial role to play in countering the stigma of western agenda attached to feminism. This can only be done by painstaking feminist activities and feminist studies. The author suggests various feminist projects that are crucial for this. Most importantly, it is necessary to highlight how ideas, influences and theories from the West have always encountered resistance and undergone adaptation and modification according to local challenges, and feminism is no exception.

The strength of Aslam’s work lies in the meticulous detail with which she has built up her argument and the nuanced exploration of some of the terms that are commonly bandied about without deeper interrogation of their possible meanings. She has also challenged the idea of patriarchy as a singular form of oppression, unconnected with other forms of social control that impact not just women but also men.

There are however significant problems both with how she defines the problem as well as the solutions she offers. The works of Mernissi and El Saadawi are central to Aslam’s exploration, but her engagement with these authors is uncritical. She has focussed on how they have defined the problems that beset Arab women and the solutions for them. Aslam has accepted their word at face value, without reference to how these two authors have also been challenged from other feminist positions.

For example, both Mernissi and El Saadawi are critical of veiling which they characterize as an unrelievedly misogynistic practice with a singular oppressive meaning. Mernissi has argued that veiling is a practical manifestation of the idea of exclusion. The veil is the device to render invisible in the public sphere, that which had no business to be there in the first place. Nawal El Saadawi has also made similar arguments. The veiled woman is seen as the woman who is also subjected to seclusion and has no mobility and agency. Mernissi also argues that the veil has been used by beleaguered states to deal with economic crises, by sending ‘women back to the kitchen’ (p.144).

This argument is seriously flawed on two counts. Islam enjoins both men and women to lower their gaze and be careful of their behaviour in interaction with unrelated members of the opposite sex. If women’s presence was considered illegitimate in the public sphere, then, instead of injunctions regarding the regulation of behaviour and apparel there would be a blanket ban on any interaction between men and women. The veil does not signify that women have no role outside the domesticity of their homes, it is a religious practice required of women when they occupy public spaces. Fadwa El Guindi has written of ‘desexualisation of public spaces’ to facilitate neutral interaction between people in the public space and how sexuality is relegated to the realm of the private.[1]

The second problem that the conflation of veiling and seclusion presents is evident at the level of practice. For many women, the veil has served as the means of escaping seclusion and gaining access to the public spaces. El Guindi has documented how many of the veiled women students at the University of Cairo are from families where they are the first generation of women to pursue co-educational university education. The wearing of the veil has enabled many women to overcome the traditional barriers that gender roles had erected.

In the fourth chapter Aslam has discussed in detail the liberal, socialist and radical feminist tendencies present in the works of Mernissi and El Saadawi, and how they have adapted them to local conditions. This ‘discovery’ of mutually irreconcilable ideological positions within the same text is too simplistic, given that liberal feminism on the one hand, and radical and socialist feminisms on the other, share very little common ground as they are based on fundamentally different ontological and epistemological assumptions and understandings of human nature.

Finally, Aslam does not challenge Mernissi and El Saadawi’s contention that women’s mobility could be secured by highlighting how men and women are subject to the same oppressive socio-economic and political forces, and both are victims of powerlessness in different ways. While this is a valuable insight, it does not necessarily lead to a situation where men would be willing to give up entrenched privileges. Greater socio-economic opportunities for both men and women may well result in women having access to better job opportunities, but it does not entail that patriarchal privilege will wither away. This linking of patriarchal oppression to terrible socio-economic conditions alone is a reductive understanding. Women having access to economic opportunities in the West has not saved them from a continuous assault on their feminist rights. Patriarchy has an independent logic that cannot be subsumed under economic distress alone. While women may share some predicaments with men, there are certain feminist struggles that are theirs alone.

Ambar Ahmad teaches in the Department of Political Science, Kamala Nehru College, University of Delhi. Her areas of interest include political theory, religion, feminist politics, especially the intersection of religion and politics.