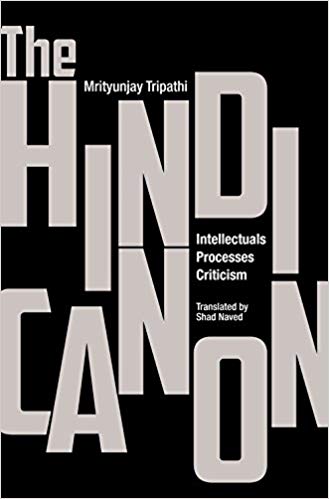 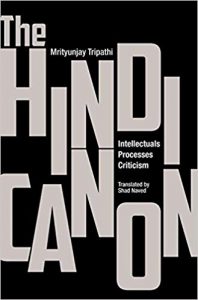 All living literary traditions have not only a present and a future which are yet fully to unfold but equally so a past. A literature which does not continually interrogate, revise and reinscribe its past palimpsestically may not have much of a future to look forward to, for in literature the past never really passes away. It continues to inform, infiltrate and shape the present in all kinds of explicit and implicit ways, and is ever a site of vital contestation. ‘Who we were, what we are, and what we may now become’ (Ham kaun thay, kya ho gaye hain, aur kya honge abhi, as the poet Maithili Sharan Gupt put it in 1914 in his widely popular poem Bharat-Bharati) all remain issues to be debated within the same seamless time-frame and with the same urgency.

These are precisely the issues sought to be addressed in the book under review, The Hindi Canon, published in 2015 in Hindi under the title, Hindi Alochana Mein Canon-nirmaan ki Prakriya (The process of canon-formation in Hindi criticism). The work began as a Ph.D. dissertation at the University of Allahabad, and the author recalls with a sense of epiphany the moment that inspired it. It was a lecture delivered at that university by Namvar Singh in 1999, in which he introduced the English word ‘canon’ and said:

The history of Hindi literature constitutes a ‘canon’. From Tulsi to Nirala and Muktibodh, a canon has taken shape. The paradox of the ‘canon’ is that it belongs at the same time to the past and is absolutely contemporary (cited on p. 1).

Over the last 50 years or more, the obiter dicta of that charismatic literary historian and critic ‘Namvar-ji’ (as he is universally called) has launched a thousand critical ships, and this was to be one more of them—except that it seems to have begun floundering no sooner than set afloat. Glamoured and stimulated by the English word which he assiduously looked up in bilingual English-Hindi dictionaries, the young researcher Mrityunjay Tripathi set out to explore ‘canon’-formation in Hindi and quickly found that neither the culturally and religiously loaded western word nor the concept has had any currency or relevance in Hindi, which has gone about sorting out its tradition in a quite ‘unselfconscious’ (p. 5) and uninfluenced manner. Tripathi soon arrived at the finding that ‘the problem of the word “canon” in Hindi signifies an impossibility,’ and decided that he must use this entirely unassimilated term within scare quotes (‘canon’) and untranslated if he is to use it at all.

This candid confession raises another set of issues which are here left unaddressed. If the conceptual cap of this term does not fit Hindi, why insist on wearing it? The solution found here is that the term ‘canon’ virtually disappears as the book proceeds and no more than lip-service is paid to it here and there. That would have been fine if the hobbled Hindi book was allowed to lie like a sleeping dog, but it is now aroused by the translator and the new publisher to bark and bite again, this time in English. However, the term ‘canon’ that sounded like a beguiling novum when used in Hindi seems in English to be old hat. It turns out that it is not only creative writing that is notoriously difficult to translate but discursive prose seems to have its pitfalls too, of equally culture-specific terms and semantic incommensurability. To translate ‘canon’ from Hindi back into English is thus to carry coals to Newcastle or, as we say in Hindi, to make the Ganga flow upstream.

Beyond this terminological inexactitude (to borrow a euphemism coined by Churchill), there remains to consider the substance of this notably erudite and wide-ranging volume. In its five chronologically arranged chapters, Tripathi surveys the various narratives of the history of Hindi literature as constructed at first by colonial British investigators and subsequently by indigenous Hindi scholars of various ideological hues, to each of whom he accords long or short shrift: the colonials (pp. 13-35), the nationalists (pp. 36-92), the Marxists (pp. 93-140), the counter-Marxists (pp. 140-58) and finally the champions of feminist and Dalit ‘identity’ (pp. 158-71).

It is as rich fare as any English-language reader may wish to feast on, before he cries ‘enough!’ The scores of Hindi critics who form this bustling parade are all allowed to speak in their own voice and a large proportion of the book comprises quotations from them, a compendium which Tripathi seems for the most part content just to curate rather than critically analyse. The Hindi reader would have known what weight to assign to each of these critics but in English translation, they all start from scratch which may be a mixed blessing. Some of these new readers may have heard of Namvar Singh, Manager Pandey and Nirmal Verma, but do Pranay Krishna and Ashutosh Kumar, who too are cited copiously here, ring any bells even within the Hindi sphere?

As for the revaluation of major Hindi writers by successive literary historians, the prime exhibit here is predictably Kabir. It is noted that the Mishra brothers did not rate him in their top Nine Gems of Hindi poetry and that he was included but underrated by Ramchandra Shukla, until Hazari Prasad Dwivedi rescued and restored him to his rightful place. Kabir has now been claimed for the Dalits by Dharmavir who denounces Shukla and Dwivedi equally for being Brahminical. It is left to Manager Pandey to point out that if no Ram-worshipping shudra poet emerged in the Bhakti period, no major shudra poet has emerged in our modern progressive times either (cited on p. 116). Purushottam Agrawal, who published a major book on Kabir in 2009, is not even mentioned here, which may not be a bad fate, for Vijaydev Narayan Sahi, who as a poet sought to emulate Kabir, was a Lohiaite socialist activist, and offered a fine new interpretation of Jayasi’s Padamavat, is dismissed here anyhow, apparently for writing an article titled ‘Marxist Criticism and its Communist Consummation’. One is reminded of a similar article by Manto titled ‘Progressive Persons Never Think’ (p. 149).

This may be the first work of Hindi literary criticism to be translated into English, and one may well wonder why. Should not the much-celebrated Akademi-award winning work on radical alternative historiography by Namvar Singh, Doosri Parampara ki Khoj (In Search of the Other Tradition) have had this distinction, especially as it has already been translated into English (by Akhilesh Kumar of Delhi University as part of his Ph.D. dissertation) but awaits a publisher? Or should not that foundational and still indispensable opus, Hindi Sahitya ka Itihaas (1929; rev. 1940) by Ramchandra Shukla have been deployed to lay the basis of an understanding of Hindi literature in English as it has done in Hindi for ninety years; it is even now ‘truly…the canon of canons’, in an assessment cited here without demur (p. 6)?

But both creative and critical works are chosen to be translated into other languages for all kinds of reasons and then tend to acquire a mass and a canonical authority of their own, especially among secondary and second-hand scholars who have little access to the original language. This book insists that only those valuations of Hindi authors are valid which are based squarely on Marxist analysis, though this leads to a paradoxical denouement. For Namvar Singh, the outstanding Marxist critic in Hindi who was Tripathi’s god on the opening page of this book, is later devalued and discarded by him. The poet Gajanan Madhav Muktibodh, whom Namvar himself had boldly championed and accorded a place of honour in the Hindi canon in the 1960s, is now adjudged to have had a more ‘correct’ Marxist ideology, by making ‘class his primary category of analysis’ (p. 130). It is this ‘class position’ that is here held up to be the singular and supreme yardstick of all literature. This canonical assertion has at least one undisputed merit, that it would surely make that other canon, comprising all the Catholic saints so sanctified by the Pope, turn and twist in their holy graves.

Speaking of saints, this work could with profit have devoted some space to considering two older instances of canon-formation in Hindi. Both are biographical accounts of the saint poets who constituted much of the corpus of the poetry of the Bhakti period in Hindi. These are titled Chaurasi Vaishnavan ki Vartta and Do Sau Baavan Vaishnavan ki Vartta, i.e., narratives of eighty-four Vaishnava saints in the first case and of two hundred and fifty-two (i.e., three times as many) saints in the second case. Both were composed in the latter half of the 17th century, i.e., towards the end of the Bhakti period, and remain our chief—and often only—source of information about the early Krishna-worshipping poets including Surdas, Nandadas and Raskhan. In these works, the two meanings of the term canon are fused together, for the literary canon overlaps extensively with the religious canon as perhaps in the literature of no European language.

Another useful source to discuss here would have been the process of canon-formation in Hindi’s sister language Urdu. Mir Taqi ‘Mir’ (1723-1810), a poet whom some readers regard as the equal of Ghalib, not only composed a tazkira (a bio-critical account) of a large number of Urdu poets (though he wrote it in Persian) but also fraudulently emended at least one manuscript of an earlier tazkira written by a preceding poet so as to substantially enhance the lukewarm praise he had offered Mir! Even more to the purpose here would have been the first instance of modern canon-formation in Urdu in the book Ab-e hayat (1880) by Mohammad Husain ‘Azad’, which has been translated into English by Frances Pritchett as Ab-e hayat: Shaping the Canon of Urdu Poetry (2001), with a substantial introduction by Shamsur Rahman Faruqi titled ‘Constructing a Literary Theory, a Canon, and a Theory of Poetry’. As in so many other respects, a comparison between Hindi and Urdu here would have been mutually illuminating.