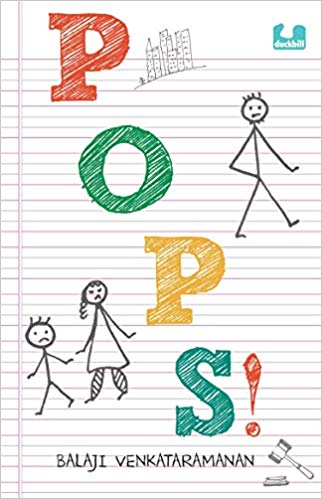 By Balaji Venkataramanan. Illustrations by Twiggy 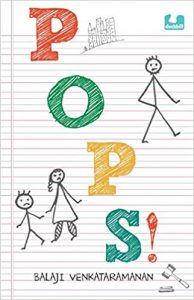 Unlike your other classmates, you have an incomplete family because your Dad is just not there. You only know him as a face in the photographs in your mother’s wedding album. For some unexplained reason, he doesn’t like you and your mother and left soon after you were born. You begin to feel that you must have committed a sin to be punished. Worse, you have to lie to everyone that your father lives in America.

Seven-year-old Arun is growing up full of hatred for the father who abandoned him in this cavalier fashion. Then, one day, this father reappears unexpectedly and tries to forge a bond with him. Naturally, Arun is bewildered and resentful and refuses when The Man wants to be called ‘Dad’ or ‘Pops’. The monthly meetings ruled by the court create a lot of turmoil for him. However, little by little he recognizes that his father is trying hard to win him over. And some empty spaces in his life begin to fill up.

Pops! is the heart-warming account of one very significant year in young Arun’s life. It is narrated in first person, which provides the reader with a realistic depiction of a seven-year old’s emotions and his responses to an extremely challenging situation. Arun’s everyday life—home, school, holidays and the hopes and aspirations of a child his age are presented with empathy and humour as a backdrop for the dilemma, which is skillfully woven into this routine. Torn between what his elders tell him at home, and his visceral response to the strange, bearded daredevil of a father, Arun slowly learns how to negotiate the complicated world of grown ups.

The poignant situation of an abandoned child is feelingly sketched. When the father who has so far been an unknown quantity decides to re-enter his son’s life Arun’s fear is palpable in these lines: ‘And there he was. The Man. Standing right above me. I stood like a deer in front of a tiger in the Discovery Channel video.’

Arun had felt the lack of a father keenly, but accepting The Man is tough and this is what makes this book true to life. Broken families may have become more common in our country but divorce and separation are still thorny topics to deal with in children’s books. By letting Arun tell his own story, in his own language, the author brings Arun’s predicament very close to us.

The ending arrives somewhat abruptly but Arun’s problem has been effectively resolved. He need not bluff any longer when he has to write about his father in class. Everything is still not perfect, but there is more veracity in his existence. He does not have to make up stories about his missing father and has learned to love Pops.

There is, however, one jarring note. While the other characters appeal in their own situations, it is hard to build up empathy with a father who expresses no regret for his desertion and uses inducements to win his child’s love. True, he has very little time to make an impression, but enticing his son with an iPad or the gift of an expensive bicycle which the mother has been trying to make Arun earn by doing well in his exams, feels like his values are somewhat askew. First, he abandons his family and then he thinks material goods will make things right. Again, when the mother sensitively decides to spare Arun the ugly scenes at the Family Court, the father chooses to meet him in the commercial spaces of the mall, rather than the park as suggested by the grandfather. Arun may prefer it, but it is another place where his father has scope to buy his love.

All said, however, the book is a good read. The cover design is very attractive too and the small sketches in the corners of each page tie in beautifully with the narrative.

Deepa Agarwal is a writer of books for children and adults. A poet as well, she likes to retell ancient Indian Folktales, legends and myths.