Fiction With A Garnish Of History 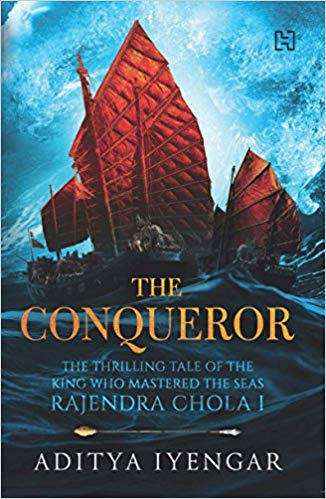 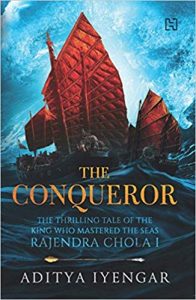 At the end of the book, Iyengar singles out one person from among the publishing staff for special thanks for having encouraged him to switch from ‘myth-fiction’ to historical fiction. All those who read this novel and are familiar with Iyengar’s earlier work will want to do that after reading this book. Without going into details, this switch has made the book easier to read, less laboured than his earlier work. There may be, and very likely are, many reasons for this but the one that’s most obvious is his ease with the language.

Aditya Iyengar is one of the most skilful writers of English I have come across. One can be unkind and say that it is because his peers excel in clunky, ponderous English with clichés in virtually every line, but doesn’t have to say it, because his skill with the language stands out even without comparisons. It is easy, interestingly put together by someone who knows what he is doing. The result is that this book is an easy, interesting read, and one you don’t feel like putting down, not because of its plot or its characters but because it reads so well.

Having said that, though, one has to add that, as one reads it, what becomes distressingly clear is that there is no structure to the book. The author probably thinks he has been very clever in shifting the narrative between the account dictated by the imprisoned King Sangram Vijayatunggavarman of the kingdom of Srivijaya to a scribe (being convinced he is to be executed the next morning) and the account of what happens to his queen and daughter after the destruction of his city by the navy and armed forces of the Cholas from the kingdom of Chola Nadu in the great landmass then called Jambudwipa or, by some as Bharatvarsha.

But, having begun the novel well, with the terrible attack by the Prince Virajendra Chola on the Srivijaya capital, destroying it and capturing the King, the story begins to meander. It is set, as the reader will have realized by now in the time when the Chola Empire was at the peak, or just past its greatest period, during the reign of Emperor Rajaraja Chola, who built, among other things, the colossal Brihadeeswara temple in Thanjavur, to which his son Rajendra Chola was giving the finishing touches at the time of this novel’s events. The title The Conqueror refers, presumably, to Rajendra Chola, or Rajendra Chola the1st, to be more correct.

The intriguing thing is that the King does nothing in the novel; he is building the city called Gangaikondacholapuram, but apart from philosophizing with the imprisoned King Sangram, he doesn’t do anything. His sons do it all for him.

To clarify: the novel opens with a savage battle in which King Sangram’s city is destroyed by the much more disciplined naval and land forces of the Cholas under Prince Virajendra Chola. The king is taken prisoner and transported to Gangaikondacholapuram, the city Emperor Rajendra Chola is building. On the way he witnesses the ease with which Prince Virajendra Chola destroys the Srivijaya port of Kadaram, and the great, bustling port city of the Cholas, Poompuhar. In the city he is surprised to find that he is treated as a king, with a stately mansion, attendants, personal servant and all the comforts he could want, be it women or alcohol. He begins to receive, on occasion, an initially mysterious visitor late in the night, who turns out to be none other than Rajendra Chola the Emperor. First questionings give way to discussions on different subjects, and even to the Emperor asking King Sangram his opinion on which of his three sons should succeed him: his eldest, Rajadhiraj, his second, also called Rajendra referred to in later chronicles as Rajendra II, or the youngest, Virajendra.

Meanwhile, Sangram’s queen and daughter, who had been left behind flee from the city accompanied by a small guard under the command of a veteran warrior, Pavitran. What happens to them constitute the events in the novel, and very little of consequence happens to Sangram after he is housed in the palatial mansion given to him. He does try to escape, and also joins a plot to murder Rajendra Chola during one of his visits to Sangram, for which he is put in a cell to await trial and inevitable execution, during which he dictates his tale to the scribe for whom he had presumably asked.

This device used by the author is clever at a number of levels: it provides a foil to the narrative of what happens to the queen and her daughter, and it gives the author the freedom to use his imagination, and such sources as he has consulted to present a vivid picture of the city and all that Sangram witnesses.

Iyengar is particularly good with his descriptions of battles: he demonstrated this in his earlier book A Broken Sun*[1], and he does it here. The destruction of Sangram’s capital, whose name Sangram refuses to disclose, the naval battle which destroys the Srivijayan navy at Kadaram, and the fierce encounter between Chola forces under Rajadhiraja Chola and the Chalukyas are vividly described, with a great deal of detail that gives them a life they would not otherwise have.

Despite the lack of structure that makes Sangram’s first person account border on the boring, while the story of the queen and her daughter, crowded with events, is restricted by an unwanted and sometimes exasperating brevity, on the whole, this is a book that makes good reading, owing mainly to Iyengar’s skilful use of English to retain the reader’s interest. Buying it is a worthwhile investment.

Bhaskar Ghose, a member of the Indian Administrative Service (retired), is the author of Teller of Tales and Parricide.