From Bureaucrat To Politician 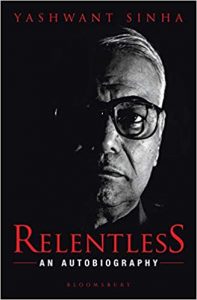 From bureaucrat to politician, and from one century to the next, Yashwant Sinha’s is a journey from modest beginnings to the highest corridors of power. In Relentless, he has presented his life and career in a memorable and somewhat lengthy memoir of over 500 pages. But then, he has so much to say. With a Prologue and an Epilogue, the book is divided into eight parts spread over 40 chapters. Part I, ‘Roots’, is followed by Parts II and III, ‘The IAS Years’, Part IV, ‘New beginnings: Life after the IAS’, Part V, ‘The BJP’, Part VI, ‘Beyond Borders: The MEA Years’, Part VII, ‘To the State and Back’, and finally Part VIII, ‘Postscript’. Sinha recounts his modest beginnings, his parents and his siblings. He also recalls his friendship and strong attraction for Meenakshi who later married Sujit Mukherji, a senior executive in a major publication house. Later, he married and has had a happy life with Nilima and their three children. He is frank and honest about matters like his affliction with cancer (which he, fortunately, has got over) and his love-hate relationship with Ramaswami Mani, a batchmate, who later went to UNO and died prematurely.

Yashwant Sinha joined the Indian Administrative Service in 1960 and served for twenty-four years in the Bihar cadre and at the Centre, with postings abroad in between. Parts II and III are about his career as a civil servant, his posting in the sub-division, as District Collector in Dumka, his years in the Ministry of Shipping and Transport apart from his sojourn as First Secretary (Commercial) at Bonn and later as Consul General in Frankfurt. Sinha then recounts his days back in India and Bihar where he served as Principal Secretary to Karpoori Thakur, the then Chief Minister.

After leaving the service in 1984, he joined Chandra Shekhar and later Atal Bihari Vajpayee and developed a deep bond with both, as he did with many world leaders with whom he struck one-to-one equations. A special mention has been made of Colin Powell, the US Secretary of State.  Expressing utter dislike for China he admits to ‘“Dislike”, even intense dislike, because of the way it has evolved into a bully today, and the way its rise is threatening its smaller neighbours and the rest of the world.  I have never liked bullies in my personal life and, therefore, do not like them on the international relations stage either. A point of reference is China’s summoning Nirupama Rao, our Ambassador in Beijing, at an unearthly hour of three in the morning once.’ In a similar vein, he says, ‘What I learnt from this experience (Pokhran-II Nuclear Blast) is that you must be strong to command respect. The weak are generally ignored, if not ill-treated.’

What is remarkable about the autobiography is the frankness with which he has narrated various aspects and experiences during his long career. He does not feel shy about mentioning that Nilima would sometimes even wipe the floor when they were in difficult circumstances. He is brutally frank about his assessment of the social and political values and the behaviour of politicians. ‘In an uncanny way, all these problems continue to bedevil our polity. Perhaps our politicians have a vested interest in keeping them alive for their electoral gains. After all, politics thrives on exploiting the societal divides rather than eliminating them. Casteism, communalism, regionalism and language are still potent instruments in the hands of politicians, to be leveraged as and when deemed fit.’

Also, ‘This episode (Congress withdrawing support to Chandra Shekhar) taught me two very important lessons. The first was that in India, the economy is never central. Politics is. Always.  Our politicians and leaders do not care about economics, the fiscal health or the future of the country. For them politics itself is of supreme importance; it is political expediency that tends to dominate the discourse and nothing else. We narrowly escaped the economic crisis of 1991; the next time around, we might not be so lucky. The second was about trusting the Congress party. Should Chandra Shekhar have put his faith in the Congress in the first place? The Congress had been responsible for the split in the Janata Party in 1979, given its encouragement to Choudhary Charan Singh to break away and form a government with Congress.’

‘Despite serving in the IAS, I must admit that on many occasions I have failed to carry conviction with the administration and persuade it to do things that were in the public interest. Even as a minister in the central government I have had the same experience. Things become even more difficult if the state government belongs to another political party or formation, or if the chief minister belonging to your own party is not well-disposed toward you.’

Sinha says, ‘In public life, people often approach MPs or MLAs for assistance to get their work done and I was no exception.  Karpoori Thakur’s son had requested me to get his child admitted to a medical college in Jharkhand under the Chief Minister’s quota.  I had written to Arjun Munda to help in the matter. Similarly, the owner of the garage where I used to get my cars repaired, who was dying of cancer, had approached me to get his brother-in-law posted as a deputy superintendent of jail in Dhanbad. I had written a letter to the CM in this matter.  There were a couple of other letters that I had written to him as well, with similar small requests.  So, I was shocked when a Hindi weekly magazine carried this story prominently, with copies of my letters, insinuating that I was doing this to make money.’

Sinha is nothing if not candid when he says that his ‘declining role in party affairs at the central level naturally had an impact on my standing in the party in Jharkhand. I feel that there are a few traits in my character that make me rather unfit for the present day and age. I remember mentioning this to Advani in a heart-to-heart talk with him after the Jinnah episode.’

However, it is also a fact that, as Sinha recounts, at their request ‘Narendra Modi found the time to come to Hazaribagh and address a mammoth meeting, two days before the election (2014).  It was the hammer blow we wanted to inflict on our opponents, without leaving time for them to repair the damage done.  Modi’s meeting and his speech turned the wave completely in our favour. Jayant won by a margin of 1,59,128 votes, getting a total of 4,06,931 in his favour. He had secured the largest number of votes ever by any candidate in the history of Hazaribagh.’

In conclusion, perhaps it would be appropriate to quote what is Sinha’s self-assessment of his own character. As he told Advani, ‘When I feel that someone, however close or friendly to me earlier, now wishes to maintain a distance from me for whatever reason, right or wrong, I start drifting away from that person myself, so that he is not embarrassed.  I would never like to give the impression that I am a burden he has to carry willy-nilly.  At every stage of my life, I have drifted away from the people closest to me because I thought that they no longer wanted to be close to me.’

And Yashwant Sinha continues to wage his own lone battle according to his light, as his page-turner of an autobiography shows.