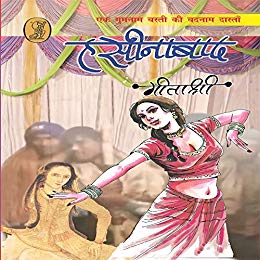 Gitashri’s novel Hasinabad covers a long socio-political span from the 1960s to the first decade of the new millennium—a journey from ‘Hasinabad’ to ‘Hussainabad’. While the writer has a firm grip on the representation of Hasinabad, a colony of concubines set up by the zamindars of Bihar, she loses that hold when the place gets transformed to Hussainabad, under pressure of democracy finally making inroads into the interiors.

Hasinabad is a hidden alley, a black hole from where none of its resident women can escape; it is a place of expressionless eyes, a place full of body-odour as the writer puts it, a place of that dark truth which is covered with ignominy, not even lies. Daughters of mistresses become mistresses, sons become strongmen for the zamindars. It is not a general ‘red light district’ of the city where some possibility of chaos or escape exists; it is a citadel of dark lust where lives rust and where status quo is a must—an old trick of the ruling elite. The writer says, ‘The “hasinas”of Hasinabad suffered under the yoke of their immeasurable pain. The “hasinas” remained “hasin” only for a brief while, and then got transformed into ruins and rubble’ (p. 33; translation mine).

Sundari is abducted from a field while still a teenager, and lands up in Hasinabad, on the bed of Thakur Sajawal Singh. With her beauty, she is able to wield some power over him; he is unable to abandon her even after the birth of two children, a girl and a boy. He ‘keeps’ her well-fed and in luxury; however, she is anxious about her daughter’s future—that she too would land up on a thakur’s bed as a ‘keep’. There is no room to run; if she gets caught, she would probably be hung on the village square. However, as Leonard Cohen puts it, ‘There is a crack in everything, that’s how the light gets in.’ A bhajan-mandali comes to the village, and one of the percussionists espies Sundari. There are many in the group staring at Sundari’s sublime beauty, but she is able to understand those spying eyes—those eyes are her little window of escape. And escape she does, along with her daughter, leaving her son behind. Sagun Mahto, her saviour, is an average looking man, and already married, with children.

Sagun has a tiff with his existing family, and starts living separately with Sundari. Golmi, the daughter, grows up a fiery, feisty girl with a passion for dance inherited from her mother, much to the latter’s chagrin. Golmi grows up in a split world—being called a ‘whore’s daughter’, and dreaming about becoming a great dancer. Eventually, she is able to form her own group, Son Chiraiya Band, which gets work of spreading social messages through music and dance. It is when doing this that she gets noticed by Ram Balak Singh, a politician with socialist leanings, who decides to use her as a cultural force against those who are consolidating votes on caste lines. Golmi gets more recognition, is ultimately fielded as a Lok Sabha candidate, she wins and becomes minister for culture. After this, it is predictably downhill for her, having left her forte of dance, and having entered the murky world of politics.

That, roughly is the plot and frame within which the novel operates. Gitashri’s strength is Realism, or ‘slice of life’ narrative. The struggles of Golmi through her childhood, her mother’s anxiety about dance taking her daughter back to her dark world, the imperturbable hand of fiefdom and its cruelties, the betrayal by two of her childhood friends, the depictions of strong teenage bonds that endure, are evocative and open up a whole chapter of history about feudal dens through the fictional lens. How democracy was or is constantly subverted and appropriated by feudal powers is also wrought well in this novel. As Hasinabad starts getting noticed by the country, the feudal hands let go of it, and enter politics. They have the place renamed as Hussainabad, in an attempt to wipe out their sordid history.

However, this is where the novel starts losing grip over its narrative. It starts veering into the territory of cultural nationalism, and idealism; and the writer is unable to sustain the momentum that hard-hitting Realism has achieved for the novel. The novel also gets morally shy at this point. Two affairs of Golmi are hinted at, one with her older mentor-politician, and another with her childhood friend Khenchru who had tried to molest her as teenager. The second one is just hinted at in passing, and quickly glossed over; while the first one is shown a potential and quickly buried. In the end, it is Adhai Sau, her quiet, sensible, childhood friend who stands by her side like a foil throughout. He is her moral compass, and therefore he must remain a silent, platonic lover while she goes through trial by fire.

The idealism of the novel also downplays the caste equations at play, and ends up reinstating the status quo unwittingly. Golmi’s lover eventually is a young, stoic Dalit man instead of an older, pragmatic politician despite her liking the latter—there is a double status quo here. The narrative voice says that Ram Balak Singh, despite being well meaning, loses the election to casteist forces; and so he ropes in Golmi to make her cultural appeal an unassailable force. Golmi’s identity as a woman escapes from the clutches of Hasinabad but her struggles as a lower caste woman do not come into play. The eleventh Lok Sabha is also thrown in. If one adds up the equations, the narrative voice is clearly siding with the politics of cultural nationalism over identity politics of regional parties. This is where the writer’s politics gets on slippery ground—while she has built a protagonist through caste and class struggle, eventually in the formation of her identity, her mentors are upper caste and they are least resentful of her rise.

Let us stay on the matter of cultural nationalism for a moment. Golmi, in her attempts at rising from a village dancer to the state level, is determined and sure that she will deal only in the folk—she obtains a song book from an elder lady, and rediscovering the pride of the folk becomes Golmi’s mission. Even though she has grown up sneaking into the raunchy dance performances of famous dancers, she never takes that route. In the real world, and in the milieu of Bihar, would it be possible for a musician or dancer to rise without being challenged or appropriated by the pop culture of the day? Instead, she is offered the alternate route of political campaigning, as if that were a nobler route than going pop. This is where the writer goes morally shy again. Sundari is a much freer adult in terms of expression than her daughter, for the former is not the protagonist, but a supporting actor.

Even in terms of plot of the latter half, the novel flounders—the opposition vows to destroy Golmi, but the devices they employ are not gripping enough. Had the writer stuck to the imagination of Realism, the novel would have been much more powerful, instead of being watered down in the second half with half-baked unconvincing idealism. Nonetheless, the novel is eminently readable for its racy narrative, its grip over the idiom of the land it is set in, and for the glimpse of decadent fiefdom that still irks, but the country refuses to let go.

Amit Ranjan has a PhD from JNU, Delhi. His thesis is around the figure of John Lang, a 19th century lawyer, journalist and writer who lived in India, and who was bitterly anti-imperial. His doctoral thesis has received wide acclaim and is going to be published as a book in 2019. Ranjan has also published his debut collection of poems Find Me Leonard Cohen, I’m Almost Thirty in 2018. He has been a recipient of Fulbright,  Endeavour and Inlaks fellowships, and visiting fellow at FIU, Miami and UNSW, Sydney. He is Australia Awards Ambassador, and currently teaches literature at NCERT.