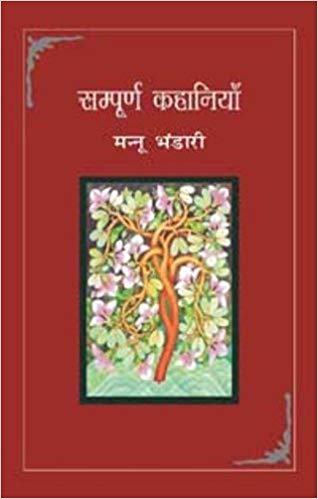 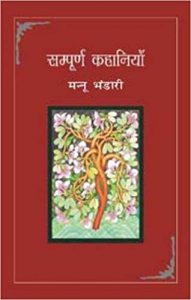 Radhakrishna Prakashan has brought out the second edition (the first edition was published in 2009) of Mannu Bhandari’s Sampurna Upanyas. As the title suggests, the book comprises Bhandari’s limited but highly significant oeuvre of novel writing—Ek Inch Muskan (1963), an experimental novel, written in collaboration with the famous writer and her husband Rajendra Yadav, Apka Bunty (1971), Mahabhoj (1979), and Swami (1982).

Since Bhandari belongs to the older generation of women writers in India, it is possible that many contemporary readers may not be aware of her literary merit and legacy. Thus it becomes all the more important for us to read her novels which are known for their witty, conversational style, and for foregrounding contemporary socio-political, gender issues, including the rights of the minorities and Dalits. I would like to begin this review by briefly introducing Mannu Bhandari and her literary oeuvre. Bhandari was born on 3 April 1931 in Bhanpura, Madhya Pradesh. She did her B.A. and M.A. from Calcutta University and Banaras Hindu University respectively. She taught at Baliganj Shiksha Sadan and Rani Birla College before finally joining Miranda House College in 1964, which is a ‘constituent college’ of the University of Delhi. She also worked in the capacity of the Director of the Premchand Srijanpeeth (Ujjain) after her retirement in 1991. Apart from the novels mentioned above, her major short story collections include Main Haar Gayi (1947), Ek Plate Sailab (1962), Yeh Sach Hai Aur Anya Kahaniyan (1966), Teen Nigahon Ki Ek Tasveer (1969), and Trishanku (1999).

Bhandari, in her novels like Apka Bunty and Swami, interrogates the unambiguous discourse of the patriarchal nation-state that cultivated such gendered contexts post-Independence wherein women felt discouraged to achieve a just and equal position in society. The familial and state ideology, contingent on moral regulations of wifehood and motherhood often restricted women’s attempts at carving out an independent selfhood. For instance, the socio-political and economic policies, which were implemented in post-Independence India firmly ensconced women into the role of mother. They were supposed to be good at running the home and nurturing their children, which would eventually create a better society and better nation out of it.

Aapka Bunty deals with the theme of divorce and how broken families affect the psyche of women and children. The novel also interrogates the sanctimonious facade of Hindu marriage which trains women to believe that their ‘husband is their God and marriage is a sacred and holy union of the husband and wife.’ Shakun is an independent working woman who refuses to subscribe to such warped ideas of marriage. For instance, Mannu Bhandari writes in the preface to Aapka Bunty, ‘Shakun is not self-sacrificial. She will not rout her individuality, enriching her son’s life. Instead she has an independent personality, is financially independent and lives life on her own terms’ (ix). Shakun’s marriage falls apart when Ajay, her husband, gets into an extra-marital affair with Mira.

Swami is also the story of young woman who is caught between her desires as a woman and duties as a wife. Mini fights her way through an arranged marriage system, which expects women and men to submit at the altar of patriarchal, patrilocal, and virilocal structures. The novel, however, reads like an apology for the joint family and arranged marriage system in India which had started to break apart as men and women encountered the radical possibilities offered by love marriage at this point in time. The novel’s conclusion needs to be problematized in the wake of Mini’s submission to God-like husband, who is mature enough to forgive and forget all her mistakes in life. While the novel no doubt sets a model for reformed marriage and domesticity in India, yet, even as it does so, it ends up being an apology for a conservative societal organization which endorses a hierarchical gendered relationship shared between men and women.

Both Shakun (Apka Bunty) and Mini (Swami) are the new women of the newly independent nation-state, negotiating their modernity vis-à-vis the institutional structures of the nation-state. Bhandari captures the status of women as individuals in post-Independence India, which had mainly remained invisible to programme planners and administrators due to the ‘established tendency to view women only through the screen of families or households and not as individuals in their own right’ (Sharma and Sujaya 16). Thus, it is imperative to perceive women not merely as recipients of reform and welfare, but as productive beings who play viable economic roles in society.

Bhandari further exposes the gendered asymmetry of power relations that crystallizes the distinction between femininity and masculinity, constricting the ‘assertion of contrasting, if subordinated, masculinities—whether anti-sexist, or in other ways more gentle or aesthetic ethnic or cultural masculine identities’ (Segal 629). For instance, in Apka Bunty, Bunty’s interest in painting, reading and gardening reflects a very creative and aesthetic facet of his personality. Bhandari provides a glimpse into an alternative approach to masculinities, suggesting how it does not have an inner essence, nor is it static. It is, as Lynne Segal calls ‘a set of fictions’(p. 630), which acquire a palpable quality with a series of investments in it. Bunty is finally left alone when both his parents get married and send him to a boarding school, an institution which acts as what Veena Das calls a ‘surface of absorption’ for familial undesirables.

This theme is taken further in the collaborative novel Ek Inch Muskan. While Rajendra Yadav wrote the portions of the male protagonist Amar, Bhandari worked on chapters dealing with women characters Ranjana and Amala. Inspired by the Nayi Kahani tradition within literature wherein authors plumbed the psychological depths of their characters, recording their reactions and responses to contemporary socio-political contexts, the novel does not lose its narratorial consistency and coherence, even as both writers have worked on it together.

Bhandari and Yadav highlight the role of an artist, and his work of art. Yadav, through the character of Amar raises questions like, is it possible to remain objective as an artist? How can the concept of the egotistical sublime be illustrated in the Indian context? The phrase which was apparently coined by Keats to describe Wordworth’s creative ambiguities carries significance beyond the boundaries of literary genius and productivity. Bhandari and Yadav highlight how the phrase is inflected with gendered, class and caste connotations in the Indian context. Amar’s literary genius cannot be mapped independently of his location as a writer. There is a suggestion in the novel that Amar belongs to a lower caste and class and is an upwardly mobile person who has his own class ethics as a writer. But even as he seems conscious of his class-caste location, he seems to take for granted his privileged gendered location vis-à-vis his wife Ranjana.

Though the novel is an experiment performed by both Mannu Bhandari and Rajendra Yadav, it carries autobiographical references. There are many parallels between this novel and Mannuji’s autobiography titled Ek Kahani Yeh Bhi. For instance the novel, through the wrinkled marital relationship of Amar and Ranjana, raises authorial concerns like how two people can live parallel lives despite staying beneath the same roof. There is a suggestion that the deep connect and collaborative effort Bhandari and Yadav might have shared as writers is missing from their personal domestic lives. Similarly, both Amar and Ranjana might be supportive of each other’s professional ambitions and requirements, they cannot stay together without reducing the other as merely a means of his/her own happiness and satisfying one’s personal ends.

While Ranjana is a self-made middle class woman, Amala is a widow, coming from a privileged and upper caste/class familial context. Both characters are a product of the independent nation state’s tryst with women’s rights in the form of the Hindu Code Bill. While Amala wants to break free and is quite conscious of and yearns for a productive role within and without the confines of domesticity, Ranjana is quite complacent. She has been socialized into subscribing to the codes of domesticity and maintaining a fine balance between her professional and personal life. Amala’s character is interesting because, at least on the face of it, she tries to break free from the limiting boundaries of her class and caste context. The attempt ends up in failure as she is often forced to get back to her comfort zone of privilege, luxury and riches. Her rebellion is manifested in terms of her suicide. The differences between both the women characters represent class and ideological differences with respect to the institutions of the nation state.

Mahabhoj (1979) interrogates the exclusivist and feudalist stance of the newly formed nation as well as national identity, which refused to accommodate the identity of women, Dalits, tribals, and other communities within its ambit. The novel is marked by a sense of collective despair and rage against the insidious collusion of state structures and patriarchal institutions that only served male interests. Bhandari evocatively exposes the self-aggrandizing psyche of contemporary politicians in the form of Da Sahab for whom Gandhian ideals are nothing but a matter of ritual and empty emulation. Alternatively, Binda’s rage represents the rage of the contemporary youth which performed a fundamental role in the socialist and populist movements of the 1970s like the Nav Nirman movement of Gujarat, Naxalite movement in West Bengal, JP Andolan, and so on. The novel seeks to channelize and represent this youth based rebellion against the structural discrimination extended towards the marginalized sections of society. Thus, Bhandari offers a non-Brahmanical/upper-caste, upper-class reconceptualization of the dominant order that leads to a more nuanced and dialectical understanding of societal hierarchies and relations.

Sharma, Kumud, and C. P. Sujaya, eds. Towards Equality: Report of the Committee on the Status of Women in India. New Delhi: Pearson, 2012. Print.

Bharti Arora is an Assistant Professor in the Department of English in Tagore GovernmentArts and Science College, Puducherry.