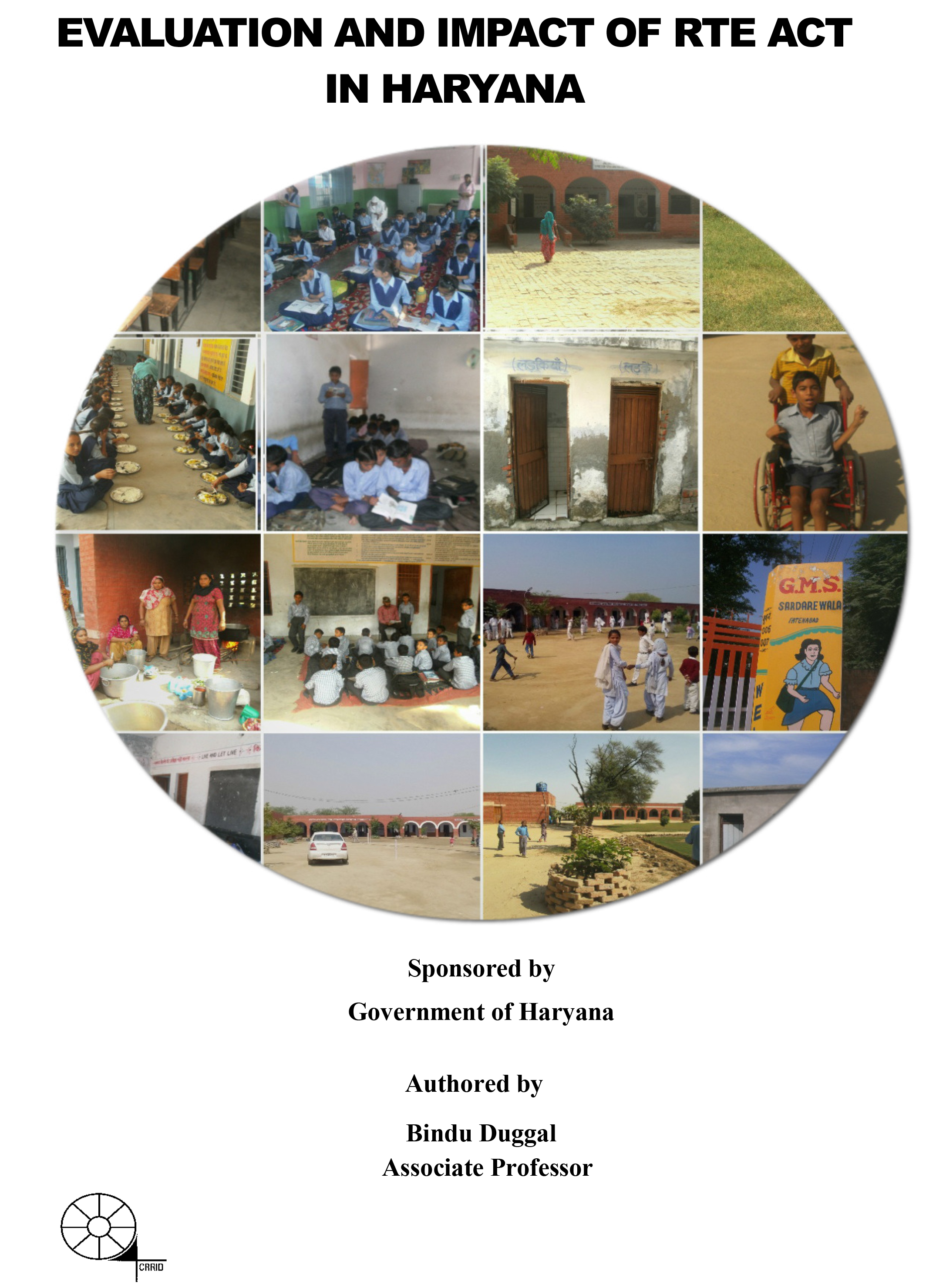 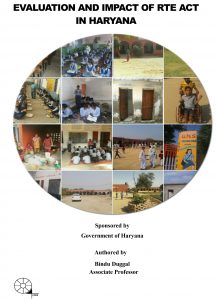 The book as the name suggests is based on a research study aimed at examining the implementation of the Right to Education (RTE) Act, 2009, in the State of Haryana. The study was funded by the Department of Planning, Government of Haryana as has been duly acknowledged by the author. The text of the book gives an extensive description of the study and its findings, on various parameters drawn from the Act. It begins with an introduction to the study and each subsequent chapter gives a detailed description of data drawn from both primary and secondary sources and the corresponding analysis. The book ends with some significant policy recommendations and suggestions, some of which are specific to the context of Haryana, while some have generic appeal.

The author sets the stage in the introduction by providing a historical background of education in India. The constitutional provisions and universalization of elementary education and its need in the post-Independence period are discussed at length. The major recommendations of various education commissions and policies are then described. One wonders why there is adherence to the factual and almost zero emphasis on a critical analysis. In particular I would like to mention that a detailed description of the recommendations of the National Policy on Education (NPE), 1986, without any mention of its critiques, comes across as a celebration of the policy. However, to be fair to her, Duggal does submit that the constitutional provisions till date remain unfulfilled implying a policy implementation failure. It probably would have been more meaningful had she tried to delve into some of the crucial issues more elaborately. The discussion on the rhetoric gap between the provisions and their execution makes a strong framework for mapping progress and identifying further steps in meeting targets and provisions, especially in the contemporary context. The final section on RTE provides a comprehensive understanding of its various features.

Since the study is situated in the State of Haryana, significant statistics pertaining to the State, especially in the context of educational indicators is provided. We are also given an overview of the State in terms of basic parameters in a tabular form, almost like a ready reckoner. The rationale for the study is built up by presenting a comparative analysis of the census data of 1950-51 and 2011-12, on the basis of which claims are made about considerable progress in the educational sector in Haryana in terms of accessibility, literacy rate and increase in the number of educational institutions and enrolment.

In consonance with the objectives, Duggal examines the issue of accessibility by citing data from primary and secondary sources and often correlates to draw valid conclusions. The author highlights the concerted efforts made by the government for compensating for the few unserved habitations in the State. A comprehensive survey with the students including the dropouts, principals, teachers and parents further validates the claims of the government.

Analysing admission for EWS and disadvantaged children, the book provides a summary of eye opening revelations emerging from several discussions, observations and interactions that are well validated by giving multiple perspectives. The parents’ perspectives are given utmost significance. Also, in continuation to this, the issue of integration of admitted EWS children in the regular schools has been dealt with by dedicating a complete chapter to ground realities that exist, based on the opinions of BPL/ EWS category parents and teachers. Likewise, a separate section has been devoted to the inclusion of Children With Special Needs (CWSN). Corroborating the government’s claims with findings from the field, Duggal is able to put together a detailed status of admission of CWSN in government schools and the skewedness that exists in terms of gender as well as the nature of disability. The author concludes that the government needs to make more efforts to make the education system inclusive!
With respect to the status of enrolment in schools, Duggal highlights the preference for private schools over public schools, which is a well-known nation-wide trend now. Citing figures drawn from the year 2018, she presents the caste-wise scenario in schools and makes a strong point regarding increase in skewed ratios in government schools that may have an adverse effect on the social structure. The issues of dropout and out-of-school children have been very sensitively discussed. Apart from deliberating on the given issues of creating awareness amongst the families of those children, the author also presents the perspective of their parents in this regard. To further develop an in-depth and insightful understanding of this issue in the context of the State of Haryana and to establish that ensuring regularity in schools was more important than mere enrolment, she presents the case of the city of Karnal, which makes for a very reflective and analytical approach.

Regarding infrastructural facilities, using various criteria given in the Act, the author presents a detailed analysis on the basis of data from government sources correlated with field survey based on first-hand observations. The comparative analysis between the private and public schools clearly establishes that the private schools had better facilities, which was highlighted in the book earlier too, as one of the reasons for parents’ preference for private schools. The chapter on quality of education is a very comprehensive account of various criteria given in the RTE Act, which range from pupil-teacher ratio to qualifications of teachers and their training, to monitoring of students’ learning.

The book plays an important role in disseminating the intricacies of the research study which in turn re-establish the fact that there always remains a gap between any policy or act and its implementation, RTE being no exception. The onward journey must thus take cognizance of this in charting out future steps and directions.

Yukti Sharma is Assistant Professor in the Department of Education, University of Delhi, Delhi.