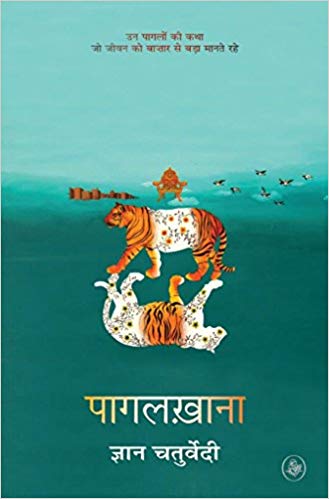 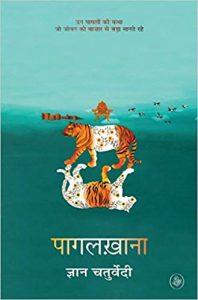 Padma Shri Dr. Gyan Chaturvedi (b. 1952), a noted cardiologist by training and a veteran Hindi satirist, explores the ravages of a world ruled by market culture in his fifth novel Pagalkhana. The novel employs the genre of satirical fantasy and an experimental narrative structure replete with interweaving stories, unnamed character types, and fragments, constructed with an economy of words, images and themes. His previous novels, Narak Yatra (based on the Indian medical system and teaching/training thereof), Baramasi, Marichika, and Hum Na Marab have established his niche in the annals of Hindi literature besides famous satirists like Harishankar Parsai, Sharad Joshi, Shrilal Shukla and the like. Pagalkhana is hardly a cautionary tale holding a window to a future completely overrun, owned and dictated by market forces, where time, personal freedom, dreams, memory, and all rational thoughts per se are systematically sucked out and annihilated, laid down to furthering the nefarious interests of the market.

These times can either be the signs of a golden era, a panacea for all ‘problems’ hindering the ‘progress’ of the human race, or, the epitome of a refashioned Kurtzian ‘Horror’ (Conrad’s The Heart of Darkness) which seeks to subsume ‘life’ as we have known it, of all things innocent, beautiful, and delicate, relinquishing all logic, rationality, and above all, control at the feet of the market forces driven by data, numbers, graphs and cold, stoic analysis. It is the latter that Chaturvedi expertly portrays in the 271 pages of Pagalkhana, where the lines between sanity and insanity seem to be blurred beyond easy recognition.

‘Bazarvaad’, the term Chaturvedi uses effortlessly throughout the novel, has no simple equivalents in English: it can be best understood as a market culture driven by ruthless capitalist and corporate interests, number-driven economic indices, consumerism of the worst order, and the vagaries of evolving globalized tendencies. The novel is prefaced with a long and detailed introduction where Chaturvedi candidly offers several crucial insights into his craft, the actual process of writing the novel, and the theme being explored. He claims to be following the tradition of Shrilal Shukla in investigating why a writer continues to write despite the ‘stressful, difficult and the somewhat long period of isolation’ (p.7) that the writer experiences in the process. Chaturvedi reveals that he worked on six drafts in all for Pagalkhana in a span of two years where the story consumed all his creative energies. He admits that writing this novel has been a unique experience for him, by far the most ‘difficult, challenging, tiring, isolating and forcing him to spend two years in the scariest world (as if in constant darkness)’ than any of his previous works: the topic was difficult, the genre of fantasy hard to rein in, and the necessity to escape flat reportage was looming large.

In the novel, Chaturvedi manages to face the dual challenges head on; in his own words: ‘first, to ensure that one realistic end of the fantasy was always in the reader’s hand, and second, complete control over the narration of the fantasy lest it became too hasty or zig-zag for the reader to lose curiosity and comprehension’ (p.10). The novel is divided into five broad chapters comprising several fragments, with the third chapter containing as many as twenty fragments. The poetic epigraph progresses from describing the complete control of the market/bazaar over life, to explaining how a few unhinged people continued to believe that life was greater than the Bazaar, and that the values of life were greater.

They were called mad.

This is the tale of those madmen.

This is the tale of those mad times.

This is the tale of your time

The first chapter begins by describing the paradoxical nature of the bright darkness spread by the Bazaar, where the world was able to see in the glare of the new light of the Bazaar but in fact, was not able to see anything at all.

The bleak picture of complete market control painted by the subsequent fragments plunges the reader into the heart of the novel: an upscale clinic of a psychiatrist, who is clearly an agent of the Bazaar, complete with luxurious furnishings, a beautiful receptionist and showroom like ambience. The patients are mostly old men, brought in by their wives and sons, and routinely scolded to keep their madness in check. In the next fragment, the description of a people treating a grave natural calamity like flood with frivolity, encouraging water sports and adjusting themselves to the flood by living on rooftops, creating jokes shared virally on facebook and WhatsApp, adds to the bizarre and horrific takeover by the bazaar, in the manner of a silent coup. The next couple of fragments of the chapter build up the complete picture by showing the walkover given by both god and the government to the machinations of the Bazaar. A paranoid old man fears that his son will soon sell him and his wife on OLX, while the middle-aged woman listening to the sordid proposition concurs by lauding the ‘uniqueness’ of the idea, suggesting that perhaps the Bazaar has launched an ‘attractive scheme’ to buy old parents.

The entire novel is built upon the dystopic vision of the Bazaar ruling mankind. In the dystopic, fantasy world of Pagalkhana, the Bazaar becomes all-powerful, ruling over even natural elements like sunshine, making decisions on behalf of everybody, deciding trends like cutting off one’s nose (symbolically losing one’s honour), taking the head off the shoulders (symbolically losing all reason), identical faces of people and absent lines of fate from people’s palms, stench and perfume becoming synonymous, and so on. Chaturvedi’s biting satire and razor-sharp wit is on the mark throughout the novel.

The second chapter identifies several interweaving stories of ‘madmen’ trying to escape the Bazaar due to different grievances: the first seeks freedom from the Bazaar and decides to dig a tunnel through the massive garbage dump behind the glittery Bazaar. Another is distraught that the Bazaar has stolen all his dreams and he is unable to dream at all while asleep; consequently, he remains hysterical throughout, sleepwalking in search of his dreams and injuring himself. A third ‘madman’ is a poor, unemployed man who, in search of a new world, decides to explore the world in the filthy sewage pipes under a manhole. The fourth is a wealthy man fearing for the safety of his corpus and his family, his vigilance bordering on obsession, deciding to dig a tunnel to hide his precious possessions from the all-pervasive, prying eyes of the Bazaar. Another middle-class man is driven to exasperated madness because he had lost all his memories, replaced effectively in the beginning by the ups and downs of the Bazaar and its dealings, to complete dementia and Alzheimer’s disease.

The fragments in each chapter carry imaginative titles like ‘God Was With The Bazaar Because He Was Not Mad’, ‘He Was Digging A Tunnel To Escape From A Blind Tunnel’, ‘Bazaar Was Watching Everyone, Especially The Madmen’, and ‘A Dream Inside A Dream And Blood On The Palms’, to name a few. Chaturvedi’s knowledge of the medical profession is indicated in the witty exchanges between the various doctors (psychiatrist, ophthalmologist etc.) and the patients, apart from the whole irony of the doctors, under the complete dominion of the bazaar, bent on disbelieving the patients and their maladies. Chaturvedi’s portrayal of the bazaar as a cold, calculative individual who will stop at nothing to cash in on any opportunity to expand business is both hilarious and scary: treating potential customers with extremely fake concern and reverence, robbing them of their power to think and choose by giving them a false sense of warmth and care. In the novel, the conversations of the Bazaar with the customers are several, and perfectly crafted, with the tone of a regular Customer Care operative who apologizes, distracts, reveres and persuades, all in the same vein.

The fourth chapter takes the stories to their culmination: while the man living in the manhole becomes a newsroom and social media sensation, his legend grows, he prowls the city in the darkness; the man who had lost his dreams loses his mind, wearing shoes on his head and walking barefoot in the Bazaar’s world, collecting pieces of his broken, bleeding dreams; the wealthy paranoid man manages to hide his gold and money in a dirty tunnel he has dug, but eventually dies when forced by his son to retrieve them at night time, though his legacy is passed on to the intrigued son who wonders whether there was any truth in his father’s constant ravings; and the man looking for freedom from the Bazaar is eventually deified into ‘Tunnel (Surang) Baba’ with a growing cult following, secretly happy to see the rising number of madmen brought to seek his blessings. Chaturvedi renders the final rebellion and silver lining at the climax, to be wrenched by Time in the brief fifth chapter/conclusion, the when, why and how of which is to be read in order to feel the enormity of the classic coup d’état.

The novel defies a single sitting, breezy reading by the complexity of both its narrative structure and its theme. The unnamed characters come from varying backgrounds and their fears come alive to the reader eerily, at different junctures. It is disappointing however, that there are no central female characters, and the marginal woman characters are strictly in line with the machinations of the Bazaar. There are typographical errors which feel jarring. The striking cover page deserves a mention with a golden throne in the air, juxtaposed against the image of a prowling tiger and its garbled, inverted reflection, matching only in the outline, in keeping with the theme of the madhouse, the Pagalkhana, where nothing is what it looks like. The sensitive readers will find it easy to share the completely valid anxieties of the writer, and the clinical explorations of the psyche of both kinds of people: those with and those against the Bazaar. The novel deserves to be translated widely in order to be accessible to readers across languages, possibly being one of the most detailed and clear-eyed interrogation of where we stand and where we are heading as a global society.

Kalyanee Rajan works as an Assistant Professor in English, Shaheed Bhagat Singh Evening College, University of Delhi. Her areas of interest include reading and researching Indian Writing in English and translation, reviewing books of different genres, writing-reciting poetry in both Hindi and English, leading workshops on various aspects of teaching-learning, and, following natural sciences and global politics. She co-edits Lapis Lazuli: An International Literary Journal (LLILJ).