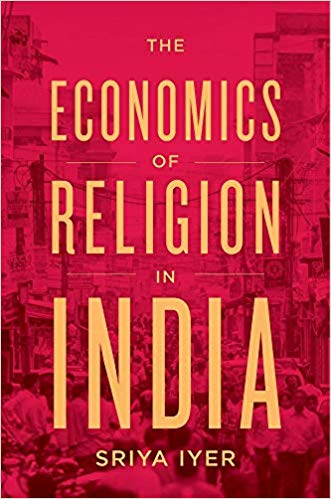 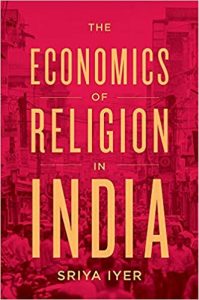 Religion in India with all its complications has been a subject of study for social scientists from a range of disciplines including sociology, history and politics. Iyer underlines an economic approach to the study of religion which ‘involves the application of economic theory and statistical methods to evaluate the role of religion in society at both micro and macro levels’(p. 11).

At the macro level she covers a broad range of issues including the relation between religious conflict and economic growth, the provision of religious and non-religious services by religious organizations in a religious market ‘in response to income inequality and the competition for adherents’ (p. 73), the role of reputations and networks in relation to religious marketing; and, inequalities in education, employment and credit on the basis of religion. While there is less focus on the micro-level relation between economics and religion, a chapter on the ‘modern Madrasa’ looks at ‘innovation’ especially at the level of the curriculum and draws on interviews with Muslim clergy.

For the broad themes around religion and economics Iyer draws on an interesting range of datasets. For example, using the World Values Survey data (1990-2001) she concludes unsurprisingly that in India ‘people are religious, attend places of worship reasonably often, and believe in the existence of God’(p. 41). A comparison of the Indian figures with the global average in this internationally comparative dataset might have provided an important context to these results. Further, since the WVS also has other demographic variables, and a variety of questions on religious attendance and observance, a more nuanced analysis of religion and religiosity (a more complicated concept which could be operationalized through the range of questions in the WVS) would have allowed for a focus on how these patterns have changed over time.

Iyer discusses in some detail the India Religion Survey (IRS) data collected by her and her colleagues through a survey of 568 religious organizations across seven States. This is an interesting dataset given the range of issues covered; however, one would have wished for more detail. There is little explanation on why the seven States, and the specific districts within them, were chosen; and, what the repercussions of this sample selection might be for her analysis. Further, to capture change post-liberalization in religious organizations’ service provision, an important aim of her work, the data collects retrospective information from the organizations asking them to recall the period pre-1991. What are the limits of such self-reporting and recall bias in a cross-sectional survey used to study over time change? How might this data have influenced the conclusion that over time there has been an increase in service provision across the board by all religious organizations in response to (a perception of) increased economic inequality and an absence of state provision? Could other data be used to triangulate this perception of decline in state service provision and a purported increase in the organizations’ service provision? Beyond perception, would it have been possible to draw on any data that reports an actual decline in the state’s service provision across time and across States? In other words, could the actual provision of services by the state be modelled along with the organizations’ perception of it? The question could then be: in States with particular public policy provisions, does religious competition work the same way as it does in States which do not have that public policy provision? On a related note, there is limited State-level (or rural-urban) disaggregation of analysis in the book which is disappointing given the complex nature of issues across States(and across rural-urban locations within States) in India.

For non-economists this book provides an overview of the existing literature in the area as well as insights into the way economists ‘model’ the real world. For instance, Iyer theoretically models the economic approach to competition and service provision in which religious organizations are treated as firms competing in the market for ‘adherents’ (p. 159). An application of this model to her data other than a simple description of variables and patterns of inequality, would have made it richer.

While statistical analysis is not the preserve of economists, one expects more from a book that reiterates the significance of statistical methods for an economic study of religion. A large part of the book simply describes variables and this description is then worryingly used to make inferential statements with policy implications. Not only that, the description of variables itself, while useful to understand the survey findings, is inconsistent with tables that often display raw counts and not percentages. This makes comparison, of service provision among other things, across religion/other categories tedious. The author often jumps between her own (limited) analysis, and what she and her co-authors have reported elsewhere (which seems to be more statistically rigorous), which forces the reader to make those analytic jumps as well. For example, the statement that ‘economic differences’ between Hindus and Muslims ‘are salient because they have contributed, through religious competition, to the rise of Hindu fundamentalism in India since the nineteenth century’ (p. 237) has no clear accompanying empirical analysis in the book, nor does any of the data discussed extend as far back as the 19th century. Similarly, it is not clear what ‘evidence’ the author is relating to when she concludes that ‘religious organizations are both differentiating themselves more and providing more education and health services in response to the rise in income inequality and religious competition in India over the past two decades’ (p. 179, emphasis added). It is not clear if there is any statistical model that tests for this in the volume. Instead, it appears that she is drawing on the description of inequality in India by religion, and the separate discussion on the perceptions of inequality of religious organizations, as well as other works not discussed in detail in the book, to draw this conclusion.

Finally, the author comes late and inconsistently to a discussion on caste, which is surprising in a volume with such strong emphasis on Hinduism. There is little discussion on the centrality of caste (in and beyond Hinduism), and how caste may be relevant for the IRS data on religious organizations. There is also some confusion around the use of terms such as ‘Dalit’ along with ‘Scheduled Caste’(misidentified as having been Constitutionally enshrined in 1947 rather than 1950, p.166) which in turn lead to confusing statements such as ‘Dalits can belong to any religious group’ followed by the use of the Constitutional term Scheduled Caste, which is a category that does not include all religious groups (p.166).

A repetitive and disorganized structure to the book and data analysis detract from what is an interesting area of research with important ramifications beyond economics. The strength of the book which surveys a vast expanse of issues around economics and religion is also its weakness, since one does not come away with a detailed sense of any one of the themes covered. In spite of this, the book begins an interesting conversation on an important theme which will be of use to those who would like to know more broadly about how economic behaviour connects to other forms of social behaviour of which religion is a key component.

Divya Vaid is with the Centre for the Study of Social Sciences, Jawaharlal Nehru University, New Delhi.