In Search Of Another Tradition 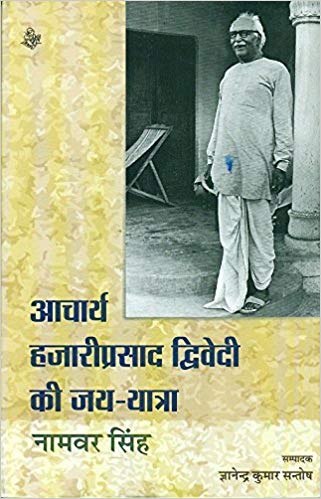 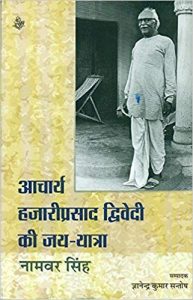 This edited book is a collection of sixteen essays and speeches of Namvar Singh on his guru, the scholar and writer, Hazariprasad Dwivedi. It also contains a small separate section of references on Dwivedi that are scattered in Namvar Singh’s other writings and interviews. The book begins with the assertion that it embodies the joint wisdom of this pair of writer-critic-scholars in which each illuminates the writing of the other. Those who are already introduced to Namvar Singh’s writings on Dwivedi will not find anything significantly new. Singh’s comparatively recent lectures that have been included also rehearse themes and topics that have been explored by Singh earlier. The usefulness of the book can be found not in presentation of new material but in a fairly representative selection of Namvar Singh’s writing covering the entire range of Dwidedi’s writings from his literary essays to his novels to his academic research.

Namvar Singh places Dwivedi as a scholar in the tradition of Pandit Ramavtar Sharma, Chandradhar Sharma Guleri and Rahul Sankrityayan, great polymath and polyglot scholars with special interest and proficiency in ancient and medieval Indian culture and refuses to limit him to the list of Hindi academics and historians. The brilliance of these writers and Dwivedi is that they brought together within them the two disparate traditions of the classical and the folk. And for Namvar Singh, unless you bring these two together you are an incomplete Indian (scholar?)(p.149). Studying the folk must not be left to the anthropologist and folk studies which Dwivedi elsewhere suggests will lead to museumization of culture.

In a discourse given on the use of myths in Dwivedi’s writings (Dvivedi Sahitya Mein Mithakiya Prayog) Namvar Singh informs us that the word mithak for myth in Hindi was created by Pt. Hazariprasad Dwivedi. Dwivedi saw myths as important cultural texts to arrive at any understanding of Indian culture and in no way less important than the written texts. The centrality of myths in Dwivedi’s writings is directly linked to his concerns of the lok or the ‘folk beliefs’. He defines mithak as that which appears untrue at a distance but is found to be true upon close inspection. Myths appear illogical but have their own logic and rationale. Dwivedi has used common myths and folk beliefs to interpret many mysteries in classical literature (sastra). This use of myth pervades his entire thought process. Hence it is not only in his academic writings on classical thought and aesthetic principles that he has expounded on myths but very interestingly his literary essays on Indian culture as well as his novels contain extended play with myths and folk beliefs. So in his book on Kabir we find attempts to uncover the myth of the tortoise in the Niranjan sect through folk traditions which could not have been possible only through written treatises. There is a long episode of uncovering the origins of the name of gadahiya tal in his novel Charuchandralekha. In ‘am phir baura gaye’ (Mangoes have flowered once again). Dwivedi takes up the puzzle of mango flowers as antidote to scorpion bite. He expands upon this process of myth formation while at the same time skilfully demonstrating how the illogical can be illuminated to make sense out of seeming nonsense. How the folk helps in unpacking the mysteries of the classical. In his attempts to interpret Indian myths in an eclectic manner, Dwivedi provided Indian criticism with a completely new cultural perspective.

Namvar Singh refers to Claude Levi Strauss’s work on establishing the internal logic of myths but in the same breath invokes Octavio Paz who wrote, ‘I admit that myth is logical but I do not see how it can be knowledge’ (p.108). Singh warns against the postmodern tendency of mythifying everything and posits myths against science. To differentiate Dwivedi and his exposition of myth from Nirmal Verma’s uncritical celebration of myths, he asks rather simplistic rhetorical questions: can we defend ourselves from China by using myths? Will myths make steel and industrial progress? The difference between scolars like Nirmal Verma who eulogize myths and Hazariprasad Dwivedi, in his opinion, is in the ‘scientific spirit’ of Dwivedi which keeps him attentive towards the danger of creating new myths while interpreting them.

Hazariprasad Dwivedi uses two myths in explaining his historiographical understanding—the myth of sav sadhna (meditating sitting on the corpse) and the myth of mahakal. Sav sadhna is the tantric practice of meditation through which the face of the corpse turns towards the practitioner. He uses it as an allegory for studying the past. For him, researching the past was not an end in itself but merely a way to throw light on the present. This approach to the study of the past becomes the basis of Dwivedi’s postcolonial critique of the Orientalist study of ancient India by both foreign as well as Indian scholars which takes a kind of museum interest in the Indian past. Singh argues that removed from the social context the ancient texts have been reduced to objects of exhibition.

The historiographic perspective that was established to view the history of ideas was anchored in the tradition of western history of ideas and Indian intellectuals did not have any place in it. Singh stresses that it was the intellectual tradition and historiographic perspective that was Dwivedi’s most important concern. He links this deep pain in Dwivedi of being cut off from the Indian intellectual tradition to similar sentiments expressed by Ravidranath Tagore.

Contrasting the western Orientalist insensitivity to the Indian past and traditions, Singh argues that in Karl Marx’s writings on India before 1857, describing the British colonial impact on India, can be read the pain felt by Dwivedi and Tagore on British colonialism’s destruction of the entire structure of Indian society as a result of which Indian people found themselves cut off from their ancient past. However, Singh points out, Marx also writes about the regenerative role of colonial rule when it becomes the medium to bring industrial revolution to India and hence creating the necessary conditions of its eventual overthrow. Harish Trivedi has commented, ‘Dwivedi and Marx blend without contradiction in Namvar.’ Singh reads Marxist dialectics in Dwivedi’s concept of sav sadhna of history in which sadness and joy coexist. He finds this sensibility towards the study of the past in Walter Benjamin’s Against History in which Benjamin uses Paul Klee’s painting Angelus Novus de la Historia who is looking towards the past while caught in the winds blowing from the future.

Namvar Singh identifies the essence of Dwivedi’s writings to be the concept of‘punarnava’ or revitalization. It is this punarnavata which guides modernity, creativity and originality. Punarnava is also the title of one of his novels. Most of his work including all of his novels are based on time periods long past. He has been criticized to have not gone beyond medieval times in his thought and merely writing about old themes. Namvar Singh asserts that it is in fact this revitalization of the old, his punarnavata which is his originality. It will not be an exaggeration to suggest that the entire force of Hazariprasad Dwivedi’s oeuvre is revitalization of Indian culture in all it diversity, complexity, vastness and contradictions against the one dimensional traditionalism.

Singh underlined the difference and originality of Acharya Dwivedi’s literary historiographical vision to that of Pt. Ramachandra Shukla. While comparing the writings of Shukla and Dwivedi he tried to show the difference in the understanding and values of literary historical criticism in the difference of one generation (p. 15). In his Hindi Sahitya ki Bhumika, Dwivedi does not divide history into separate periods but emphasizes the continuous flow of history. He places Hindi literature in a pan-India context by writing a preface longer than the history itself in which he deems it important to link Hindi literature to a variety of stream of thoughts found in the Mahabharata, Ramayana, Puranas, writings of the sant sects, Buddhism and Jainism.

Dwivedi was not only a writer and critic of literature but a very important contributor of writings on Indian culture. He is also unique in his contribution to the field of Indian aesthetics. He wrote Prachin Bharat ke Kala Vinod (Aesthetics of Ancient India). Singh attributes this interest in culture and aesthetics to Dwivedi’s intellectual training in Shantiniketan. In fact it is theorization of Dwivedi’s phenomenal work on Indian culture by Namvar Singh that is inadequately represented in this volume.

The representative book of Namvar Singh on Hazariprasad Dwivedi still remains his tour de force, Dusri Parampara ki Khoj (In Search of Another Tradition) which is of almost the same length as this edited volume but establishes Dwivedi and his writings in a more comprehensive and structured manner.