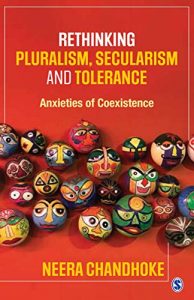 From India’s most clear-headed political theorist Neera Chandhoke (a former Professor of Political Science at Delhi University), comes a new page turner—an extraordinarily accessible and yet tightly argued monograph on the nature and value of contemporary India’s plural democracy. Anyone familiar with Chandhoke’s earlier works such as Democracy and Revolutionary Politics (Bloomsbury, 2015), or The Conceits of Civil Society (Oxford, 2003), would already be aware of her unique ability among social scientists to perfectly balance lofty theoretical reflection with grounded empirical information. In her most recent couple of books, she had also begun experimenting with more literary references as well as more elaborate philosophical explorations. Now, in her newest book, each of these talents and interests manifest in full bloom, with a social scientific, evidence-based thesis that is at the same time framed and articulated through numerous literary and philosophical excursions, through epics and ethics.

An excerpt from Mark Anthony’s speech in Shakespeare’s Julius Caesar would seem to set the tone for the text, serving as the book’s epigraph, but the opening pages reveal a deeper and more enduring concern with the Santi Parva of the Mahabharata. From the Mahabharata to Shakespeare’s Merchant of  Venice, or from John Locke to the Constitution of India, what we find resonating in literature, philosophy and basic law is anxiety about coexistence, and techniques for its just achievement. Pluralism is a fact, especially, but certainly not exclusively, in India. The question is, is it also of value?

This is Chandhoke’s focus in the first chapter, where she takes up a robust defence of normative pluralism, further strengthening a medley of convincing arguments that she had first begun to articulate toward the end of her earlier book, Contested Secessions (Oxford University Press, 2011). The first chapter also adumbrates salient features of secularism, beginning to clarify its true meaning and utility. Fuller treatment of secularism ensues in the third (on the secularism debates within political theory) and the fifth (on the historical evolution of secularism up to the era of the Constitution) chapters.

The second chapter presents a portrait of secularism’s opposite: communalism. For, as Chandhoke argues, the oft-forwarded binary of secularism versus religion is false; the true opposite of secularism is communalism, and the inevitable logic of communalism in an agonistic social world is violence. The history of the city of Ahmedabad serves as the archive for documenting communal violence, and in the process reveals insights about how such communalism is both manufactured as well as how it could be prevented. Although a theorist with philosophical inclinations, chapters such as this one illustrate Chandhoke’s unswerving commitment to field-based research and evidence.

Part of the construction of communalism consists in the homogenization of culture and religion. The fourth chapter takes up the homogenization of Hinduism in a sweeping canvas going back to colonization, orientalism, and the anti-colonial movement. Chandhoke’s reading of German philosopher Hegel’s India is particularly interesting to this reviewer, but the narrative throughout the chapter—whether covering Swami Vivekananda or Dr BR Ambedkar—is both engaging and sound.

In the sixth chapter, Chandhoke revisits and revises arguments from her earlier book Beyond Secularism (Oxford University Press, 1999), weaving in aspects of her crisper current take on the issue—basically, that secularism is a thin, strictly procedural concept that is essential for the functioning of plural democracies. And if secularism is procedural, or operative within the domain of the state, then its social corollary is what we refer to as tolerance. Tolerance as a social virtue is the subject of the seventh chapter, which intriguingly turns empirical again, just as the second chapter had done. But while in the second chapter we see Ahmedabad stand in as an archival site of violence, in the seventh chapter we are presented with the contrast of undivided Punjab as an archival source for the practice of tolerance.

Although Rethinking Pluralism, Secularism and Tolerance is written with equanimity and ubiquitous reference to our global literary heritage, the author claims an urgency for the thematic of the book, and the daily news of violence erupting across India lends credibility to the author’s claim. For she finds a direct correlation between decline in adherence to secularism today and increase in violence against religious minorities. Thus she seeks to breathe new life into secularism, but at the same time to clarify that the concept is a thin and functional one, representing equality between religious groups, not a substantive one to be overburdened with the task of curing all of our social and political ills. And though thin, it remains essential: secularism is a precondition for the viability of plural democracy. As long as we remain committed to democracy where pluralism is a fact, we must operationalize secularism, or equality between religions; and as long as we value pluralism, we must maintain commitment to secularism. To be sure, in the absence of pluralism, or in the absence of democracy, secularism may be discarded, but if pluralism or democracy is extant, then we are more or less choosing between secularism and violence.

This may be Neera Chandhoke’s finest work till date. What is so impressive about it, in addition to the perfection of the grounding of theory in fact and the interweaving of literature and philosophy into a crisp and clear normative political theory, is, more generally, the way that it holds up a mirror to ourselves. The book reflects Indian social and political life today, and then eloquently guides the reader through a rich and rewarding narrative of just how and when and why we began to look the way we do now. The only part that remains unexplained, because it remains entirely up to us, is what it is we will do next. Shall we opt for the peaceful coexistence sought for as far back as the Santi Parva, or instead for the communal violence that always lies ready and waiting as human nature’s baser instinct, standing by as the cheap and easy option?