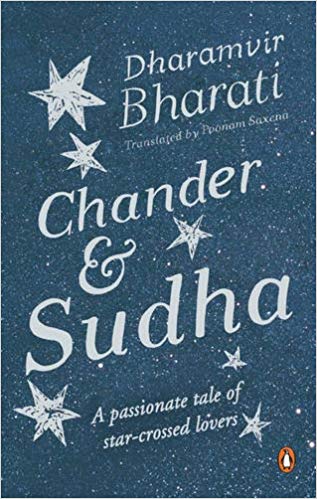 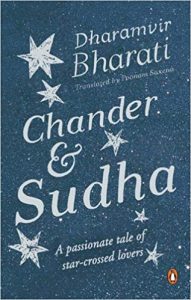 The great modernist writer Dharamvir Bharati has enjoyed much critical acclaim in translation and/or adaptation into several languages including English. Outside the Hindi world, he is celebrated most notably for stage and film adaptations of his verse play Andha Yug and the novel Suraj ka Satvan Ghoda. Most general Hindi readers also know and love him as the editor of Dharmyug, one of the bestselling middlebrow magazines in Hindi. The translation of Gunahon Ka Devta is now available to us in an English translation as Chander & Sudha. This translation is particularly significant because, at close to a hundred reprints in Hindi, the novel is often counted his most commercially successful and, therefore, arguably his most widely read work. Bharati was just 23 years of age at the time of writing Gunahon Ka Devta.

First published in 1949, Gunahon Ka Devta is set in the city of Allahabad and centres on the tumultuous relationship between its primary protagonists Chander and Sudha. The cover of the first edition of the English translation declares the novel ‘a passionate tale of star-crossed lovers’, immediately locating it as a romance. However, the novel is an active interrogation of precisely the ‘star-crossed’ quality of this love: it shows how its protagonists’ deterministic notions of love, propriety and morality result in their leading unhappy and unfulfilled lives. Bharati’s original Hindi subheading to the novel, ‘Madhyavargiya Jivan Ki Kahani’ or, ‘A Story of Middle Class Life’ perhaps is a more accurate representation of the novel’s central concerns. The author’s emphasis lay in deconstructing the lives of his primary protagonists who interacted freely and regularly under the same roof but were not able to act on their affections because of several considerations, most significant of which rose from their entrenchment in middle class morality.

The first angle through which we can see it is the embeddedness of the notion of propriety in caste. Sudha first meets Chandrakumar Kapoor or Chander through her father Dr. Shukla who is Chander’s professor and guide at the University. Dr. Shukla is characterized as an affectionate father who does not actively practice caste and class prejudices. For instance, Dr. Shukla welcomes Chander’s visits to the house and encourages his closeness with Sudha and her cousin Binti. Dr. Shukla also advocates that Sudha should marry an educated man with a progressive world view. However, Dr. Shukla looks for Sudha’s prospective husband in his own caste: ‘The most important thing in a marriage is cultural similarity… if a girl marries into a different caste, she will not be able to find the correct balance”’ (p. 49). Dr. Shukla’s belief about marital harmony ends up being at odds with his daughter’s ideas about marriage when Sudha declares that she has no interest in getting married, even becoming physically ill at the very thought of it. He asks Chander to convince Sudha to marry her future husband, who does so against his own will because of his own notion of duty. Therefore, Bharati skillfully interrogates the economics of love in this melodramatic scene where, even though the gentle father is agitated that his daughter is deeply unhappy, he expresses care for her in clearly paternalistic terms. He, and even Chander, are unable to see that Sudha’s views may be different yet equally legitimate. Here, ‘middle-class life’ stands in for giving an appearance of valuing autonomy, but in real terms, Sudha’s life is no different from that of her cousin Binti’s, who is actively oppressed by her mother in the village who expresses similar views on marriage.

More notably, love is also inextricably tied to sex and sexual relationships in the novel. Bharati very vividly and evocatively describes the sexual relationship between Chander and Pammi, an Anglo-Indian woman separated from her husband. However, the characters’ relationship with the idea of sex and sexual pleasure is often fraught with questions around philosophical ruminations on the meaning of what they understand as ‘true’ or ‘pure’ love. Sudha views sex exclusively in terms of wifely duty—-she constantly refers to her husband as a kind person but recoils from his sexual interest in her: ‘Chander, he is a very good man, he has every good quality. He has very progressive views, he loves me a lot. He doesn’t place any restrictions on me…but my soul revolts against the price I have to pay to stay in this heaven…’ (p. 213). Since marriage is tied to sex, Sudha begs Chander to never get married, to ‘remain the way you are’ and ‘don’t do anything to besmirch your character’ (p. 215). On the other hand, this conversation takes place in her bedroom where Sudha and Chander drink tea from the same cup and he touches her forehead while she cries (p. 214). The novel is replete with such instances of affection. Sudha finds these terms of intimacy ‘pure’. While Chander has sublimated his desire and love for Sudha due to Dr. Shukla’s views on inter-caste marriage, Sudha has chosen to shroud their romantic encounters by creating a vocabulary of innocence around them.

Chander’s relationship with sex is even more complicated. Unable to voice his love for Sudha, a disillusioned Chander begins an affair with Pammi. While he finds pleasure in the sexual act itself, Chander considers the act as disembodied from any feeling. However, after Chander has the above conversation with Sudha and then later receives her letter where she again complains about how conjugal life is ‘a veritable hell, hurts every part of my body’, he cries out to Binti, ‘I believed in love and hated sex. But now I think they are one and the same thing.’ Chander’s everchanging ideas about love and sex in fact often fan Sudha’s neurosis: it is Chander who has convinced Sudha to marry against her will but his own discomfort with Sudha’s sexual relations makes him regularly storm in and out of Sudha’s life, and we see how each of these encounters makes her emotionally and even physically weaker. Bharati’s unpacking of Chander’s increasing mental and physical turmoil that largely results from his caste and class position as well as a misplaced sense of propriety, duty and masculinity, as well as Sudha’s growing neurosis that centres on Chander’s reactions lies at the heart of his ‘love story’.

Sudha’s cousin Binti’s response to sex is one of the other perspectives in the novel: she sees sex not only in terms of a wifely duty but also as ‘very natural, as normal as eating, laughing or talking’ (p. 219). Binti firmly situates her ideas in her village upbringing —‘village girls are much smarter in these matters than city girls’ (p. 218). This makes us revisit the question of ‘madhya vargiya’ or middle class life. Bharati with his complex portrayal of love, sex and relationships asks the question whether middle-class life actually affords any freedom for its characters. The answer the novel gives us is a resounding no.

The novel culminates in Sudha’s untimely death, ostensibly from childbirth but accelerated by heartbreak. The epilogue shows Binti and Chander immersing Sudha’s ashes. Chander & Sudha does have alternative endings for other lovers—when Sudha’s friend Gesu’s lover Akhtar marries her sister instead of her, she decides to finish a maternity course and begins working at the hospital. Dr. Shukla breaks Binti’s engagement because, even though they are from the same caste, her prospective in-laws are manipulative liars. Chander’s lover Pammi returns to her estranged husband and one only wonders if she will find happiness there.

Throughout his long literary career, Dharamvir Bharati straddled several literary positions—not only was he a part of the ‘Parimal’ group in Allahabad, but he also constantly grappled with other positions and literary camps to arrive at the question of how to best represent social reality. In Gunahon Ka Devta or Chander &  Sudha, Bharati plays with the genre of romance: the novel is a melodramatic representation of lives left unlived if we adhere to social codes of morality rather than follow our personal code of ethics. Poonam Saxena’s translation captures Bharati’s beautifully illuminated Allahabad and its sprawling bungalows which Sudha is destined only to leave through marriage. The translation is a valuable contribution to the study of the Hindi popular, the genre of romance as well as Bharati’s ouevre.