Is That What She Meant? 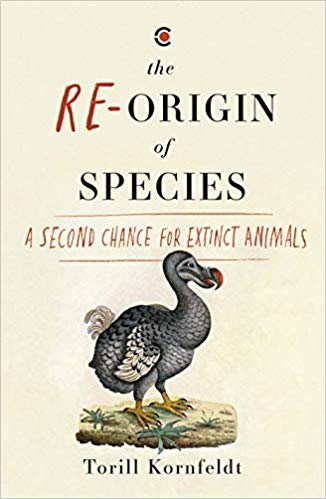 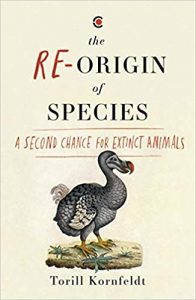 Reading Torill Kornfeldt’s book The Re-Origin of Species: A Second Chance for Extinct Animals feels a little odd. Part of that is to do with its translatedness. Make no mistake about it; Fiona Graham has done an excellent job, barring an occasional infelicity such as nanny goats ‘falling pregnant’ (and there are quite a few avoidable errors of copy editing). And I am still trying to work my tongue around Stewart Brand’s drawl adding an ‘sh’ sound to every ‘w’. No matter. I am, however, reminded of Spanish-speaking friends who used to say that Gabriel Garcia Marquez sounded quite different in his own voice in Spanish from either Grossman’s or Rambassa’s voices in English (and Kornfeldt’s descriptions of the biotechnology involved can feel pretty much like magic realism, too). I keep wondering how Kornfeldt’s book sounded both in Swedish and in 2016 (when it was published). That two-year gap creates an additional odd sense of datedness in a field where things were changing, as Kornfeldt points out, even as she was writing. In fact, the deeply personal voice and immediacy with which Kornfeldt apparently writes enhances this nagging, permeating sense of, not worry exactly, but a subliminal anxiety, about ‘is that what she meant?’ and ‘is that when she meant it?’

The central conceit that the book takes on, the ‘re-creation’ of extinct species using a range of biotechnological methods is imbued, of course, with the same oddly dislocating idea of translatedness. As Kornfeldt repeatedly points out, many of these efforts at ‘re-creation’ will end up creating, ‘a new species, not replicas of an ancient one’. No wonder I keep wondering how much of her book, too, is a new book, and not a replica of a 2016 Swedish book.

Kornfeldt, even in her introduction, makes it clear just how limited her perspective of ‘science’ is. She is worth quoting on this: ‘Each day as a science journalist brings me examples of how scientific curiosity and zeal are improving life for almost all human beings. These range from the technology we use to the medicines we take, the food we eat and the clothes we wear.’ There is a lot to unpack there. In the first place, not to see that medicines, food and clothes are, in fact, all ‘technologies’ is to miss the core meaning of ‘technologies’. More importantly, it is evident that for Kornfeldt, the basic connection between (natural) science and society is through the development of technologies. While it is not incorrect, such a perspective is deeply limited and does enormous disservice to the potential of the (natural and social) sciences for democratic empowerment, understanding the nuance of cause-and-effect in the world we live in. One (if not the) crucial question in all these sciences is one that Kornfeldt never asks: ‘How does/did this work?’ It is remarkable that she sees the ‘zeal’, the ‘boundless enthusiasm’, and the ‘curiosity’ of the scientists she meets, and yet never quite seems to see that (among many other things) they are looking for ‘mechanisms’ and new ways of discovering them.

What are the various genetic-biochemical means that allowed mammoths to be cold tolerant? How do they work? How did they come about? How is it that elephant stem cells are so hard to generate? What is the narrow range of genetic-biochemical changes that contributed to the huge alterations in natural behaviour between the passenger pigeon and the band-tailed pigeon? Kornfeldt sees these as passing obstacles, to be overcome by the brilliance of the George Churches of her sweeping narrative, on their way to get a baby mammoth romping in the snow. But it is these intermediate steps that are the more crucial points for science, and for understanding how the world works.

Kornfeldt does, however, capture the hubris, the fantasizing, and the general all-round silliness that individual scientists also passionately bring to their work, in common with any other human endeavour. More broadly, she also sees the silly nostalgia that forms a part of the passion put into these ‘re-origin’ efforts. She brings a very sophisticatedly sceptical eye to the claims of either vicarious guilt-and-responsibility for ‘restoring’ species, or of ‘fixing’ the environment by introducing such extinct species, or the even more ambitious techno-nostalgia of ‘re-wilding’. In fact, it is a bit odd that Kornfeldt makes herself the intermediary voice of the counterpoints to all this cheerful hubris she collects; there are no critics interviewed and presented as enthusiastic, bubbling, human presences, we hear only their disembodied criticisms.

Kornfeldt is very much the intrepid Swedish traveller abroad, in far-flung, exotic locales, meeting weird people––weird not just because they are scientists (!) but also because they are not Swedish. Sweden crops up as a point of perhaps-familiar reference in otherwise somewhat pointless little details; the mammoth genome study included scientists at the Swedish Museum of Natural History, we are told, and there are stuffed passenger pigeons in Lund. Again, I wonder about ‘translatedness’.

Yet, Kornfeldt describes the actual genetic technologies involved, their problems and their promise, with an endearing blend of wide-eyed enthusiasm and careful accuracy. It is therefore a pity that she seems to make little distinctions between the Church or Novak’s efforts to build a mammoth or a passenger pigeon on the one hand, and the Fernandez-Arias’s effort to rebuild the recently lost bucardo on the other. This is a disservice both to her own explanatory skills and to the spectrum of efforts and intentions that she is trying to explain. Notwithstanding this, her even-handedness in describing her own (and perhaps many other people’s) complicated response of delight and worry is charming in its uncertain humilities.

While the delight is concrete and specific, however, the worry is limited in its abstractness. Lap-sized Jurassic Park style pets? Mega-herds of woolly mammoths grazing (and gambolling in) the Siberian tundra? Oh my goodness gracious, wow! However, Kornfeldt’s worries are by and large far more indistinct; do we have the right to do this? Will it cause more problems than it solves? The book has none of the real people whose lives will be forever changed if these ‘re-wilding’ plans materialize. In fact, the book talks a great deal about the Pleistocene Park of the Zimovs, father and son, their lives, personalities, and their plans for mammoth mega-herds for re-wilding the Siberian tundra. Yet, the park is in the Yakutia (or Sakha) province of Russia, and the Yakut community comprises half the local population of a million. How will the mammoth herds alter the lives of this pastoral community? How will they adapt? How, in fact, will they adapt, are they adapting, with or without mammoth herds, to climate change? Has anyone asked them what they think about the re-wilding plans of the re-creators of extinct species, of the Churches and the Zimovs? Even Kornfeldt, for all her abstract worries, does not seem to have talked to anyone from the community. I am left with the uneasy sense of a politics-sized hole in Kornfeldt’s entertaining and informative book.

Satyajit Rath is with the Indian Institute of Science Education and Research, Pune.