Life Of Two Generations On A Broad Canvas 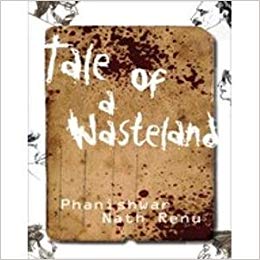 Phanishwar Nath Renu (1921-1977) is among the most loved authors of contemporary Hindi literature, particularly for his brilliant first novel Maila Anchal (1954) and celebrated short stories like Tisri Kasam (The Third Vow), Raspiriya and Panchlight. Some of the short stories and Maila Anchal have been translated into English, together with Renu’s short novel Kalankmukta. His second novel Parti Parikatha has long remained in Maila Anchal’s shadow. Its translation by Murari Madhusudan Thakur as Tale of a Wasteland is to be warmly welcomed as an opportunity to return to it with fresh eyes. (Renu’s equally interesting 1965 short novel Julus, about a colony of East Pakistan refugees resettled in North Bihar and their fraught interactions with the nearby village, remains untranslated).

The 1950s were perhaps the most exciting and creative decade of Hindi fiction. We tend to associate it with the new generation of Nai Kahani writers like Mohan Rakesh, Mannu Bhandari, Kamleshwar and Rajendra Yadav, but it was a golden decade for novel writing as well (see Vasudha Dalmia, Fiction as History, Permanent Black 2017). If in 1949 Dharamavir Bharati had made young readers long and cry with Gunahon ka Devta (tr. Chander & Sudha by Poonam Saxena, Penguin India 2015), in 1952 he teased them with the pastiche of Suraj ka Satvan Ghora. Rangeya Raghav published his searing Kab Tak Pukarun in 1957, while Krishna Sobti’s startingly original ‘herstory’, Dar se Bichuri (tr. Memory’s Daughter by Smrit Bharati, Katha 2002), appeared in 1958. Twenty-three year old Renu burst upon this literary scene in 1954 with Maila Anchal, and the novel’s oral quality and playful inventiveness with language, which forces readers to ‘immerse themselves in the oral world’ of speech, songs, and tales, surprised Hindi readers and has continued to delight them ever since.

The first decade after Independence saw several Hindi writers look back to the nationalist movement. In his novel Balchanma (1952) Nagarjun highlighted the transformative experience of the Kisan Sabha in Bihar for small peasants and landless labourers, while in Jhutha Sach (part 1, 1958, tr. This is Not the Dawn by Anand, Penguin India 2010) Yashpal traced the gradual communalization of politics and its effects on the young generation of college students in Lahore. Even Maila Anchal looked back to the final years of the nationalist movement from the peripheral perspective of Maryganj, a village of Purnea district in north-eastern Bihar. But while its title gave the name to a whole ‘anchalik’ genre of novels that supposedly expressed nostalgia for the rural world, the novel actually emphasized the very dynamic nature of the village, with its changing land holdings and caste equation. Through its lively characters, Maila Anchal embodied the differentiated experiences and local understandings of the nationalist movement as opposed to the official history of the movement as a unifying force.

Parti Parikatha is, like Maila Anchal, an ambitious novel, all the more interesting because it confronts the postcolonial state predicament of nation-building and development from a very unusual perspective. Like Maila Anchal, it is a choral novel with many characters and stories and loving attention paid to local folklore, but it also carries a clear political message. The bureaucracy inherited from the colonial state, the factionalism of democratic politics, and the haughty, top-down approach of the developmental state will not work, unless they include the people and transform them so that everyone works together for the common good. And the best way to do so in a village context is… through folklore.

The wasteland of the title is the Kosi basin with its ever-changing course and barren dunes, ‘This is not land, this is the corpse of a land over which spread row upon row of white-sand creatures, like a shroud over a dead body… Hundreds of thousands of acres over which the rains grow a little green grass like fleeting hope’ (p. 5). In local lore, Kosi was mistreated by her mother­—and brother-in-law and fled, destroying the land behind her so as to avoid capture, aided by her step-sister Dularidai. Kosi’s anger and curse are terrible, yet the land will not die: wherever her tear falls it creates a little pool around which green grass will grow, and she promises to Dularidai that no inhabitant of the region will ever starve. The five pools of the Dularidai river in village Paranpur are also part of the myth—Sunnari Naika lured and tricked demons to dig them over five nights. Paranpur is the centre of the region and has a fair number of graduates and poets, one high school, one literary magazine and a library, now defunct. Girls are getting educated, too, and the teacher is a local Dalit girl, Malari.

If in Maila Anchal the educated would-be reformer from outside was Dr Prashant of the malaria centre, here it is local son Jittan, who has returned to his family’s empty haveli after years spent away and underground with a number of parties. His dream is to make the Kosi basin fertile, but his aloofness and sophisticated tastes (Degas’s pictures of half-naked ballerinas) arouse the villagers’ suspicion. It is the year 1955, and the village itself has been wrecked by competition and conflict over land redistribution initiated by the Land Survey, with local political activists acting as brokers. Lutto, the son of an old haveli household servant (khawas), has been particularly successful, more so than the Socialists or the local Communist Party cell. Lutto hates Jittan, and much of the novel is taken up by his conspiratorial designs to foil Jittan’s attempts to reclaim the barren riverside bank for tree plantation and cultivation. Jittan strikes a victory when he produces a copperplate deed, and is delighted when soil testing confirms the indications of the copperplate. Meanwhile, the Kosi Dam Project has laid out a whole camp city nearby, and the villagers are suspicious and hostile to that, too.

Within this village wrecked by factions and personal animosities, only folklore can act as a unifying force. When Jittan asks old Ragghu Ramayani to sing the story of Sunnari Naika, the whole village rushes to listen, including Lutto’s wife, much to his dismay. Malari wins over the suspicious villagers when she sings and organizes the village girls for the festival of sama-chakeva. And the rift between the developmental state, the educated reformer, and the divided village can be healed only by a performance of a play on the Kosi tale that will include the dam project and involve the whole village.

Interwoven with the story of Paranpur is the internal critique of colonialism voiced through the diary of the Englishwoman Rose Wood, found by Jittan’s guest, the folklorist Surpati Rai. The second part of the novel interweaves Jittan’s troubles with the diary, which chronicles Mrs Rose Wood’s arrival in Purnea as estate owner, her distaste for the arrogance of British planters, and increasing love for the Hindi language, Indian culture, and the rogue zamindar Shivendra Mishra, Jittan’s father, who becomes her manager and her lover. In several cringing passages, we read of her enthusiasm as gopi to her dark lord, slave to her master, and loving second wife and stepmother to Jittan. Through her and through the character of Tajmani, the mature servant Jittan’s wise mother charged with looking after him, Renu writes a fantasy of womanhood as overflowing and unconditional love that asks for nothing in return. Malari, by contrast, strikes a more assertive note.

As in Maila Anchal, language is a major part of the pleasure of this novel—whether it is the note about the English words that villagers are using in their ‘pure’ and ‘apabhramsha’ form, the witty repartees among the villagers, the women’s quarrels, the many songs and tales, or the sonorous line by the local playwright. Murari Madhusudan Thakur valiantly attempts to translate them all and provides a glossary and notes for some of the words and references. That such a rich and important novel has been translated is of course a cause for celebration. The cover and printing are attractive, too, though one wonders if any editorial care or revision took place to find solutions to the difficult or obscure passage. And even in the age of Amazon, to get hold of the novel was difficult, indeed impossible outside India.

Other translated works by Renu: