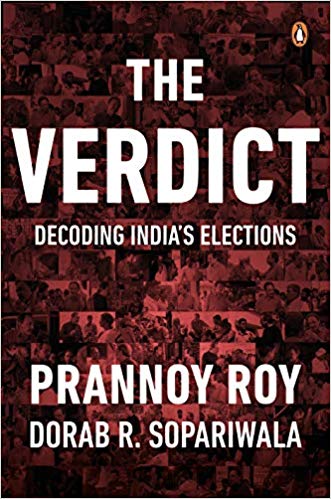 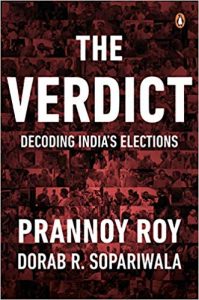 In this timely book, The Verdict: Decoding India’s Elections, India’s original, most popular, and respected pollsters, Prannoy Roy and Dorab R Sopariwala unpack their story of elections in the world’s largest democracy. Spiced with anecdotes from the field and bits of dry humour, this deftly crafted, superbly researched volume presents ‘the characteristics, the experience, and the lessons learned from watching and studying Indian elections over the last seven decades.’

The story is presented in four parts. The first part examines what they call the turning points in India’s elections. Here they focus on issues around three dimensions, anti-incumbency, the woman voter and the signs of greater or deepening democracy. They divide Independent India’s tryst with elections into three phases, which include, the pro-incumbency era (1952-77), the anti-incumbency era (1977-2002) and the fifty-fifty era (2002-19). This threefold demarcation revolving around governmental turnover forms the backbone of their analytical framework. They do not make the mistake of focussing only on the Lok Sabha elections but simultaneously examine Vidhan Sabha elections as well. This is important because States and their politics are often ignored in the routine imagination of Indian politics. At the same time, they also categorize States into three groups, including big, medium, and small-sized based on their representation in the Lok Sabha.

Using a typology of governmental turnover as a marker is an original idea and makes sense from their perspective of understanding the ‘behaviour, motivation and mindset’ of voters as well as mapping the changing relationship between the voter and the politician.The dominant markers in the study of Indian politics currently revolve around party-system change and transformation. It will be interesting to see how governmental turnover helps us understand other dimensions of politics in India.

While it may initially appear that the size of State representation in the Lok Sabha does not matter, towards the end of the book the authors show that it has serious implications for the quality of democracy. Lok Sabha representation is essentially a proxy for population. Since the numbers to the Lok Sabha have been frozen and delimitation has been reduced to an intra-State affair, the authors demonstrate the growing inequality of voters in terms of how much weight each vote has in terms of its contribution to the election of a representative (pp. 246-48). States with larger populations are at a disadvantage compared to those with smaller populations after the freezing.

One of the significant developments in India’s electoral history has been the increasing participation of women. The turnout of women in Lok Sabha elections between 1962 and 2014 has increased by nearly four times compared to men. During the same period, women’s turnout for legislative assembly elections increased by 27% and is now higher than that of men. This increasing participation according to the authors has forced political parties to pay special attention to the issues of women. However, the gap between census figures and the voters’ list shows that nearly 5% of the women, which amounts to around 21 million ‘missing women’, are not on the electoral rolls for the 2019 elections.

As signs of greater democracy in India, the authors flag the declining share of votes received by independents, reduced use of President’s Rule and the end of booth capturing. In the context of the controversy surrounding EVMs, they note that India should be proud of them and it is one of the ‘finest innovations’. From their experience and observations, they believe that the EVMs are ‘tamper and hack-proof’ and offer convincing reasons for their position.

Part two of the book demystifies the world of polling and pollsters and also informs the reader about what to look out for in 2019. They open the section by underlining the challenges for a pollster imposed by heterogeneity in India. These include not only State specific idiosyncrasies, religion, literacy but also universal issues like phrasing, ordering, language, dialect and so on with respect of survey questions.For history and trivia buffs, there is a story of how opinion polls took off in India as well as how the now famous Lahiri-Roy Index of Opposition Unity (IOU) was developed and refined.

The next two chapters in this part are a must read for all those who follow opinion polls. Not surprisingly, Roy and Sopariwala make a strong case for why polls should not be banned. Fake polls according to them are the unintended and obverse effects of the ban. They then help us distinguish between different types of polls and also how to mark out suspect polls. For the disbelievers, who only seem to remember past mistakes and errors in polls, the study examines more than 800 forecast polls over the last four decades. They found that Indian polls had a moderate strike-rate (75%) predicting the winner; though this is much lower compared to average global strike rates. However, if we remove the 2004 elections, the percentage goes up to 97%. Additionally, they also compare different polling agencies and their strike rates for opinion and exit polls.

Furthermore, they also explain why poll forecasts are conservative and tend to underestimate the winners’ seats. Amongst the biggest challenges for forecasting elections in India according to the authors is the tendency to ‘play-safe’ both among the respondents (voters) and the pollsters. From their experience, they note that voters are more likely to reveal ‘real’ choices in a post-poll as compared to a pre-poll. Voters ‘play-safe’ by stating that they will vote for the incumbent and this complicates the pollster’s task.  Similarly, pollsters including the authors also ‘play-safe’ and prefer to get the winner right and err on the seats by using the lower bound of seats as predicted by their statistical models. In conclusion, the pollsters also let you on to the ‘secrets’ of forecasting seats from polls.

In the third part of the book, the authors empower the readers to make their forecasts by identifying a set of predictors and indicators. While there is no definite pattern as to benefits or losses from high and low turnouts, the book offers some tentative findings which require further investigation. A study of the last three general elections revealed that the BJP benefitted in low-turnout constituencies while the Congress was likewise advantaged in high-turnout constituencies.

The Roy-Sopariwala explanation for this turnout-vote relationship deserves attention. They argue that the efficient voter mobilization efforts of cadre-based parties pay off when there is low self-motivation among voters. Consequently, they can get the voter out compared to non-cadre parties, and this gives them a considerable advantage when turnout rates are low. Even after controlling for rural-urban differences as well comparing high and low turnout constituencies their proposition that the BJP does better in low-turnout and the Congress in high-turnout seats held.  Notwithstanding this correlation, they suggest that this relationship requires further probing and research.

Finally, the study of three decades of panchayat and municipal elections reveals that they are an excellent predictor for State assembly elections. The section concludes with two tables which summarize the ‘honeymoon’ time-periods and the relationship between different elections. Other predictors identified by the authors include bellwether constituencies and the so-called ‘bump’ during the counting.

The next two chapters are essentially lessons from the masters and must be read by all those who are excited by exit and opinion polls. The authors first make a distinction between different types of polls and then present a series of cautionary red flags when it comes to using and reading opinion polls. These include issues of transparency, sampling and representation of diversity.

The final part of the book is implicitly in the advice to kings tradition. Based on their long experience in the field, careful observation and rigorous data analysis they attempt to identify the elusive winning ‘mantra’ for elections. They found that rather than popular vote, dividing the opposition brought a higher payoff.

Their data analysis showed that for every 1% swing in votes, the average number of seats won or lost over the last seven decades is 15. However, in the current fifty-fifty phase, it is slightly more with 18 seats being won or lost for every 1% swing in votes. At the same time, the average seats won or lost today for every 1% increase in IOU has almost twice the effect it had in the pro-incumbency period. Swings are challenging to implement as they involve the electorate. Swaying large numbers of the voting population requires greater investment and skill. However, vote pooling is relatively easier since they are primarily leader-based decisions and therefore easier to implement.

Based on these findings, they subtly admonish political parties for ignoring the lessons of vote-pooling which has led to increasing fragmentation of votes and the constant lowering of the ‘winning vote threshold’. However, this advice does not distinguish between the short-term and long-term goals of political parties. Some parties may be willing to play the waiting game and may not want to compromise on their policy and ideological positions to win seats or hold office.

At the end of the book, they summarize their findings and present what can be called a primer of FAQs about Indian elections (pp. 261-77). These thirty-two questions revolve around a wide range of issues, including predictors like turnout, by-elections, State elections, and bellwether constituencies; trivia like ‘bump’, ‘swings’ ‘IOU’ and how to make sense of leads and wins on counting day; explanatory variables like incumbency,  candidate selection and choice, age of voters and elected representatives, women, independents and rural-urban divide; other explanatory factors like elections at multiple levels and State-level verdicts and their aggregation; technology and media dimensions like EVMs, media, opinion polls, online polls, polling agencies and fake polls.

Written in a form accessible to a general audience, it does not burden the reader with complex discussions. The Verdict with its meticulous accuracy will generate greater interest in making sense of voter behaviour and should become the intelligent person’s guide to understanding Indian elections. As elections become more complex and the voter more assertive and sophisticated, the underlying message from Roy and Sopariwala is that those studying and explaining Indian elections need continually develop and sharpen their analytical tools to be at the top of their game.

KK Kailash is with the Department of Political Science, University of Hyderabad.