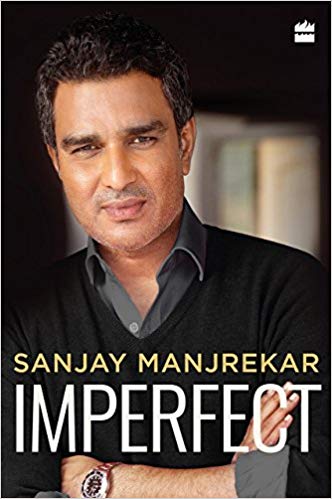 In the annals of Indian cricket writing, autobiographies or authorized biographies of cricketers have tended to be boring and boastful accounts. Former cricketer-turned-commentator Sanjay Manjrekar’s Imperfect is not one of these. It has two essential qualities—honesty and self-criticism. The book’s tonal integrity—especially about sportsmen on their own lives, careers, and their equations with their peers and managers—is rare in Indian sports writing. In a book peppered with anecdotes and some knockout moments from the Indian cricket ring of the 1980s and 1990s, Manjrekar pulls only a few punches.

He begins with a frank account of the fear and distance that marked his relationship with his father, the former Indian Test cricketer Vijay Manjrekar. He describes in detail his father’s frustrations at being unable to adjust to retired life after a full cricketing career.

Manjrekar Senior’s difficult attitude impacts his son, although there are tender moments too. The idea that Manjrekar Junior was destined for a cricketing career is seeded early. However, this was a borrowed ambition; it was the only way he knew to becoming famous. By the end of his career, he wasn’t unhappy with his middling record, for he played mostly in trying conditions, away from the Indian subcontinent, and against fearsome bowling attacks.

There are many things that are endearing about this book: Manjrekar’s regular critical and self-reflexive analyses of his batting weaknesses and temperament problems ; his lavish praise for the Pakistan teams of the 1980s and 1990s, and his unending admiration for Imran Khan’s work ethic and bottom-up captaincy; his support for ‘street-fighter’ style cricketers like Kiran More and Manoj Prabhakar (who he felt would be promoted and empowered if India had an Imran Khan-type captain); his regret and disappointment over the negative attitude and team culture during his time in the Indian dressing rooms; and the layered portrayal of Mohammad Azharuddin as a selfless player, democratic captain open to out-of-the-box suggestions, and a generous human being. These anecdotes enrich the book by subverting received wisdom about Indian cricket and maligned Indian cricketers.

A good number of the frictions that arose in Manjrekar’s cricketing life are issues that have plagued Indian society. The author’s appraisal of his career and the graph of Indian cricket at the time become windows to examine Indian society. He appears to be more at home playing for Bombay than in the Indian team. India’s regional faultlines thread their way into the national and zonal dressing rooms. Some of these are the distrust and rivalry between players from the West Zone (Bombay) and the North Zone (Delhi); the hierarchy in the team, where the ‘seniors’ expected (and received) excessive ‘respect’ from all and sundry; the tendency of some senior Indian players getting ‘injured’ before a series against pacey attacks. These details give context to the regular spinelessness that Indian cricket teams displayed on major tours against the best teams during the 1980s and 1990s.

Despite this rich detail, many questions emerge and remain unanswered or unasked. These are the limitations of an otherwise spry narrative. Manjrekar rues the lack of a leadership culture and team unity (akin to Pakistan under Imran Khan or West Indies under Clive Lloyd and Viv Richards) and contends that this was the reason India performed poorly overseas. To be fair, he underscores some of India’s big One Day Iinternational (ODI) wins at the time. This contradicts his claim about leadership inadequacies in the Indian team. How did India win the 1983 World Cup against the West Indies team (that had beaten them twice earlier in the tournament) without Kapil Dev’s exemplary leadership and India’s team unity? How could they have gone undefeated in the World Championship of Cricket in 1985 in Australia, again without team unity and the acumen of Sunil Gavaskar? Or, even win the Hero Cup in 1993 in tough games against South Africa and West Indies without man-of-the-series Mohammad Azharuddin leading from the front? Manjrekar’s point about leadership is well taken. But Kapil Dev, Sunil Gavaskar, and even Mohammad Azharuddin have displayed exemplary leadership during challenging ODI tournaments that India won.

Manjrekar wears his pride about being a Bombay cricketer on his sleeve. He credits the Bombay maidans for sustaining an ecosystem that produced and protected resilient, canny cricketers. The only time he slights it is when he begins struggling in his career and realizes that he has never been fit enough to play in the large grounds of South Africa and Australia. He is run out frequently and quips that the ‘Bombay school of batting’ taught a batsman the skills but didn’t focus on fitness. That is odd, because during the same period Sachin Tendulkar and Vinod Kambli emerged, and both excelled at fielding, fitness and running between the wickets. Here, Manjrekar impugns his environment more than himself. The picture of Bombay cricket that emerges from Manjrekar’s writing is a batsman-centred world, where most bowlers happen to be medium pacers or spinners. Bombay cricket gave us batsmen but not the one thing that was India’s constant bane: fast bowling (barring the middling Abey Kuruvilla and a bit better than middling, Ajit Agarkar.)

Manjrekar’s love for Bombay and Bombay cricket colours his assessment of cricketers from Delhi and the North Zone. Sometimes, he doesn’t offer basic information. For example, what was the exact reason for the long and painful Bombay/West Zone vs Delhi/North Zone rivalry that bled from local games into the national team dressing room? Were Bombay/West Zone cricketers, managers and officials equally culpable of stoking the fire or was it only Delhi/North Zone’s fault? Manjrekar avoids delving deep here, for he would be forced to be more specific about details, names and incidents.

With respect to match fixing, Manjrekar claims ignorance of what happened, barring one India-Pakistan game in Sharjah in October 1991 that raised suspicions of malpractice. It turned out that the game was severely mismanaged. Later, in 2000, Manjrekar was ‘stung’ by Manoj Prabhakar in his car in Bombay. Manjrekar doesn’t reveal much in the tapes. Although he respected Prabhakar as a cricketer, they hadn’t warmed up to each other as friends. Match-fixing gets the short shrift.

There isn’t much on Vinod Kambli, but Sachin Tendulkar gets humanized in Manjrekar’s portraiture. In his debut series in Pakistan in 1989, the future ‘god of Indian cricket’ doesn’t walk although he gets a faint edge down the leg side. The bowler and the wicket-keeper don’t appeal although Imran Khan at mid-on does. Ergo: ‘Gods’ are mortals too. In 2008, Manjrekar had questioned Tendulkar’s position in the team after a long string of average performances. He received much flak for calling Tendulkar the ‘elephant in the dressing room’. It sparked a furore among Tendulkar fans. Manjrekar is mute on all of this. He makes some general points about the change in position from cricketer to commentator.

In the last chapter, Manjrekar speaks about his marquee moments behind the screen and as cricket anchor. He includes a list of his commentating heroes. He does not include a single Indian, though in earlier chapters he mentions that Navjot Sidhu is a perspicacious reader of the game. There are other telling omissions. For an avowed product of the Bombay school of cricket, what has he made of fellow Bombaywallahs Ravi Shastri and Sunil Gavaskar as commentators? Manjrekar’s keeping mum on these two stalwarts of the game from Bombay—on their commentating—perhaps signals a circling of the wagons, like the Bombay school of batting: there is no straight bat involved here, Manjrekar simply leaves the ball.

A Place for Us by Fatima Farheen Mirza tells the story of one family, but all family life is here. Rafiq and Layla must come to terms with the choices their children have made, while Hadia, Huda and Amar must reconcile their present culture with their parents’ world, treading a path between old and new. And they must all learn how the smallest decisions can lead to the deepest betrayals.