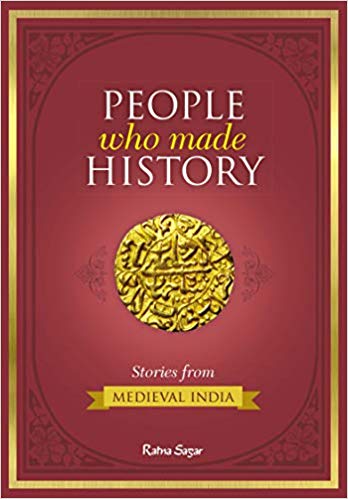 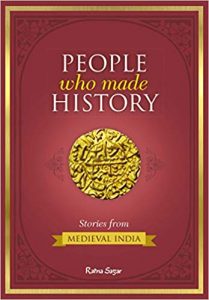 This book is a part of the series on People Who Made History. The series aims at narrating stories from the lives of such historical figures that made a lasting contribution and left behind a glorious legacy whether in politics and governance or political thought and ideology, art and architecture, science, literature, travelogues or any other. The series belongs to the genre of historical fiction that brings alive the historical past by imaginative, creative stories. It is, in other words, a storehouse of stories from Indian history. Each story is accompanied by fine aesthetically done illustrations that enhance the worth of the story and would make it an even more interesting read for children.

The value of the book is its diverse focus on characters ranging from kings and queens to saints, women saints, Sufi Shaikhs. It tells the story of Kothai, adopted daughter of Vishnuchitta and Vrajai. Vishnuchitta was a Vedic scholar and poet known for his hymns to Vishnu. Kothai was later known as Andal —the girl who ruled over the Lord— for her ardent, passionate devotion to Lord Ranganatha, deity of Srirangam, whom she ultimately married in his temple in a grand ceremony. Of the twelve Alvar saints of India who lived between the fifth and the ninth centuries, Andal is the only woman bhakta saint from the Tamil speaking regions. The story on Nizamuddin Auliya is a narration of the rise of the Sufi Shaikh into becoming one of the greatest Sufi saints, popularly called mehboob-i-ilahi or beloved of God, his experiences during the rule of Sultans of Delhi and the legacy that he left behind comprising disciples or murids (not khalifas as said in the story. Khalifa, when translated would mean leader, successor, ruler, vice-regent) like Amir Khusro. Also, it may be worth noting the meaning of Awliya or Auliya i.e., friend of God. The narration on Kabir is a tale of his evolution from a weaver to a spiritual sage and poet, whose vanis and dohas attracted both Hindus and Muslims. It is a story of syncretism, composite culture, community union, and togetherness of Hindus and Muslims. The description of the early life of Dara Shukoh, the Mughal Prince and son of Shahjahan and Mumtaz Mahal, is quite imaginary, perhaps a little too distant from historical facts as we understand them but then as the authors observe in the ‘Introduction’, the ‘central facts of the story are provable. Notwithstanding the details of his personal experiences, sentiments and emotions, the story as intended, though briefly, portrays Dara Shukoh as different from his brothers with a bent towards intellectualism, syncretism and love for books.

The stories on kings and queens who ruled India at different points of time either from Delhi or any region are interesting and should certainly arouse the creative, inquisitive minds of the children. The simple and conversational style of depicting the rulers—whether it is the events that led to the enslavement of Qutubuddin Aibak or his rise as Sultan, the bravado and statesmanship of Raziya Sultan and Rani Durgawati, political assertiveness and ambitions of Nur Jahan, Shahjahan’s coronation and his forlorn state subsequent to the death of Mumtaz Mahal, the power of Prithviraj Chauhan, Shivaji and Chaolung Sukapha—makes them alive and should definitely nudge the children to investigate and ask for more. The inclusion of Chaolung Sukapha in the book is good planning. It takes away the glare from Delhi and such rulers who are already much known. Sukapha was the first Ahom king. He is acknowledged as the first Assamese who brought together the various tribes of Assam to form the Ahom kingdom. Assam day is celebrated on December 2, also a day when the people of Assam remember Sukapha.

Another significant aspect of the book is the interspersed brief description of a book comprising Indian folk-tales, a region, a personality and a style of art. All these make the book diverse and multifarious, catering to children with different talents and interests. The entry on Kathasaritsagar authored by Somadeva, a Kashmiri poet and writer would transport the children into the eleventh century by its tales and legends. Similar and yet different from Panchtantra (that narrates stories of animals), Kathsaritsagar is a compilation of stories of kings and queens, gods and demons, love and adventure that relates the life and social customs of the time. It was translated into English by Charles Henry Tawney, published in 1880 and 1884 in two volumes as The Ocean of Story. The description of Charaideo Maidam (maidam means tomb in Assamese), a complex of burial vaults of the Ahom kings is found in the district of Charaideo, the north-eastern State of Assam. It was in Charaideo that the first capital of the Ahom king was established by Chaolung Sukapha, the founder of the Ahom dynasty. Charaideo Maidam is an evidence of the architectural acumen, craftsmanship and skilled masonry of medieval Assam although most of these maidams are in ruins except 30 of them that are protected by the Archaeological Survey of India and the Assam State Archaeology Department.

The entry on Vasco Da Gama is perhaps influenced by the fact that he was the first European to arrive in India by sea. A Portuguese, he made several voyages to India that opened up the sea route between Europe and Asia and expanded trade relations between India and Europe breaking the monopoly of Arab traders in India. The style of art that the book includes is parchinkari, the art of inlay work that developed in India during the Mughal period in the sixteenth and the seventeenth centuries and continues to survive as a popular art form and craftsmanship.

The book, beautifully and mindfully illustrated, cogently and lucidly written, should certainly invigorate the minds of children. It portrays the syncretism, composite culture, literary and architectural values of the medieval period in India. A book meant for children and intended to shape the thoughts and attitudes of children ought to have a discreet introduction. To begin by saying that ‘the medieval period in Indian history was a …strife-ridden one…there was a lot of fighting and bloodshed…there was much violence in the period’ or to suggest that the building material of 27 temples was used in the construction of Quwwat-ul-Islam mosque without any explanation conveys a biased and an unfair assessment of the period. The stories in the book, however, to its credit, adhere to none of the qualifications stated in the ‘Introduction’; they appear to be quite a balanced telling of the characters and characteristics of the medieval period in Indian history. Children, indeed, will not only learn and widen their horizons but also enjoy the stories and love the drawings.

Meena Bhargava is Associate Professor in the Department of History, Indraprastha College for Women, University of Delhi, Delhi.