Mysteries Of Love And Its Perils 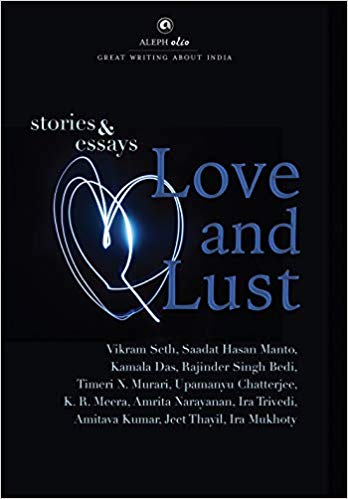 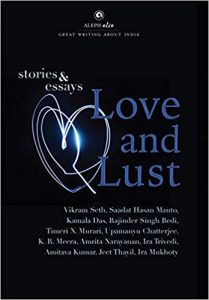 Imagine miniature vials of premium perfume curated by a well-known and trusted brand and aesthetically packaged and gift wrapped. Now replace those vials with slices of literary works by some of India’s well known writers enclosed in a hardbound book with a jacket that spells sophistication, stamped with the logo of a publisher that constantly strives to break new ground, and voila! There you have it! Love and Lust: Stories and Essays from Aleph’s Olio series.

It’s a slim, sleek volume. The first page of each section is black with reverse typography, providing a visual extension of the volume’s theme. However, with regard to Love and Lust, it is really a matter of individual reader taste. In all likelihood, this collection of miscellaneous literary offerings by famous Indian literary names on the eternally popular subject of sex and its peripheral emotions will appeal to the haughty bibliophile. It is a book for modulated conversations, among fine china, on languid afternoons.

Love And Lust appropriately begins with an excerpt from Vikram Seth’s tome of a book, A Suitable Boy. Seth’s elegant prose belies the turmoil of emotions within. Those who have read his book will enjoy reliving this storm in a little domestic tea cup. Saadat Hasan Manto’s lust-soaked ‘Tang’ follows as if on cue, thrusting forward a narrative that is literally on the other side of the social spectrum. Manto’s hard hitting and sensuous prose leaves behind a lingering odour, both agreeable and foul, from a low caste woman, a ghatam, who is invited to spend the night in a rich playboy’s bedroom. In ‘A Little Kitten’, Kamala Das deals a light and subtle touch to the hackneyed theme of the confined and neglected wife. The twist at the end of the story is predictable, but Das’s poetic style makes it worth reading.

Rajinder Singh Bedi’s story ‘Laajwanti’, translated from the original Urdu by Mohammed Umar Memon, is set during the Partition of India and Pakistan. Written in straightforward prose, this powerful narrative recreates the private traumas of abducted women and their families, through the lives of Babu Sunder Lal and his wife Laajwanti. Each of them tries to come to terms with the tragedy, and the havoc caused, even as they try to be rehabilitated and rehabilitate at the same time. Bedi’s story is not so much about lust as it is about loss. Though the physical implications of abduction remain mute in the story, they cast deep shadows. With simple words Bedi transports the sense of loss across to the reader, across culture, geography and demonstrates love’s resilience, even as the object of love is both rehabilitated and ruined.

Timeri N Murari’s story ‘Taj’ takes the reader on a quick time machine trip to Shah Jahan’s boyhood. The setting is a pop-up market—the Royal Meena Bazaar—in the palace grounds, where stalls have been set up to sell a wide assortment of wares, and women are allowed to walk unveiled and free to be as promiscuous as they please. Murari paints a meticulous scene, walking the reader through the melee, privy to the youthful Shah Jahan’s private thoughts. Unfortunately Murari’s voice does not ring true. Worse, it runs through the same old Mughal tropes of exotica. The story, devoid of plot, quickly becomes lifeless, and falls flat. This was disappointing, as Murari is a respected writer, known to write with seriousness and sensitivity. The Mughal era gets another mention in the volume. Ira Mukhoty’s ‘Dildar Begum and a Marriage Proposal’, is an excerpt from her book Daughters of the Sun. It’s a mere glimpse of one of Indian history’s uncharted aspects—the role that Mughal women played in establishing their empire; but packed with enough meat to make one wish to get to the entire book.

Jeet Thayil’s excerpt from his novel of the same name, ‘The Book of Chocolate Saints’ describes a native returned to the soil’s sojourn in Delhi with sensory precision. Right down to the crotch scratching guard at the Delhi fort. Thayil’s prose creates the kind of physicality in which one can smell the sweat and feel the need for a cold drink…air conditioning…silence and a nap in a dark room. Likewise with Upamanyu Chatterjee’s ‘Desolation, Lust’, which takes the reader on an undulating dusty journey into the era before cell phones and the internet, when important messages were sent through telegrams, trains were the most common mode of travel, and second class compartments were meant for the educated Indian middle class. Chatterjee’s urban middle class protagonists are not idealistic lovers. Theirs is a sultry sweaty kind of passion. When it ends there are no fireworks. There is just that damp spot of hopelessness praying for the decline of all desire. Chatterjee’s prose lifts up the narrative with cinematic ease.

KR Meera’s ‘The Deepest Blue’, trans-lated from Malayalam by JR Devika is a first person narrative of a woman’s love that crosses over from one life to the next. In layered surreal prose, Meera’s protagonist, a well-to-do married woman in this life, seeks out her paramour, propelled by the vision of a house.

The pièce de résistance in the collection however, is Amrita Narayanan’s story ‘Stolen’. Lushly narrated, ‘Stolen’ is an afternoon raga of pure desire and its fulfilment. Unabashedly erotic, the story revolves around three maids and the mistress. This story could be a voyeur’s fantasy or shock a prude into a frowning pursed-lipped silence. One can be repelled or aroused, but one cannot shake off its grip. Immediately after however, the reader gets a bucket of cold water from the next, an essay by Ira Trivedi. ‘Love Revolution’ by Trivedi is as pedantic as it is a tediously long and hackneyed account of couplings in the Indian context. Thankfully we have Amitava Kumar to fall back on. ‘The Lovers’ is a short piece, an extract from the book of the same name. Kumar’s controlled almost sotto voce prose brings out the humour and pathos of inexperienced, unfulfilled and gauche young men as smoothly as his Dr. Watsa delivers responses to sexual queries. My immediate reaction after reading the extract was to order my copy of Kumar’s book.

Hits and misses are part of the deal in any assorted collection. Love and Lust is no exception. As Imtiaz Dharkar says in her poem ‘Objects’, desire can be a delicate thing. It follows therefore that any literature on the subject will have an element of fragility. Narratives on desire and its objects can be difficult to handle. Most of the pieces however, do stand out in a way that make re-readings a pleasant possibility. This glossy black volume, this Olio, is quite capable of turning ordinary browsers at a store into curios bibliophiles, hobbyists who enjoy gathering and perusing through their bits and bobs of literary picks.

Shikhandin is the author of Immoderate Men (Speaking Tiger) and Vibhuti Cat (Duckbill Books). His fiction and poetry have received awards and accolades in India and abroad.