Negotiating Normalcy: Me Hijra, Me Celebrity 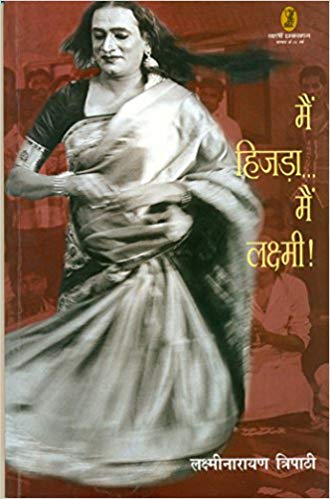 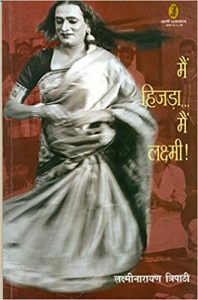 While queer theory and practice is a new field of study in India, the form of autobiography, biography, and memoir has come up as a powerful tool for LGBTQIA+ authors. Apart from Tripathi’s Main Hijra… Main Laxmi!, there are books like The Truth About Me by A Revathi, A Gift of Goddess Lakshmi by Manobi Bandhopadhyay, the first transgender principal of a college and Red Lipstick: The Men in My Life by Laxminarayan Tripathi and Pooja Pandey. Much like the Dalit autobiographies, these books by LGBTQIA+ individuals offer us for the very first time, a glimpse into the lives of those who live on the fringes of the society.

Main Hijra… Main Laxmi!  is the autobiography of one of the most famous hijra figures in India, Laxminarayan Tripathi. Laxmi has been in the public eye for quite a while, being part of reality TV shows like Bigg Boss and Sach ka Saamna. She also participates in news debates on LGBTQIA+ issues. She is an activist and performer working towards the sexual health and well being of the hijra community in India. The title of the autobiography makes one think about the assertion of identity through the word ‘hijra’, coming before the name of the individual. However, one finds the assertion to be more prominently present in the title rather than the narration. The book turns out to be more the story of an individual’s struggle with identity and relationships than the celebration of ‘hijrahood’. The narrative seems to be obsessing over the selfhood and accomplishments of someone who happens to be a hijra.

The book has actually been written in Marathi by Vaishali Rode who, in her introduction notes how Laxmi narrated the events to her, and she would write them down only after she returned home. This makes the authenticity of the narration questionable. One also wonders about the loss that would have taken place between the narration and the writing down of it all by Rode. Undeniably, Rode’s version of the story must have crept into the narrative, unknown even to Rode herself. While narrating the events of her life, Laxmi is often hesitant (as per the introduction by Rode), to plunge straight into the recall. Once again, one is left wondering how much of the life story has been manipulated while telling it. This remark of Rode’s dilutes the transparency, which is otherwise regarded as an indispensable part of autobiographies.

The book narrates the ups and downs of Laxmi’s journey through life, and how she made peace with the identity of being a hijra. She narrates the physical abuses that she faced in childhood and explains how it shaped her as a person. Those who befriended her during her struggles are given a fair mention. Laxmi discusses her various love affairs and the heartbreaks and disappointments she faced. However, one can sense a lack of willingness to share all, a hesitation to open up without any restraint—e.g., the problems that come along with the decision of joining the hijra community, and her disagreements with Lata guru. Laxmi is keen to discuss her public life and talks glowingly about her achievements at the international level.

Being an account of a boy’s life that doesn’t feel like one, the book doesn’t measure up to our expectations—in the sense that the story falters and wavers, giving in to contradictions. One instance is that of a very significant aspect of anyone’s life, the love and support of one’s parents. Laxmi asserts that she is lucky to have found the support of her parents in her journey into a new gender identity but takes pride in talking about how she always dressed up as a man for the sake of her parents’ happiness and social image. There is a sordid description of her mother wailing and beating at her chest when Laxminarayan comes home for the first time after revealing her sexual orientation. Her parents urge her to give up her hijra persona and just remain a dancer. They even offer her money to start a business of her own and plead with her to be mindful of the honour of the family. Laxmi also talks about avoiding going out with her parents so as to not embarrass them by her hijra identity. While there is nothing wrong in confessing that one faced opposition from one’s family on the question of revealing one’s gender identity, what doesn’t seem believable is the claim that Laxmi is an achiever in life largely due to the fact that she is a rare example of being a well-bred hijra who enjoyed the full support of her family. She is educated and can speak English too.

Talking about Judith Butler’s theory of the performance of gender it provides an interesting lens through which we can view Laxmi’s narration of her life story in which she performs a man’s role when inside her house, or with her family, but the moment she crosses the boundaries of her house, she transforms, read performs, like a woman. Butler’s postulation that performance adheres to socially constructed gender roles comes true in Laxminarayan Tripathi, the hijra’s case, as Laxmi is seen adapting her performance to what suits her concerned physical space. In this way, she negates the trans-existence of a person, acting both like a woman and a man, in accordance with her needs. She also points out differences of performance between her and other hijras. Laxmi doesn’t display a full-fledged sense of belonging with the hijra community, disappointing the reader, who might have been looking for a celebration of the hijra way of life.  It is not clear what Laxmi means by the ‘normalcy’ she talks about. If normalcy to her is playing the dual role of men as well as women, then the trans-identity itself becomes questionable.

At another instance in the book, Laxmi expresses distaste for other members. She expresses shock over the identity of Chris, who is a trans man, a woman by birth who transitioned into a man. She notes how it took her two days to make peace with the fact that a woman can have a desire to be a man. This contradicts her own experience of being stuck inside a man’s body with a woman’s feelings. Laxminarayan Tripathi doesn’t open up to the idea of gender dysphoria, despite facing it herself.

The narrative in the book skips and rewinds whenever it pleases. One moment, she is talking about her teenage and at another, she begins discussing her achievements at international events and then swings back to her childhood again.

The title of the book sets up the expectation that it would shed some light on the community and the internal politics that plays out within a hierarchical structure. However, except for a few instances, like when Laxmi narrates her problems with Lata guru and the way the community works while inducting a new member, there’s hardly any information on the intricacies of how this community works. The book is more about how the community treated her and not about the community itself.

The last twenty pages of the book are dedicated to information on transgender, eunuchs and the LGBT community, which contextualizes the differences between the western idea of transgender and the Indian idea of hijra. However, a reader might feel underwhelmed by this as it comes just after the climax of the personal narration. Perhaps putting the information section at the beginning could have introduced readers to terminologies and details of LGBTQIA+ community and helped understand Laxmi’s journey better.

Laxmi is a popular figure in the media and culture. What could be the reason for this popularity? She asserts during the narration that she wanted to behave ‘normally’ in the reality shows she participated in because she wants others to see how normal transgenders are and also increase the visibility of the community in popular media. But, perhaps, the reason for the popularity that she gained is the way the hetero-normative society looks at her. She comes off like any other person and one often compares her to other hijras, who are presumed to be loud, in-your face and so on. Finally, performing the normalcy disenfranchizes the idea of a trans-identity. It tries to fit the transgender inside the binary of genders and doesn’t do much to change the perception of hijras in India. The book might be an interesting tale of Laxmi’s struggles as a hijra individual, but it does not tell any relevant tales of the hijra community.

Baran Farooqi is Professor in the Department of English, Jamia Millia Islamia, New Delhi. Her areas of interest are Shakespearean drama, Women’s Studies and Translation Studies.