Of Home And The World In Times of War 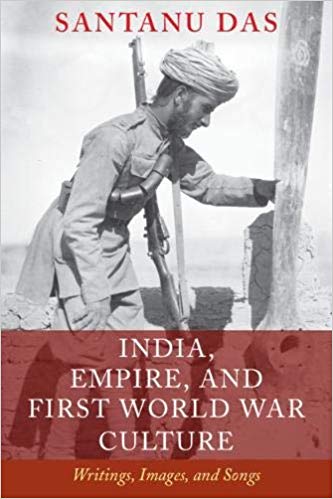 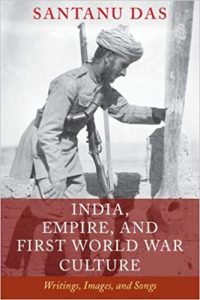 So much has already been written on the history of the First World War—its cause, spread and consequences—that an addition to the corpus of existing literature, expanded substantially in the last few years on the occasion of the war’s centenary, is unlikely to cause much of a stir. Yet the book by Santanu Das that seeks to be ‘the first cultural and literary history of India and the First World War, though it necessarily engages with the social and the political’ has turned out to be a definitive exercise that enriches our understanding like few others before.

Santanu Das, educated in Kolkata and Cambridge, is Professor of Modern Literature and Culture, University of Oxford, and currently a Senior Research Fellow at All Souls College there. As an established authority in this field, he has woven a text in which original research and survey of relevant literature have been infused with much insight and empathy.

How much, in concrete terms, has been India’s contribution to Britain’s war effort? What were the motivations for our colonized country to give its best? While India was dragged into the war without any discussion with its leaders, how is it that leaders like Tilak and Gandhi involved themselves in the process of recruitment of sepoys and others? Most importantly, what indelible impact has our engagement with the war made on the literature, painting, photography and other art-forms both in India and Europe? These are some of the issues addressed in this book. Now that a century has elapsed, it has been possible for scholars like Das to make nuanced analyses of such issues.

To start with the magnitude of India’s help, ‘Between August 1914 and December 1919, India recruited for purposes of war 877,068 combatants and 563,369 non-combatants, making a total of 1,440,437; in addition, there were an estimated 239,561 (Indian) men in the British Indian army at the outbreak of the war. Of them, 1,096,013 Indians… served overseas… in places as diverse as France and Flanders, Mesopotamia, East Africa, Gallipoli, Egypt and Palestine, Salonika, Aden, Persia and Central Asia… Between 50,000 to 70,000 of these men were killed.’ Meanwhile, ‘vast sums of money flowed from the 700-odd native princes… from contributions of over 50 lakhs of rupees… to 5 lakhs of rupees… for the purchase of aeroplanes for the Royal Flying Corps… There were also interest-free loans in addition to offers of… hospital ships, ambulances, motorcars, flotillas, horses, materials, food and clothes…’

Virtually, every Indian, high and low, appears to have supported the Allied cause in 1914. Prayers for British victory were offered in temples, mosques and gurudwaras. Special pujas were organized and a noted astrologer predicted that Golak Jog—the alignment of five planets via the Sun would ensure ‘His Imperial Majesty’s decisive victory’. It was also hoped this show of loyalty would erase ‘the invidious distinction’ between Indians and Europeans.

As Das shows, at the end of the war ‘Punjab had contributed one-third of all the Indian recruits and over 40% of the total number of Indian combatants mobilised.’ As such, the war’s impact on Punjab’s society and culture was substantial. What were the incentives, what motivated ordinary men to join the war in far-off lands? Was it to protect the izzat of the Empire, a call of bravery or just monetary inducement? How were the women reacting? While the initial enthusiasm waned after reports from battlefields started reaching the villages, 1917-1918 was marked by coercion, resistance and reprisals. How were such ambivalence and dissent articulated through the means of music and literature? These and related questions have been discussed threadbare in the relevant chapters.

The book is divided into four parts: ‘The Restless Home Front’, ‘Race And Representation’, ‘The Sepoy Heart’ and ‘Literary And Intellectual Cultures’—further subdivided into ten chapters. These chapters are followed by an Afterword: ‘The Colours and Contours of War Memory’. Each of the chapters is replete with details that enrich the narrative. For example, alluding to the fighting qualities of the Gurkhas with their kukri, a lurid account is quoted from the pages of The Bystander with a full-length cartoon of a British Tommy in conversation with an elegant society hostess:

The West’s fascination with the exotic Indian sepoys—their physicality, manners and customs—manifested itself in myriad ways and this cultural exposure and exchange has been of abiding interest all over, inspiring a torrent of sketches, paintings, photographs and even films. Das captures this phenomenon with a keen eye and understanding and he delves deep into the motives—different as they were—behind such spurts in creativity.

As observed perceptively, ‘If a previous generation of scholars looked at the British Indian army as “sentinels of the Raj”, scholars now have started examining how it became a site of chronic malaise and insecurity for the British imperial establishment.’ This sense of unease marked British attitude to India’s participation in the war. British war writing, Das argues, ‘provides the space for the articulation of the fear of the imperial body being possibly “infected”, as well as for the inoculation against such fear through the injection of a strong dose of narrative “antibiotic”.’

Das also takes us through the substantial literature outside the world of sepoys. Kalyan-Pradip is a 429-page memoir in Bengali, written by an eighty-year old widow whose grandson, Kalyan Mukherji of the Indian Medical Service, died as a POW in Mesopotamia in 1917. This is a moving testimony of how the campaign there was being perceived in colonial Calcutta. Sisir Prasad Sarbadhikari’s Abhi Le Baghdad, a memoir sui generis, according to Das, ‘is possibly the most powerful and sustained piece of Indian life-writing to have emerged so far from the war.’ Many other accounts have been treated with deserving care.

Kazi Nazrul Islam (1899-1976) was a major poet (later christened as the National Poet of Bangladesh) who had served as Havildar during the war. He is credited to have introduced to Bengali poetry ‘martial imagery and rhythms’ and also ‘Persian and Arabic words and tunes he had picked up in the cantonment.’ His revolutionary fervour influenced the course of Bengali poetry. Similarly, Vadda Jung Europe by Nand Singh Havaldar, running to 2000 lines, has been described as ‘the most compendious and elaborate poetic record of the South Asian experience of the First World War’ with unmatched historical importance. Chandradhar Sharma Guleri’s Usne Kaha Tha (1915) is an early specimen of this genre of literature in Hindi. Mulk Raj Anand’s novel Across the Black Waters (1940) has been termed by Das as the most powerful of ‘all the literary engagements with the Indian war exercise.’ The war-related elite verse of Tagore or Sarojini Naidu, however, belongs to a different genre.

How the war was perceived by Aurobindo, Iqbal and Tagore and what they thought about the future post-war international scenario have been treated by Das in a separate chapter. After visiting the battlefields of the West, Tagore wrote, ‘The awful calm of desolation, which still wore wrinkles of pain—death-struggles stiffened into ugly ridges—brought before my mind the vision of a huge demon, which had no shape, no meaning, yet had two arms that could strike and break and tear, a gaping mouth that could devour, and bulging brains that could conspire and plan…’

In one of his famous lectures on ‘Nationalism’ delivered in Japan (and then the USA), Tagore cautioned, ‘The political civilisation which has sprung up from the soil of Europe [and] is overrunning the whole world like some prolific weed, is based on exclusiveness. It is always watchful to keep at bay the aliens or to exterminate them. It is carnivorous and cannibalistic in its tendencies, it feeds upon the resources of other peoples and tries to swallow their whole future…’

As Das records an iconic incident of war literature, Wilfred Owen (poet-soldier) quoted the following lines from a Tagore poem at the time he took leave of his mother and left for France, never to return again:

When I go from hence, let this be my parting word

That what I have seen is unsurpassable.

This scholarly work by Das will be treated as an authoritative account on the subject for years to come. The telling sketches, photographs and the detailed references have all added value to this tome. Since the subject is of popular interest, I would recommend that an abridged version, say in about 200-250 pages, be brought out for the common reader that could be translated into various Indian languages for wider access and dissemination.

Amitabha Bhattacharya, an engineer by education and a retired member of the IAS, has served in the erstwhile Planning Commission as Principal Adviser in charge of Education and Culture, and with UNDP, New Delhi. He now writes mostly on public affairs in national dailies.