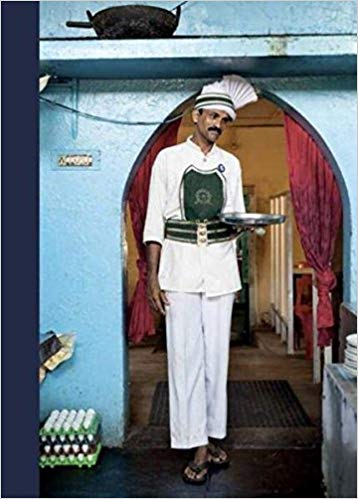 I consider myself a lucky person to have grown up in one of those rare towns of    North India where the Indian Coffee House survives and flourishes. The Indian Coffee House, which is a worker run cooperative, still functions in about twenty cities of India and has most of its branches in the State of Kerala.

This beautifully presented photo book is a tribute to this institution, which in the post-Independence years had come to symbolize the austere leisure space of the thinking Indian. Not only this, its emergence as an institution that snatched its administration from its owners, who first, were British, and then an Indian elite, itself is a story of India’s emergence from colonial rule looking towards Nehruvian socialism. The culture of these Coffee Houses came to signify a certain urban Indian attitude that was looking at postcolonial optimism.

The Indian Coffee House became a hub for people who were engaged in intellectual, political and creative activities. Here they would spend hours discussing ideas. Others too came, some to just loiter away time, others to fall in love, or to entertain their families.

Stuart Freedman, a British photographer who came to live in Delhi in the 1990s, took to the Coffee House culture like fish to water. Having grown up in the 1970s in a working class area of London, the Indian Coffee House reminded him of the cafes in his neighbourhood which spawned the counter- cultural revolution of the 1950s and 60s in England.

Documentary photography in India has moved on from the street photography mode. Gone are the days when photographers from the West used to be enamoured by the street life of India, especially in cities like Kolkata and Banaras, and used to do long photo essays for primarily a western audience, depicting chaos, poverty and spirituality. Here, a person like Stuart Freedman, instead of looking for something exotic and unique, searches for similarity across cultures, succeeds in giving a universal appeal to his photos where audience across continents may identify with a life that looks mundane and dusty on the surface, but a closer reading evokes similarities that are prevalent everywhere and have a deeper resonance.

It is heartening to note that a book of more than hundred photographs traverses the geography of India from Shimla, Chandigarh, and Delhi in the North to Chennai, Kottayam, and Thiruvanantha-puram in the South, and along its path it pays tributes to the Indian Coffee Houses located in places like Jaipur, Nagpur, Allahabad and Kolkata. Flipping through the pictures, one is immediately struck by the prominence given to its work force that sustains the establishment. The first photograph, a two page spread, is a morning shot with the warm sunlight entering the yet to open Coffee House. A worker in his khaki attire is cleaning the floor with a broom. His shadow is nicely falling on the green surface of the wall, along with that of a half open shutter. The picture almost speaks to you, saying that in a few moments the entrance shall be bustling with the daily visitors. The photographer is conscious that the worker, be it the bearer, the cleaner or the cook in the kitchen, is the primary hallmark of this institution. His human interest has a holistic approach that gives us a peep into the lives of these workers. Most prominent is the bearer’s typical headgear and livery that for years had become synonymous with the Indian Coffee House and perhaps is the only surviving vestige from the Raj era. The cover photograph is one such picture where the rubber slippers in his feet paradoxically jar the grace of his costume; a reminder perhaps that today we live in more egalitarian times. A tray full of eggs on the floor and a huge cooking cauldron, suspended on the top of the frame. This is quintessentially the Coffee House atmosphere, where the photographer catches the garishly coloured walls and its uneven texture. In some frames, families are being served; in others, a lonesome visitor is enjoying a solitary smoke and in another, just sitting idle. Behind the scenes kitchen bustle is captured with the pouring of coffee from a large kettle’s snout, to multiple slices of bread being toasted on a large pan ostensibly to make the popular butter toast snack. South Indian savouries like dosa, vada and upma in preparation at an industrial level again focus on the workers dedication, be it the portrait of a man chopping vast amounts of onions or another flipping the dosa in midair.

Being located in Delhi, the author of these pictures has shown favour to the Indian Coffee House situated here, which seems to be his stepping-stone and inspiration to embark on this photographic journey. He also reflects this in the conclusion of the book where there is an insightful essay by him, which draws mostly from his experiences of encountering people and learning more about this institution, its political and social journey by interacting with its many experienced regulars. We see images of some of these regulars in the pictures, be it the Sardarji on the open terrace reading the newspaper and perhaps waiting for a friend to discuss the day’s issues, or Mr. Ram Shastri, the graceful long white-bearded gentleman with his stationary spread in front of him, who uses this space to send petitions to Ministers. Monkeys strolling in the background in Delhi is a common feature as we are reminded that the location of this Coffee House is close to the famous Hanuman Mandir.

Though people may be the primary interest of the photographer and one gets ample evidence of this as there is a section dedicated to headshots of half a dozen workers, yet one cannot be distracted by the stillness of the many people-less pictures. The close up of an old metal chair’s rusted leg or the tattered seat of a rexine sofa, or a dented tray with a splash of water, many such shots are deeply evocative of the time that all such Coffee Houses and their paraphernalia must have seen, thus reminding us that in a way, such imperfections are the bearers of a history. This is most aptly put forth in a deeply meditative short essay written as an introduction to the book by the famous literary critic Amit Chaudhuri.

The use of a wide-angle lens allows the viewer to ruminate on the incidentals all over the frame, be it any of the kitchens or in the grand space and chaos of what was once known as Albert Hall, but later became the Kolkata Coffee House. The uniqueness of this Coffee House, which to most has come to signify the heart of the ‘Adda’ culture of the Bhadralok Bengali is given due significance, a two page spread of just files which may be the record of all the sales of over a century make you inhale a heady brew of old paper mixed with coffee.

The photographer compels us to think about distinct aesthetics across India in many ways. The architecture from inside as well as outside of the Thiruvananthapuram Coffee House, its spiral structure and jagged windows bathed in terracotta colours is just one example.

As the world tilts towards the visual, photo books are the new trend in photography and with the support of galleries as well as publishers who understand this trend, photographers will get more opportunities. This augurs well for the serious photographer whose eye is in search of a new poetic language as is the case with Stuart Freedman.

Love and Learning Under the Magnolia by Bulbul Sharma is a witty love story that captures the friction in a clash of cultures with surprising deftness and lightness of touch. Set in a part of India still unspoilt by urbanization, painter and writer Bulbul Sharma weaves an entrancing tale of self-discovery.