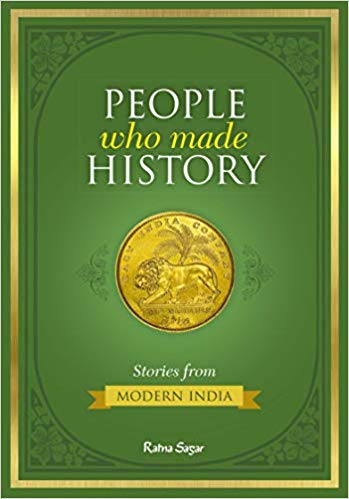 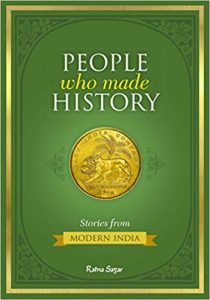 This little book has an unobtrusive cover–a green background with an East India Company coin signifying the advent of colonialism and the modern era. It is perhaps too plain and may fail to attract attention, which will be a pity. A glance at the contents may confirm the first impression—a book for children about ‘great men’ (a few women also) and really do we want another well- meaning, meliorative text which will turn children into obedient, submissive and good citizens of India?

But Nilima Sinha, Nita Berry and Neera Jain have defied the norm and written an amazing text. They have chosen fifteen from the nationalist pantheon but individuals who challenged stereotypes. Some were fiercely independent, courageous, stubborn and rebellious, taking on the colonial state or patriarchy—Birsa Munda and Kasturba Gandhi for instance. Elites who foresaw an India that was sophisticated, modern and industrial—Jamsetji Tata and Chittaranjan Das. Individuals in traditional roles whom circumstances elevated to dizzying heights of leadership—Bahadur Shah Zafar, Rani Chennamma, Begum Hazrat Mahal. Talented individuals who were trailblazers in their field—Raja Ravi Verma and Dhyan Chand. Reformists and writers who rejected caste and tradition—Vidyasagar and Subramania Bharati.

The authors focus on an event or episode in the life of individuals. The stories are compellingly written–the interest never flags. The fictional dialogue between historical characters is a narrative device which is compensated by the attention to historical detail that is very impressive. How many know that Vidyasagar appealed to Nawab Wajid Ali Shah (forced into exile in Calcutta) for funds to start a university? That Begum Hazrat Mahal was offered a pension after the Mutiny by the British which she rejected? The ‘Indian’ flag that Dhyan Chand carried in the 1936 Berlin Olympics was an Union Jack with an emblem of India with the British crown on the top? Details like this make the story complex and interesting.

Seemingly unconnected to the text are two-page inserts on significant developments that marked the advent of modernity—print cultures, cinema, the metropolis. This is a nice touch. Hopefully the authors are planning many other books in this series—one will look forward to it.