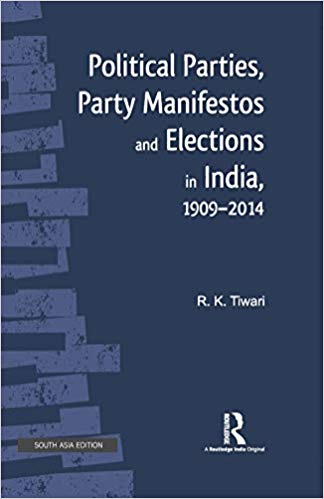 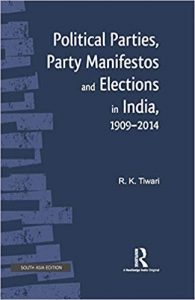 There have been few academic studies that factor in election manifestos political parties frame, put out and follow once the elections are over in India. Large or small, parties frame a list of their intent, should they come to power, or share power (significant in the era of coalition politics), to be shaped as public policies to attract voters to give them their mandate.  One earlier such study is by OP Sharma, ‘Economic Issues in Electoral Arena: Party Programmes and the Politics of Development’, in Ajay K Mehra (ed.), Emerging Trends in Indian Politics: The Fifteenth General Election.  However, seldom, if ever, during or after the completion of their term in power, parties or governments account for the promises made in their manifestos.  This study is thus among the very few that factors in party manifestos to understand political parties and elections in India.  It has quite a broad time canvas of over a century.

While the Introduction and Conclusion are short, the four  chapters of the book are unevenly long that make it difficult to consistently retain the focus of the discussion. ‘Evolution of Ideas on Nation Building and Economic Modernization’ summarizes the views of prominent leaders of the Independence Movement such as Raja Rammohan Roy, Dadabhai Naoroji, Mahadev Govind Ranade, Romesh Chander Dutt, Gopal Krishna Gokhale, Mahatma Gandhi, Subhash Chandra Bose and Jawaharlal Nehru. While discussing this, the author suddenly begins a discussion on the National Planning Committee, the Bombay Plan, People’s Plan, Gandhian Plan and Mahatma Gandhi’s Constructive Plan.  These make the chapter uneven within, diffusing its focus, and without a context for the volume. The latter parts of the volume have no linkages with Chapter 1. Chapter 2 has another contradiction. The heading at the top says 2, but  following the title of the chapter, discussion precedes another heading that says Chapter 3. Thus there are copy editing, proof reading and printing errors galore in the volume.

Such inconsistencies and errors apart, the volume  presents a diligent research by the author to document and analyse the evolution of representative politics, political parties, electoral processes and the significance of party manifestos in appeals for mandate.  What emerges is a fascinating history of how the process of elections evolved in India from colonial days, and the interrelation of political parties, party manifestos and elections with the help of the roots of the Indian democracy going back to colonial days.  Political parties as voluntary associations and formalized organizations with dynamic institutional processes, or even a lack of these, are a significant part of democratic systems and practices across the world.  Their dynamism though is not completed only with, rather it is complemented with, elections that set in motion processes of political competition amongst the contesting parties and leaders.  The dynamics of political competition is further accelerated with the manifestos the parties put out to attract the voters.  The study significantly highlights these with its historical analysis.

Since the second term of Indira Gandhi’s Prime Ministership, when the likes of AR Antulay and Vasant Sathe set in motion a debate on the possibility of switching over to the presidential system, even though the Swaran Singh Committee (1976) had argued that the parliamentary system was best suited for the country, this question has emerged from time to time.This study, however, shows that the parliamentary system in the country began evolving with each step since the late nineteenth century (the Indian Councils Act 1892) in giving select Indians representation and a limited electoral system began evolving that successively inculcated democratic spirit in the country and nurtured civic experience in the exercise of citizen’s rights.

This was reflected not only in the emergence of the Indian National Congress as a political association that began articulating the concerns of the educated urban Indian, which was put on a higher pedestal each time, but also in the emergence of new political groups, either emerging from the Congress, or on their own.  Tripathi has listed and described organization and activities of  The National Liberation Federation of India (1918), the Congress Democratic Party (Tilak disagreed with Gandhi and set up the Party and issued its manifesto in 1920), the Swaraj Party (1923), the Responsivist Cooperation Party (1926), the Justice Party (in 1916 it emerged in the South to challenge the Brahmin domination in politics and became the axis of the Dravidian parties in the post-Independence years, a tradition that continues) and the National Unionist Party in Punjab (1923).  Obviously, each of these were significant for their time, most of these did not survive.  Even though Tripathi maintains that the emergence of the Congress was on nationalist agenda, several other parties emerged on communal (he uses the word in the sense of community-based and not communal in the negative sense it is used today) agenda. The significance of the Justice Party in the eventual emergence of the politics of assertion amongst the lower castes, not only in the southern part of the country, but also in the country as a whole, cannot be underrated.

Undoubtedly manifestos are professed commitments and programmes of political parties. Parties contest elections  based on a committed programme. This has gradually led to increasing voter education and awareness on the one hand, and party cohesion on the other. Obviously, the colonial government attempted to obstruct from time to time.  Irrespective of that, institutionalized systems, for example the office of the Speaker in the Legislatures, and institutions emerged. The study then goes on to analyse the Lok Sabha elections and compare the party manifestos, but these parts occupy a relatively smaller space, a major part of the study having been given to the pre-Independence era.