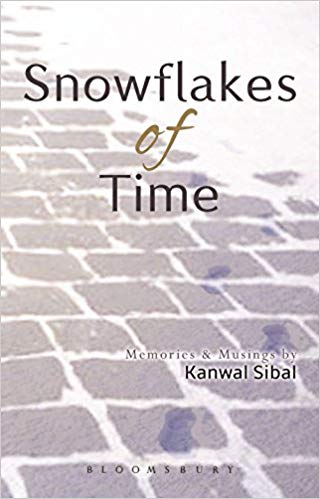 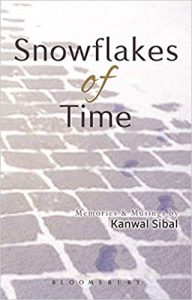 Snowflakes of Time is a collection of about a hundred poems divided into eight sections, presumably to separate them by themes. The author is a former Foreign Secretary of India. The compartments are not watertight. The sadness of ‘Time passed’ and ‘What might have been’ runs through a good number of poems in different sections. Also what the writer calls his communion with nature.

Nature holds the centre stage in the ten poems in ‘Moscow Musings’, the first and the richest of the sections.  Written in Moscow in the writer’s mellower years, which turned out to be also his ‘most fecund’ years, each of the poems is a gem. Together they conjure up for us a land as wintry, vast and unforgettable as the one that formed the backdrop to Omar Sharif in Dr Zhivago.  Here is a sample from ‘Asleep in February’:

The ground huddled itself
Beneath a thick white quilt
Pulling it over its limbs . . .

With wipers of his mind he tries
To clear the constant spray of grime
That from the passing traffic flies
As he rolls through flurries of time.

Perhaps not every poem in the sections that follow is crafted so skillfully, but there are gems to be found in every section.  Take ‘The Fingertips of Memory’ from the section titled ‘Memories’:

Across the distance
That now divides,
Only thoughts can travel, . . .
To fill the solitude
Of the present . . .

And so the lamp-post stood
Year after year . . .
Its face lost its glow  . . .
On the pulsating life below
Of which it no longer
Felt it was a wanted part . . .

—‘The Lamp-post’ in the section Catharsis

The author’s style of writing is simple—deliberately so. Poetry, he believes, should not be so abstruse that it’s meaning is not immediately clear. There is a danger here, of course, of the reader racing through the poem, not pausing to admire the scenery, impatient to know the end. For many of the poems are also narratives. Perhaps the trick is to read the poems twice, savouring every word the second time.

The collection features poems in rhyme as well as in free verse.  Rhyme brings with it its own music, and so is more enjoyable, but English is not a rhyme-friendly language.  Often, just to get the rhyme right, the poet is forced to sacrifice bits of what he wishes to say. Happily, Sibal prefers rhyme. Happily also, he seems to have no difficulty in crafting poems in rhyme without sacrificing anything, like in ‘The Peak and I’, from the section titled ‘Nature’s Bond’:

In humbling it I could foresee,
I would lose out much more,
The mountain would not mean to me
All that it meant before . . .

Then there are the three poems shaped, yes, unbelievably shaped, like their subjects: ‘Letters Perfumed’, shaped like a perfume bottle; ‘To Your Health’, shaped like a champagne glass; and ‘The Heart of Memory’, shaped like a spade in a deck of cards.  These must have been hard to get right.   They are an absolute delight to read, as are also the few poems written for the amusement of his children.

What the collection will be remembered for, however, is the section titled ‘Humour’. The title is misleading, for the twenty poems in it (with names like ‘Kneeling for Diplomatic Slaughter’, ‘Double Standards’, ‘Oh Sonia Dear’, ‘Agenda for a True Nationalist’) are on deadly serious subjects, written with a deadly serious pen. There is wit in its ink, much sarcasm and frustration-turned-into-anger, and courage going over the brim now and again. But there is also a lot of food for thought. A sample:

It is most difficult to find
The sense of what is in our mind . . .
The fear is real that the long rope
We give to Pakistan in hope
Of its reform could well be used
To hang an India all confused.

Pakistan gets the lion’s share of these poems.  But others are not spared.  The West gets its fair share in ‘Double Standards’ and a couple of other poems; Rajiv and Rahul Gandhi perhaps more than their fair shares; politicians as a tribe perhaps less.  But the hardest blow is left for those whom the writer calls, sarcastically, the ‘True Nationalist’, whose aim is described in the last words of the poem.

A hobbled India all-adrift,
With no centre of gravity,
Wracked by divisiveness and rift,
Is better for posterity.

The biting words in this poem—or, for that matter, in any of the poems in this section—may make some readers squirm, but it is hard to argue with them.   And one is left absolutely speechless after reading the solution, with sarcasm dripping from every line, that the writer proposes for Dalits in his ‘Unearthly Politics’.

For Dalits to escape the world
Of oppression that they still face
Into space they must be hurled
To distant planets they must race . . .

Kiran Doshi is a retired diplomat and author.