Poetry Does Not Know Borders 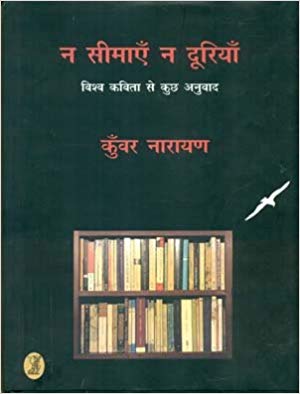 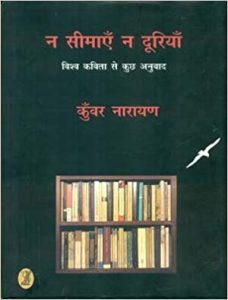 Kunwar Narain was one of the few Hindi poets who believed in the universality of all indegenous poetic experiences and thought of himself as an integral part of the great brotherhood of world poets. His poetry stands as a testimony to this. Apart from poetry and literature, his concerns ranged from world cinema, music, theatre to various branches of knowledge. Translation was also one of his passions which he considered as an extension of his original writing, a process closely associated with his creative process. He was probably the first Hindi poet to have introduced the reader to the great Greek poets like Constantine P Cavafy and George Seferis and poems by celebrated Argentinians  author Jorge Luis Borges. His Hindi versions of Cavafy’s two poems ‘Barbarians are Coming’ and ‘The City’ are still read by the readers with great interest.

While translating, Kunwar Narain never had a plan or a project of selecting the poets, he translated whatever poems he liked and found necessary to be included in the Hindi repertoire. It was just a ‘swantah sukhaay’ (for his own pleasure) effort. But what we get now is a well laid-out, 280-plus pages book Na Seemaayen Na Dooriyaan (Neither Borders Nor Distances) which he was fortunately able to see as a book in his lifetime. It is probably one of the best volumes of translated poetry in Hindi in recent years and provides a wide range of great poetic expressions starting with Homer, Christopher Marlow and Sappho and ending with moderns like Derek Walcott and Ted Hughes. Among the 30 poets, there are authentic voices from the sixteenth to the late twentieth century. Being a modernist with a fondness for classical poetry, Kunwar Narain begins with Homer, Marlow, Sappho, Dante Alghieri and William Shakespeare, but his focus is on the great voices of Cavafy (Greek), Borges (Spanish), Tadeusz Rozewicz and Zbigniew Herbert (Polish), Vasco Popa, (Serbian), Bertolt Brecht, Gunter Grass and Gunter Kunert (German) Philippe Jaccottet (French) who shaped the contours of the poetry as we know it today.

In his preface, Kunwar Narain admits that ‘even the best translation of a poem can hardly do justice to the original poem, and still, the process of translating in any mature language never stops.’ He continues, ‘for me, translation does not mean merely changing the linguistic clothes of poetry, but to reach its interior which turns it into a poem, to that specific experience that makes it a specific creation.’ It is widely believed that the translation of poetry is a difficult task and if something is lost in the process, it is the poetry itself. Some people even speak of untranslatability of poetry in the sense that if a translator remains loyal to the original, he or she bears the risk of being unfaithful to the target language and vice versa. There are some excellent translators who hold that translation is an extension of one’s poetic process and it is a translator’s domain. Kunwar Narain, a believer in ‘majjhim nikaay’, takes a middle path and says, ‘some poems are so deeply immersed in the linguistic culture and environment of their respective languages that it becomes almost impossible to carry them faithfully to the language of translation. As such, I have tried to widen the concept of translating to transcreation, and in the process, giving much liberty not only to the discipline of a translator but also to the freedom as a poet.’

The careful selection of poems in this volume makes it a collector’s item. Most of the poems given here are those which helped establish the significance of their respective poets. For instance, Cavafy is represented here by his celebrated poems ‘Waiting for the Barbarians’ and ‘Ithaka’, Rozewicz by ‘The Return’, ‘Grass’, ‘The Survivor’, Herbert by ‘Elegy of Fortinbrass’, ‘Silk of a Soul’, Borges by ‘The Other Tiger’, ’Knife’, Vasco Popa by his ‘Little Box’ series and Anna Swirszczynska by ‘The Biggest Love’ and ‘When We Wake Up In The Morning.’ Even though there is just one poem each by some other great poets like Walt Whitman, Pablo Neruda, D H Lawrence, Ezra Pound, Louis Aragon, Atila Jozsef, Yannis Ritsos, Gunter Eich, and Derek Walcott, what is remarkable is the careful selection of poems by Kunwar Narain. Thus we have Neruda’s great poem of despair, ‘Tonight I Can Write’, D H lawrence’s ‘Man and Bat’, a crisp poem by Ezra Pound, ‘Epitaphs’, resembling the poetry of great Chinese poets of theTang dynasty, Yannis Ritsos’s ‘Search’, Walcott’s ‘Tomorrow, Tomorrow’ and James David Rubadiri’s ‘A Negro Labourer in Liverpool’.

All poets are accompanied by Kunwar Narain’s commentaries which are as brilliant as they are informative. They represent a panoramic view of the poets’ body of work, the time and milieu they lived through and their overall contribution. Here we come across a translator who is not merely a translator but a keen and passionate student of world poetry. Photographs of the poets add to the richness of this anthology. The book ends with a well-known Hindi scholar and translator from Poland, Renata Chekalska’s conversation with the translator, and a comprehensive review of the quality of Narain’s translation by Hindi poet Geet Chaturvedi. It is natural as Narain has included a very large number of translations of Polish poets in this volume.

Most of Kunwar Narain’s translations are excellent, extremely readable and unputdownable. A number of the poems sound so innate and flawless as if they were written in Hindi rather than carried from some alien language. Kunwar Narain tries to maintain the diction and structures of many poems, and in some poems, as in ‘The Cyclical Night’ by Borges, he even retains the scheme of meter according to the original Spanish. This might have resulted in being a bit mechanical at places, but such experiments go well with the job of a translator.

This volume reminds one of several such initiatives of translating foreign language poetry into Hindi. Poets and translators like Chandrabali Singh, Dharamvir Bharati, Raghuvir Sahay, Srikant Verma, Vishnu Khare, Varyam Singh, Viren Dangwal, Prabhati Nautiyal, Trinetra Joshi, Girdhar Rathi, Asad Zaidi and Narendra Jain have translated selections from Pablo Neruda, Nazim Hikmet, Bertolt Brecht, Chinese poets from the Tang dynasty, Soviet/Russian poets like Pushkin, Vladimir Maykovsky, Andrei Voznesensky, Evtushenko, Anna Akhmatova, Bella Akhmadulina and others, and of course, great Polish poets, Ceszlaw Milosz, Rozewicz, Herbert and Wislawa Szymborska whose poems were translated by Ashok Vajpeyi and Renata Czekalska in many volumes on different occasions. There is also one noteworthy book of world poerty Roshani ki Khidkiyaan (Windows of Light) translated by poet Suresh Salil. Kunwar Narain’s book undoubtedly falls in that category even though being a bit random when compared to those well-planned anthologies. Moreover, it has brilliantly done comments and notes on poets which the other books might be lacking.