Political Settlements And The ‘Agrarian’ 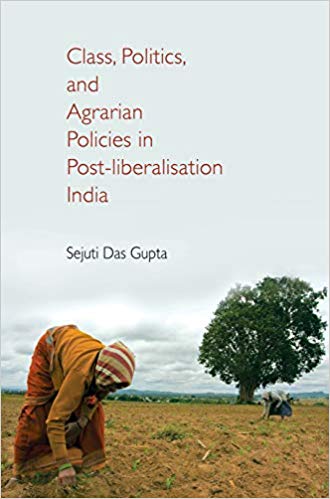 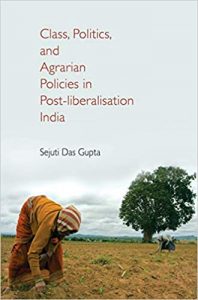 Class, Politics, and Agrarian Policies in Post-Liberalisation India by Sejuti Das Gupta is a valuable and timely contribution to a political economy analysis of state and agrarian policies in India during the period of neo-liberal economic reforms. That Indian agriculture has slipped into some kind of a persistent crisis, leading to rural distress since the late nineties is something that has been amply written about and recognized. What however happened to the strong erstwhile rural proprietary classes which had emerged after Independence from colonial rule, under economic reforms has remained an interesting question.

The strong big capitalist farmer lobbies which had led the accumulation process under the ‘Green Revolution’ regime were faced with changed circumstances with the whole range of market-friendly economic measures that were introduced in the Indian economy since the early 1990s. This book tries to develop an understanding of the new relations between the agrarian ruling classes and the state or what is the new political settlement that allows the continuation of neoliberal economic policies in spite of the agrarian crisis. This, therefore, goes into the heart of the functioning of a diverse political democracy like India.

Based on a skilful amalgamation of Poulantzas’s concept of ‘relative autonomy’ of the state and Mushtaq Khan’s ‘political settlement’ idea, the author adopts a framework of differentiated classes and their relation with the state, in a broad Marxian tradition. This is useful in answering the central question raised in the book regarding the traditional rural proprietary classes’ response to economic liberalization. The analysis in the book is based on a rich assortment of field-interviews of and group discussions with various stakeholders in agriculture, collected through fieldwork in three States, Chattisgarh, Gujarat and Karnataka.

The book meticulously documents the responses of the dominant rural classes and castes in these three States to the new economic situation emerging over the last two decades. While the dynamics of the relationship that is forged between the dominant classes/castes and the state varies across the three States, the study finds active and close ties between the members of the ruling classes in rural areas and the state processes. This is what fuels accumulation by these classes and is symptomatic of the prevailing political settlement.

It is important to note that erstwhile capitalist landlords/farmers are significantly metamorphosed while trying to take advantage within the new economic situation. For example in Chattisgarh, the author finds ample examples of the dominant farming classes foraying into non-agrarian channels of accumulation, like in mining or power plants, aided significantly by favours extended by the political establishment. In Gujarat, there are significant investments of surplus generated from commercial agriculture in trading activities. In Karnataka, commercial farming of a more advanced capitalist nature is where the big farmers have invested, not only in the production but also in the circulation of inputs and crops in the markets. Importantly, this is aided by strong patron-client networks within the political system.

In more general terms, the upstream and downstream industries associated with agricultural production have emerged as new multiple sites of accumulation for the rural proprietary classes across the States. The comprehensive analysis by the author of the input markets in agriculture, particularly for commercial crop cultivation, and their linkages with emerging informal credit relations throw light on how the rural ruling classes have diversified their accumulation strategies. Taking up dealership of agricultural inputs manufactured and marketed by multinational companies is a compelling example of how the petty capitalist classes have emerged as junior partners of organized capital. Needless to say, this process is not uniform in nature and is mediated by various arms of the state, including the local governments.

Whether the rural proprietary classes have an equal say in agricultural policies as big, organized capital is doubtful. From what evidence emerges in this study, they hardly get much say in the larger government policy framework for agriculture, though they exert pressure with regard to prices or credit. To what extent they are subordinate to corporate capital is not immediately evident from this study but is surely an area for further inquiry. For a historical understanding of the changes in the positions of the traditional rural proprietary classes within the political and economic system with the advent of global capital, this relation between organized capital and big farmers needs to be investigated further.

A clear understanding that emerges from the book regarding the accumulating classes in rural India is that those classes that are still accumulating capital within agriculture are essentially doing so through secondary relations of exploitation within the sphere of exchange like input credit, money credit and output commissions, and not anymore through the primary relation of exploitation of labour within the sphere of production. Otherwise, they are accumulating in non-agricultural domains. In this respect, the one conclusion of the author that needs to be treated with caution is the one regarding the McMichael-Patnaik argument. The latter hypothesizes that all peasant classes are adversely affected by the entry of corporate capital with globalization. The author contends that this book challenges that notion as certain farmers are being transformed into capitalist farmers as a result of globalization.

One needs to be cautious about this contention precisely because of the findings that the book presents. In a situation where the source of accumulation is mainly from input margins, interests of credit advances or output commissions, and not in the domain of production by creating surplus-value through labour exploitation, the historical role of rural capitalist farmers in unleashing the forces of productivity, through an improving capitalist organization of agriculture, is relegated to a secondary concern. Thus, agricultural productivity can continue to remain a constraint even as the proprietary classes accumulate. The only exception is the thin section of capitalist farmers who are growing export crops, where the development is directly constrained by the volatility of the export markets. In fact, one needs to rethink whether most of the rural proprietary classes accumulating by developing an intricate relation with the state (something that has been elegantly demonstrated by the author) largely in various spheres of exchange, still qualify to be called capitalist farmers.

Rather, in case their investments are not primarily located in core agricultural production, they are more aptly described as rural petty capitalists or rural agents of organized capital. In such case, the historical role of ‘peasant differentiation’ as understood in the Marxist development lexicon remains absent in the current rural differentiation that we are witnessing. Where rich peasants/big farmers, in order to continue accumulating under conditions of globalization, are shedding their primary identity of ‘peasants’, then this differentiation cannot have a transformative implication for agriculture in the long run. This is where the McMichael-Patnaik strain of thought may still be needed to be taken seriously.

What needs to be recognized is that under globalization, there have developed multiple channels through which agrarian surplus is funnelled out of agriculture and more importantly, this surplus is then not driven in industrial/manufacturing production but largely into extractive industries, private education and health facilities or real estate/construction sector and the financial markets. These macro-economic processes, driven by financialization, that are dominant under globalization arrest the development of both agriculture and the industrial sector. Consequently, rural differentiation needs to be viewed from a modified theoretical lens.