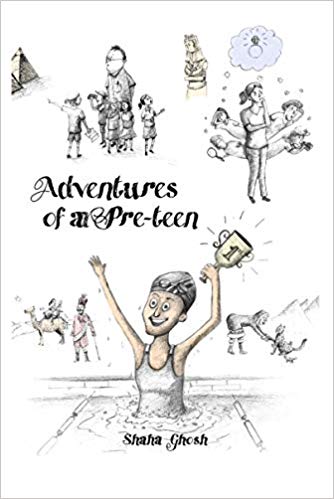 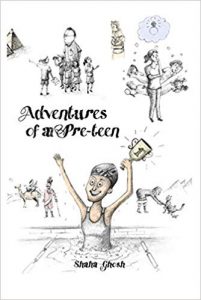 Adventures of a Pre-teen by Shaha Ghosh is a collection of ten short stories that deals with the adventures of a twelve-year old American girl of Indian origin. Gia, lives with her parents in Berkeley Heights, a neighbourhood situated amidst rolling green lawns interspersed with whitewashed houses.

Gia is a born detective, an adventure buff, fiery and spirited. She along with her friends has planned ahead all sorts of exciting things to be done during the holidays even before they have started. Exciting? Right? Little do they know that they have to be detectives soon enough! Gia and her two friends are popularly known as the ‘Rosewood Trio’ since they have solved complex cases of varied range much to everyone’s surprise and delight in the town. Their sharp minds with imprints of humour has time and again helped them to solve most of the critical cases with overwhelming results be it exposing a wealthy heiress who is a kleptomaniac or nabbing a thief to prevent a shopping complex from getting robbed. Cheers to The Rosewood Trio!

Also, the most buzzing robbery case of Berkeley High was resolved by closely monitoring the suspicious movements at Aunt Anna’s House and helping the police in putting the culprit of Rosewood Avenue behind bars. Ahhh! The success story doesn’t stop here. Gia and her aunt Ayesha (Bui Pishi) were successful in preventing a terrorist attack at the Carnival that could have caused a million deaths. They help the police to arrest the entire bunch of criminals who had links with a terrorist outfit.

However, what struck me deeply was the stereotypical approach of the author which is quite evident when she describes the terrorist as Azhar belonging to Al-Jamali, a terrorist outfit. This cultural production in literary form which ascribes certain acts and events to a particular religion is what fuels and widens the circumference of hatred and bigotry. Even inadvertent complicity is half the job done for the ominous forces, which the author puts on display. With the prevalence of such needless portrayals, readers at some point will lose interest in the book.

It is also disturbing to see how writers are perpetuating the dehumanized discourse on Islamophobia and risking the coexistence of future generations—the book under review being the case in point. I feel compelled to implore anyone with empathy and integrity to speak up against all forms of injustice from Islamophobia to homophobia.

The next story begins with schools resuming when Gia is taken to Egypt with student delegations from different schools across countries. She is happy to unveil the secrets of the ‘Hidden Tomb’ with her cousin Agastya. They buckle up to flag off the mysterious adventure and end up rescuing Queen Cleopatra and Mark Antony. Here again the flagrant display of the character sketch of a Muslim officer ‘Abdel Rehman’ whiffs out Islamophobia. He is shown to be violent and negative which can prejudice the mind of the pre-teen against Muslims.

In the summer, Gia goes to Jaisalmer, Rajasthan with her parents. They are staying in the Royal Palace as her father is there to work for the Maharaja on a project. Cutting through the dunes, dust storm and dreary sands, she along with her Indian friend Mira, manages to rescue Rajkumar from the clutches of the kidnappers. She also encounters a Cybernaut Martian Zooga and manages to rescue him back to his planet.

In the last few stories, Gia brings laurels both to India and USA in an international swimming competition as both countries do not let her go and want her to represent them. Gia is also compassionate; she manages to build a kennel for a small homeless pup and lovingly names it ‘Cheetah’.

The book has certain problematic generic portrayals but can be read once. However, stereotypical portrayals are not good for young impressionable minds.

Rafia Reshi is pursuing her Bachelor’s degree in Politics in the department of Political Science, Jamia Millia Islamia, New Delhi.