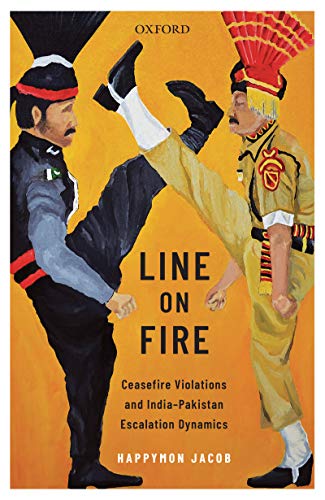 Happymon Jacob is a rising-star, academic and journalist, a columnist with The Hindu and anchor of a web series on strategic affairs at The Wire, besides teaching at a leading international relations faculty at the Jawaharlal Nehru University. His book justifies the preceding sentence. He has taken pains in using escalation theory to interpret the data gathered on ceasefire violations since 2003 to reveal that India and the surrounding regions are sitting on a seemingly dormant, if not active, volcano. The data collation and analysis work was undertaken as part of a project he spearheads, India-Pakistan Conflict Monitor that has his doctoral student, Tanvi Kulkarni, assisting with the research.

Happymon makes the case that the ceasefire violations (CFV)––ever so routine as to be easily dismissed as inconsequential––not only have an inherent escalatory potential, but also serve to exacerbate crisis. Escalation is along three dimensions––political, diplomatic and military. In a key contribution, he reveals that CFVs are largely generated by ‘autonomous military factors’ (AMF) internal to the two militaries engaged in eye-ball-to-eye-ball confrontation on the Line of Control (LoC). He makes the case not only by looking at the data he has culled but also from eight case studies demonstrating the impetus to escalation stemming from CFVs.

Jacob’s finding is that the escalatory potential of CFVs can no longer be neglected since media-fanned nationalism may tie down a crisis decision maker’s hands, forcing a choice that may not be the rational and preferred option. His recommendation as a corollary is that an institutionalized regime along the LoC and the international boundary (IB) needs to be put in place.

The book had a timely release, hitting the shelves just prior to the recent India-Pakistan crisis. The crisis witnessed India’s trans-LoC aerial strike at Balakot, followed immediately by Pakistan’s vertical escalation along the LoC in the Rajouri-Naushera sector in military targeting by its air force, both for the first time. While a terror attack three years back at Uri that is close to the LoC resulted in surgical strikes, this time the crisis was sparked by a terror incident away from the LoC. It only partially played out on the LoC in heightened CFVs and the use of Pakistani aerial firepower astride it. (The precedent for an aerial attack on the LoC was in the Indian use of air power on the LoC in 2002 during the long-duration crisis, Operation Parakram.)

Reportedly, as the crisis ratcheted up, India readied missiles for retaliatory strikes to any Pakistani counter attack to its Balakot aerial strike, with Pakistan promising to respond in kind. Belated intervention by the Americans stayed yet another round of missile exchanges. What the crisis suggests is that a future crisis may be set-off at a higher threshold of blows, making it more difficult for either side to step off or step back. Happymon’s book is a timely reminder that the next crisis may not be triggered by a terror incident, but is as likely as not to spring from situational dynamics along the LoC itself.

Jacob implacably reveals the policy shortcomings of the two neighbours, into their eighth decade of sharing a common border. While for the militaries on the LoC to be in an operational active state may be understandable, it cannot be condoned on the basis of there being no common ground rules along the length of the international border. Apparently the last meeting to work out mutual border guarding standard operating procedures was in the early sixties. He is entirely right in characterizing this state of affairs as an unacceptable abdication of political responsibility and bureaucratic inattention that requires urgent fixing.

While known within strategic circles, Happymon spills the beans for the lay reader that the ceasefire along the LoC is not based on a written document but is ‘an understanding’. This was supposedly arrived at in a telephone conversation between the two military operations chiefs, with some parleys preceding it. Happymon ascertained in his interviews (he did 80 interviews of practitioners and members of the strategic community) that diplomats continue to be hesitant to put down the agreement in writing. This lack of institutionalization of the ceasefire two decades into its informal existence makes the LoC a fertile site for a spark to light up the tinder that the two sides have gathered on either side in their neglect of conflict resolution in Jammu and Kashmir.

Both sides seemingly prefer an active LoC. To the Pakistanis it enables infiltration by terrorists, while to the Indians it enables retribution across it. This setting is conducive for what Happymon identifies as Autonomous Military Factor (AMF) and their independent contribution to escalatory dynamics. These range from relatively mundane factors as personality traits and regimental reputation to an impulse for revenge and gaining moral ascendancy over the other side. AMFs are anchored in the institutional culture of the military, as also in military subcultures. Happymon unpacks this factor over a chapter, with a cautionary finding that AMFs need the attention of security minders, and especially since these days what happens at the LoC seldom remains there. The effect of body bags returning to district towns across India illustrates the political fallout.

Another useful chapter comprises eight case studies of three types of cases: one, where CFVs drive escalation; two, where they contribute to exacerbate crisis; and, lastly, in which CFVs are the vehicle for conventional military escalation. In the first case study of Operation Parakram at its mid-point when terrorists struck at army families staying in the rear, he shows how the resulting crisis played out in heightened CFVs along the LoC rather than eventuating in war. The LoC provided a venting ground. A case study of the CFVs in summer 2013 provides evidence of the second type of escalation, in which an incident in which five army men died on the LoC resulted in aggravating the political and diplomatic situation between the two countries. The third type of escalation––of which the recent aerial strike by Pakistan is an example––is possible to envisage in light of Operation Kabaddi that Happymon covers at the beginning of his book. Operation Kabaddi was a reverse Kargil operation that was to be undertaken by India in late 2001, but was aborted by the intervention of the Americans in the region in pursuit of bin Laden, the perpetrator of 9/11, then hiding in Afghanistan.

If expansive aims are not attributed to the Kargil War––it being intended to cut off Ladakh and Siachen––the war can be seen as resulting from an escalation of the confrontation in the mid-nineties. India was having the upper hand along the Neelum Valley, interdicting Pakistani supplies along that route. Pakistan wanting to reverse the score, decided to intrude into the  Kargil sector in order to similarly interfere with Indian supplies along the route to Ladakh. The rest as they say is history, with Pakistani mission creep and India’s stern reaction making for a minor war. Though the two sides are at the second decadal anniversary of the war, the situation on the LoC remains equally fraught.

Happymon calls for focus on the dynamics of the front lines. He recommends a clear and detailed agreement on the ceasefire along the LoC and on ground rules for the IB. The AMFs and the role of military cultures in CFVs require being contained by escalation control measures such as flag meetings, as also military glasnost such as exchanges of delegations, institutional level visits, attendance at seminars and so on. Happymon ends on a realistic note, writing: ‘The exercise of ensuring stability in the subcontinent lies in routine and mundane measures, not in the sublime and grandest of moves.’ However, to this reviewer, the book serves to underline that the best conflict prevention is in addressing root causes, problems of which CFVs, aggravated CFVs and border wars are merely symptoms.