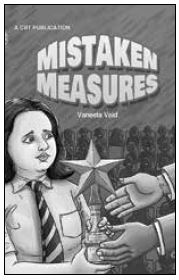 Bulimia is estimated to affect 6.5 million people…Bulimia is frequently associated with other mental disorders such as depression, anxiety, and problems with drugs or alcohol. There is also a higher risk of suicide and self-harm.

Vaneeta Vaid’s story about a Class X student named Kalyani who develops an eating disorder due to her obesity is addressed to schools, parents and our entire community that encourages body shaming while laying emphasis on stereotyped physical appearances for girls. With a powerful social message aimed at the physical and mental wellbeing of children, Vaneeta shows just how easy it is for eating disorders to take root in an individual while remaining unnoticed by close friends and families.

The protagonist of this short novel is a shy but brilliant high schooler with few friends mainly due to her ‘baby elephant’ and slovenly appearance that includes the bad habit of nail biting. Praised by her teachers, especially her math teacher for her good grades, motivation and keen willingness to help her fellow students, Kalyani is proud of the attention. At the beginning of the novel Kalyani’s best and perhaps only friend, Simi informs Kalyani that she will be changing schools, rendering Kalyani a social pariah amongst her classmates who jeer at her almost Sumo wrestler-like appearance.

Soon after Simi’s departure, the appearance of a new entrant, a handsome Xth grader Amit, causes butterflies in Kalyani’s stomach that, as time goes by, also creates in her a desire to reduce her weight. Not knowing how to achieve rapid weight loss, Kalyani resorts to taking her grandmother’s laxatives to wash out her system. This is soon followed by bulimic episodes, which leads Kalyani’s temper to fray, bouts of sleeplessness and anxiety. Her once admiring teachers now begin to berate Kalyani for her slipping grades. Improved physical appearance cannot compensate for academic non-performance.

The pace at which she loses weight causes her immunity to deteriorate. She begins to have hallucinations, which eventually leads to a nervous breakdown. Kalyani’s recovery in the hospital acts as a catharsis for her and her family who are able to reconnect with the help of a counselor. Kalyani starts to eat again and her parents decide to join a support group for individuals with children suffering from eating disorders.

Ending with a speech by Kalyani six years later at her former school about her bulimic condition, the novel reaches out to other children suffering from eating disorders: Take a deep breath and say, ‘this food is a treasure I need. My body is a temple form my soul and I need to preserve it, not abuse it…exercise and choose healthy options to have a healthier body.’

Rohini Rangachari has studied law and worked in the legal profession in India and France. She is now a French language professional.