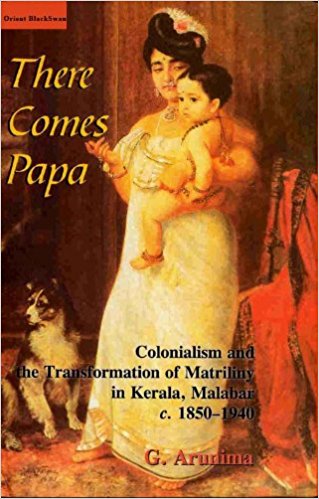 This is a tensely argued book, which was submitted perhaps a decade ago in Cambridge, as a doctoral thesis. I have heard interesting snippets of it at seminars, at Teen Murti Library (NMML) and the Institute of Economic Growth since 1995 or so, and have been waiting for it to be in print for many years. Orient Longman has fortunately taken the responsible decision of seeing this work come to general view. There will be many different ways of reading the material provided by Arunima, and for anthropologists particularly, classroom teaching will take on a different hue with the reading of this book. Contentious or not, the attention that this book will receive in the coming years cannot be doubted. It is a complex weaving of legal cases, newspaper accounts, family histories and fiction, of that disturbing period of the colonial confrontation with tradition, when matriliny became patriliny, in the matter of decades marked by sustained litigation.It is indeed curious that judgements in law courts are such a substantial source for history writing or anthropological reading. Perhaps the scrutiny to which law court judgements are always put under, by a knowing and knowledgeable public, makes the judiciary a self aware institution of significant scribes.

My work on the Syrian Christians, which was also a doctoral dissertation submitted to Delhi University in 1987, and published in 1993 as The Christians of Kerala, depended heavily on law court cases. So it is here that I wish to make the first set of comments.

At one level legal discourses are open to scrutiny, at another level, they represent the tussle with dominant voices in the community —whether in assent or discordance, they communicate the rage and the desire of that time. I think Arunima has handled very neatly, the spaces by which a conversational space of doubt in family courtyards or neighbourhood streets become larger and more organized as social currents which then are represented in newspapers, fiction, and outright activism to bring about change. Laws don’t just appear – there is a cumulative space where the debates are first voiced then legitimated. This is her most subtle contribution in the book and she uses her materials well. It also puts to test the comfortable assumption that customary law is a homogeneous space from which death, birth and marriage can be judged as a site where Hindu law and patriarchy can be discussed. Clearly there is a desperate need for area studies where we can see customary law, canonical law or rational legal systems at work. Theory makes sense only when we juxtapose it with the teaching of ethnographies, which prove or disprove the general case.

The methodological problems of studying the Nairs is very clear to her. Are the Nairs of Malabar in the same situation as the Nairs of Travancore? The generalizing impulses of Grand Theory in sociology are vulnerable, as C. Wright Mills showed us, when it comes to the tasks outlined by interpretative or historical sociology in the Weberian perspective. This is really the battle axe of Arunima’s work. Were all the Nairs polyandrous? If there are many subcastes will the operative principles for each of these be the same—or will hierarchizing principles give us interesting differences of caste, class and gender, for example at the highest level land owning aristocrats, at the lowest temple attendants? And this is what is going to make those sociologists who are fixed in their views, that jati is as fixed a category as varna, find this book very difficult. Those who see sociology as a method that explains process as much as structure will not be in any disquiet with the data offered.

There are so many debates and quarrels about the validity of cultural studies, yet most of that disquiet is irrelevant here. Arunima looks at culture as a fluid changing set of institutions and relationships. These are agents of change as well as receptacles of stabilizing discourses. She is sensitive to the contributions of Kathleen Gough, K.N. Pannikkar and Robin Jeffrey, but wishes to argue that land relations are more complex than the idea of dominance or the absence of men. If agricultural communities are to be studied, one has to understand the “ideological imperatives behind the specific meaning of the constitution of marriage within that society.” This she does very neatly by looking at the tharavadu as the site for anlyses of the questions of caste, class, gender and kinship. The tharavdu becomes located thus within questions of types of affiliation between not just patrons and clients – too mono causal a reading – but the nuances of dominance, servitude, autonomy, hierarchy and rebellion. Power is not a static consequence of fixed elements for Arunima—it is a shifting and contextual discourse. The Nair-Nambuthri relationship becomes intermeshed not in the conventional reading of the signs of “an avaricious sexuality”, which has been for her the site of a later reading of novels as cultural productions, but a retelling of the landlord-cultivator relationship.

The most successful portions of her book deal with the catalyst of colonialism, commerce, professionalization of younger sons in multinational British companies and the drive towards partition, inheritance and monogamous nuclear families. This transition to patriarchal imperatives, she argues comes from the reading of law court cases, where British judges saw the avunculate as merely another form of patriarchal function. When a father and the mother’s brother quarrelled over the guardianship of two children (Baputty v Chathu) in 1872, the High Court Judge, Holloway declaimed that “By the principles of the laws of Malabar, the mother herself, while alive, and her children too, were under the guardianship of the head of the family, the karnavan. Their position was precisely analogous to that of a Roman family under patria potestas. The karnavan is as much the guardian and representative for all purposes of property, of every member within the tharavadu, as the Roman father or grandfather.” It would seem therefore that function and analogy sometimes work successfully to disguise reality. Yet Arunima is not able to draw into her small, compacted, dense text the actual voices that make social life what it is. This absence is very disquieting.

Malinowski in his special foreword (authorially dated 1931) to The Sexual Life of Savages writes “The function, therefore, of many features of human culture is not the direct satisfaction of nutritive or sexual needs, but rather the satisfaction of what might be called instrumental needs, that is, needs for instruments for means to an end, the end being the biological well-being of the individual, the procreation of the species, and also the spiritual development, and the personality, and the establishment of a give-and-take in social cooperation. Instrumental needs, again, that is the body of artifacts and social organization imply other requirements. The whole production is based on knowledge, while social organization is based on morality, religion and magic. We have therefore cultural wants of a yet higher degree of derivation, and I like to call them integrative need.” Arunima sets the ball rolling about exactly these issues which fire our imagination today—is personal law conducive to the rational integration of society and are there humane ways by which assimilation to codified law takes place? Who decides who are the losers in this game of litigational diversity or uniformity? In the case of the Nairs, the women lost many powers which had contributed to their self awareness as human beings, in a generally male dominated, even if not patriarchal society.