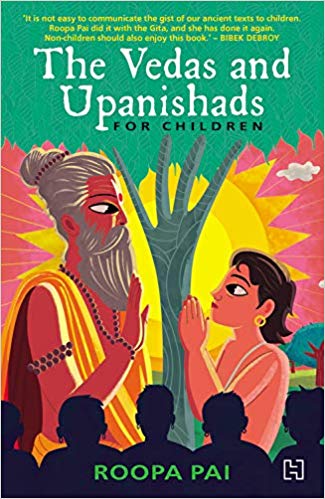 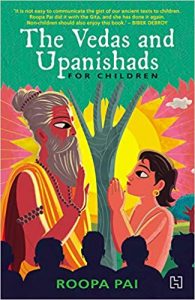 I remember picking up Roopa Pai’s The Gita, for Children at an airport bookstore and while flipping through the pages spotted a subhead that said, ‘A Killer App for Contentment’ and I knew the book was for me. Then all through the flight I was doodling through the pages and smiling at the whacky take on a very solemn and ancient treatise. It made that crunched-into-the-economy-class-middle-seat experience sort of bearable.

Now to my delight Pai has taken on something even tougher than the Gita—the Vedas and the Upanishads. As a reluctant reader of Indian philosophy, I have to confess that I doze off every time I open any tome by S Radhakrishnan, finally here was a book that explains it in my lingo. I know that many adult readers will find this book both easy to read and enlightening. Imagine someone making the ‘neti neti’ line easy to understand without using words that need a dictionary to decipher.

For a book on a complex subject like the Vedas and the Upanishads the research has to be impeccable and then it has to be presented in a light and humorous manner that children can relate to and that is not easy at all. Pai is becoming very adept at this challenge.

At a time when our mythologists in parliament are turning ancient India into a la la land of headless Ganeshas and pushpak ratha space-ships it was reassuring to discover that Pai was sticking to proven facts and supports the historical belief of an Aryan migration. She then reminds us that Indian philosophy welcomes questions and debates and the Upanishads are all about queries and speculations. Cities in ancient India had debating halls called kahutuhal shalas where philosophers defended their theories and even the Buddha did so. At these debates you could present any concept from atheism to hedonism with complete liberty and no one was declared anti-national for laughing at the king.

All through the book Pai goes on gently busting myths. ‘True rishis were not escaping the world at all! In fact it was the world with its infinite wonders and apparent randomness which fascinated and engaged them.’ She emphasizes that rishis encouraged pupils to agree, disagree or if the mood took them, sit on the fence. Then she describes the Vedas and the Upanishads as sources of ‘secular wisdom’ and when I read those two words I sighed in happiness. Things have not been easy for us secular vadis recently.

The section on the Upanishads was a revelation. Pai has analysed the ten most important Upanishads from the Isha and Kena onwards and ending with the Brihadaranyaka and I discovered that each Upanishad has its own shantih mantra. Here is an idea. Why don’t we come up with a small pamphlet of these lyrical poems that we could read at dentist’s waiting rooms and traffic jams? The wonderful phrases are perfect stress busters, as we gain both peace and wisdom whispering ‘Om shantih, shantih, shantih…’

When you are taking a complex narrative, be it history or philosophy, the real challenge is to help a young reader understand concepts. As I have discovered, even a twelve year old may not totally grasp the meaning of democracy or a republic; become confused about the role of a parliament or the judiciary. Still in history you are dealing with facts, it is much harder to clarify the Brahman, the advaita philosophy of Shankara or the meaning of the Gayatri mantra. Pai solves the problem by using contemporary references that range from the Beat poets and Dara Shukoh to the Sound of Music.

My favourite was finding that the poets of the Rig Veda were really spiritual brothers of Groucho Marx!

‘These are my principles. If you don’t like them, I have others,’ says Groucho Marx generously.

‘This is my creation myth. If you don’t like it I have others,’ say the poets of the Rig Veda.

Now that is a creative leap that you are not going to forget easily.

The bell ringing, ash smearing Hindus would be saddened by Pai’s clarification, ‘Unlike most other formal religions in the world today, belief in God is not central to Hinduism–one can be a good Hindu even while questioning the existence of God.’ And she is not looking at the past with pink tinted Hindutva spectacles either, stating bluntly, ‘The real downside of the gurukul system was that a lot of scary smart girls and shudras never got the opportunity to try their luck at academics.’ Never forget, that dreadful misogynist Sage Manu was also a rishi.

We have to acknowledge that the Vedas and the Upanishads are going to be a tough read for young minds. The inclusion of poetry, stories and Pai’s easy-going style makes it easier but still there will be much they will not understand. If the book engages their attention one hopes they may go back to it again. Also, I do recommend it to adults who have no problem reading a book for children because they will gain much. What they will absorb is that the ‘Upanishads is the set of conclusions all that questioning and analyses threw up. Those conclusions are so wise, so secular and so liberal that it makes a lot of sense to revisit them today, at a time when the world seems more divided than ever before.’

This book revives what Hinduism truly stands for and we need it in every school and college library.

Subhadra Sen Gupta enjoys introducing India’s amazing history to young readers, through both fiction and non-fiction. Her The Children’s History of India, (Rupa / Red Turtle) was specially written for every child who falls asleep over a history text-book.