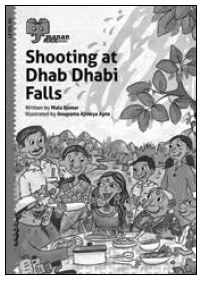 Shooting at Dhab Dhabi Falls published by Manan books is part of their Urja Series. These are stories that are set in the Indian landscape, with tidbits of information in between that encourage middle schoolers to think and recharge their minds. This story is set in a place called Mukrapura close to the Dhab Dhabi Waterfalls in Kalaburagi, where the Baligar family is running a home style restaurant. The entire family works at the restaurant dishing out local delicacies like Jolada roti and Ennegayi with homegrown vegetables. The Ajja, Ishwar Baligar, is an avid Bhimsen Joshi fan who even sings to his earthworms so that they make vermicompost faster. Things take a sudden turn, when they are commissioned to deliver food to a movie crew who are shooting at the Dhab Dhabi Waterfalls. The family of six, including the visiting cousin Sanjana, take a trip to deliver the food and to catch a glimpse of their favourite movie stars, unaware of the adventure awaiting them there. Shooting sequences, rescue missions, Ajja missing, chain snatching, mobile phone thief…the whole story suddenly turns into an action-packed movie sequence. With a happy ending, of course. The author has done a wonderful job of describing what life in a small village is like. The Baligars are also shown as people who live sustainably by composting their waste, saving water, growing their own veggies and helping the villagers. She has also tried to bring in details to every character in the story, like Ajja singing to the earthworms, Deepak not missing a chance to pull his grandmother’s leg, Sanjana’s habit of nibbling on things when deep in thought etc… The illustrations are apt and add to the story. Despite all this, there is something lacking in the narrative, which fails to engage the reader and deliver the intended message. The sustainability portions of the story are thrown in just as passing statements failing to intrigue the readers. A little more thought could also have gone into the RECHARGE sheets that are provided in between the story. Overall, a story that started well but lost track midway turning into an action movie sequence. A one-time read.

Subhashini is a translator with Pratham books and a voice over artist. She is interested in children’s literature and enjoys a well written children’s book anytime.