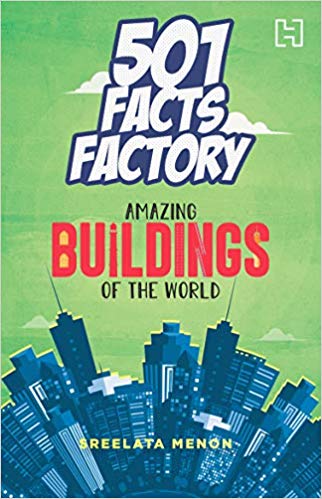 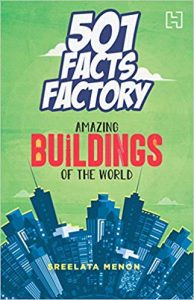 Sreelata Menon has engaged in a labour of love. The task she took on was huge, and yet, while discussing 501 architectural facts about buildings all over the world, she has succeeded in being lucid and interesting. Young people who have a skill for memory tests or general knowledge facts will find this a very interesting collection. The chapters are titled very clearly into Castles, Churches, Clock Towers, Forts, Homes, Libraries, Lighthouses, Mausoleums and Tombs and concludes with the sections on Temples, Towers and Unusual Buildings. There are 21 chapters and include Mausoleums and Tombs, Mosques, Museums, Nature Inspired Buildings, Opera Houses, Theatres and Concert Halls, Palaces, Residences of Heads of State, Skyscrapers, and Synagogues.

What is provided for ever curious teens, and literate preteens, with computer facilitation, is a map of the world, where time is presented not linearly, or chronologically, but in terms of dates, figures, descriptions of places as mnemonics, and some typically found, or commonplace, photographs of the place defined. It takes about 8 to 10 hours to read the book, though it is of only 170 pages. The line drawing facing the first chapter is peculiarly beautiful. Publishers have always depended on some image, it could be paragraph breakers which are aesthetically pretty, when they feel the book might not otherwise attract attention. Here, the one drawing to catch your attention is an image like a heart beat’s rhythm on a cardiograph, but is actually a row of continuous buildings.

Menon’s attempt is to show in brief paragraphs that the world is composed of a multiplicity, and that every war leads to a structural transformation, representing the ideology of the conqueror or the surviving victim. As a result, monuments and city plans and gardens bring to us a statement of what rulers or presidents wanted us to observe. Children will find in this little handbook a delightful memoir of the armchair traveller, all the places and palaces that people want to see. Of course, most children have a ‘palace complex’ which novelists attempt to fulfill through their stories, because the metaphor of luxury and flagrant consumption still exists in the world. The net and Wikipedia would be encyclopedias, which provide easy access to the sites mentioned. Since tourism is no longer limited to the wealthy, but senior citizens and backpack students have also access to air and train travel, before the world subsides into a natural entropy, this beautifully produced book would be a good entry point into just how much there is in the world to see.

There is a problem with the ink though, as the starting lines of each para are in thick printers ink, (bold) and the rest of the para shifts to very pale ink. These are the detrimental features of believing that children underline their copies and text-books. It is irrelevant why Hachette’s designer did this because it somehow hurts the ancient mariner’s eyes. I think the world of design must move away from the Shakespearean notion of the four stages of life, and imagine that children’s book are immensely of interest to old people, as they are expected to entertain their grandchildren, and reading aloud is one of their hobbies. This is called by Radcliffe Browne, ‘the merging of alternate generations’ as grandchildren learn a lot from grandparents, who have time on their hands. Elders are expected to enjoy the time they spend looking after grandchildren, and one way is to share the same interests that children have. A love for journeys, short outings to museums and memorials is one way that bonding occurs.

While it has an international focus, and a cosmopolitan appeal, Sreelata Menon imagines that children will be intrigued by how many bricks go into making a building, where marble is sourced, and how different temples, and religious associations provide for tourist appeal. In this sense, it is a verbal and concise map, allowing us to go forward into the iconography of the net, where we may make virtual tours. For her, India is interspersed with the other countries of the world in such a way, that we are meshed with the world’s histories in an interesting way. Item 333 in 501 Facts, however, had me a little confused:

‘The Grand Palace in Bangkok, Thailand houses the famous temple of the Emerald Buddha. The Emerald Buddha traces its roots to India around 500 hundred years ago from where it was brought after the Lord Buddha attained nirvana. It was enshrined in the Wat Phra Kaew temple within the palace grounds in 1782, when the palace was built during Rama’s reign. This is a 26 in seated meditating Buddha made of green emerald stone and clothed in gold’ (p. 113). The second sentence seems a little displaced chronologically. No other printers’ devils were noted.