The High-Priest Of Indian Cinema 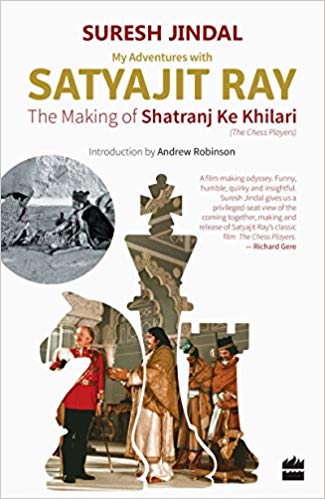 Few other film-makers in the history of cinema could retain their creativity undimmed for as long a period as Ray did. From the time he started shooting for Pather Panchali in the early fifties till his demise in 1992 with many more films still in him, he had continuously changed course, renewed himself with new vigour, and directed his prowess in uncharted areas without losing his vision and distinctive style. The key to Ray’s sustained creative vigour perhaps lies in his statement to the author of the book under review: ‘Suresh, every film is like an adventure!’

Suresh Jindal produced Shatranj Ke Khilari (The Chess Players, 1977) as he did some others like Gandhi. A young engineer educated in USA, he was smitten by the charm of cinema and took to producing films, and based on the success of his first film, dared approach the high priest of Indian cinema to direct a film. Fortuitous that he did so: Shatranj, based on a short story by Premchand, got made and as a by-product, forty years later, comes out this remarkable book.

His adventures with Ray read with Ray’s adventure with the film are so rich, nuanced and delightful that the readers will get a distinct flavour of Ray’s mind as also interesting insights into the question of what constitutes the Ray-phenomenon. The book is more than a relationship between a producer and a director. About seventy letters exchanged between them form the soul of the book, throwing light on how art gets created, how the demands of cinema as a medium propel its maker to add new dimensions to the literary original.

Structurally, the book has been divided into ten chapters—starting from the initial encounter through ‘The Beginnings’, ‘Research and Scheduling’, ‘Casting’, ‘Final Preparations’, ‘Filming’, ‘Post-production’, ‘The Release and After’, and ending with ‘Looking Back’. To make the book comprehensive even to ones not familiar with Ray and his oeuvre, a brief biography has been included together with a Foreword by Jean-Claude Carriére, the noted French writer and film-maker and an Introduction by Andrew Robinson, renowned British author and Ray-biographer.

The book details how Ray conceptualized the film. To quote Robinson ‘… not only had Ray taken on the re-creation of an entire culture that was not his own, he was also having to confront his own ambivalence towards the British Raj and, in particular, the contradictions of King Wajid Ali Shah, one of the most bizarre monarchs….’ The story set in the Lucknow of 1856 of two noblemen, Mirza and Meer, obsessed with the game of chess was intertwined with the larger game being played by the British. Robinson writes, ‘It is not at first apparent what Mirza’s ignorance of his wife’s dissatisfaction with him may have to do with Outram’s intention to annex Awadh; but by the end the link is clear, when Mirza’s cuckolded friend Mir remarks … “We can’t even cope with our wives, so how can we cope with the Company’s army?”’—this is where the two strands of the film, fictional and documentary, meet.

While remaining faithful to the spirit of Premchand’s story, Ray decided to make major departures, introducing new characters and plots, especially at the end. However, Ray took no liberty with history. Robinson’s Introduction and the chapter on ‘Research and Scheduling’ detail the meticulous process of Ray’s journey, including his meeting with General Jacob, the GOC-in-C, Eastern Command, and reading all the relevant texts available on the subject.

The author has done a competent job of arranging and contextualizing the intimate letters and connecting them with stories and observations to give a clear perspective of the film-making process. In the chapter on ‘Casting’, here is a snippet from a Ray letter, ‘I’m still not hundred percent happy about Shabana in the role of Mirza’s wife. She is too young and well-endowed not to be able to “rouse” Mirza in the crucial scene. Madhur would certainly be more convincing here.’

Jindal does not shy away from expressing his frustrations while the filming was on. There were major tensions and occasional shortage of funds. Alluding to the apparent neglect shown to some crew members of his unit, Ray admonishes, ‘I realised then that you are inclined to assess a person by his facade and his lifestyle rather than his intrinsic merit. I’m afraid this is a yardstick which I never apply. I am not going to recount for your sake all the humiliation that my crew suffered in Jaipur. I can’t imagine that you could be so blasé or so insensitive as to be unaware of them…’ Fortunately, this issue was amicably settled.

‘The Release and After’ shows the turbulent times they had gone through, especially about the film’s distribution in northern India and the adversarial stand from the ‘commercial-wallahs’. Though critically acclaimed in India and abroad, one reviewer in The Illustrated Weekly of India found Ray’s Wajid Ali Shah effete and effeminate—a charge which was rebutted by Ray, hammer and tong. Tim Radford commented, ‘Satyajit Ray seems to be able to achieve more and more with less and less’ in The Guardian. Later, VS Naipaul, referring to a sequence in the film remarked, ‘It is like a Shakespeare scene. Only 300 words are spoken but goodness!—terrific things happen.’

Lack of anger in the film also annoyed some. Ray responded, ‘I was portraying two negative forces, feudalism and colonialism. You had to condemn both Wajid and Dalhousie. This was the challenge. I wanted to make this condemnation interesting by bringing in certain plus points of both sides. You have to read the film between the lines.’ The average cine-goer could hardly do so, especially at home and at that time.

There are many other stories recounted faithfully, not related to Shatranj. For example, Ray told Carriére, in the context of his wish to make a film on an episode of the Mahabharata in English, ‘I gave up, because I couldn’t imagine Kirk Douglas playing Arjuna.’ There is also an interesting reference to Steven Spielberg’s Close Encounters of the Third Kind and its striking resemblance with Ray’s earlier screenplay of The Alien. We also learn that at one time in 1978, Ray was immersed in international offers: to make a documentary on Rajasthani music for French TV, a three part film for BBC (90 minutes each) on subjects of his choice, a film for the United Nations on the ‘horrors & miseries of war’ for worldwide TV screening, and a revival of his The Alien under a major US company! Despite all this, he had the time to write to Jindal that the honorific Munshi should not be added since Premchand was a pen name!

While watching the clash of cultures in Ray’s Shatranj, one appreciates that his world was an extension of Tagore-Nehru’s—rational, tolerant and humane. Ray also adds the element of irony in his major films, not common in our literary tradition. His was the first spurt of true creativity in newly Independent India that received global acclaim, making him perhaps the one true Renaissance man in the second half of the twentieth century.

Jindal’s book illuminates this persona of Satyajit Ray and his working methods. Through the lens of these personal letters and of stories interwoven in between, the mind of Satyajit Ray is revealed to a grateful Suresh Jindal, as never before and after. The illustrations made by Ray and many colour plates add lustre to the book. It should be read by everyone interested in cinema, chewed and digested.

Amitabha Bhattacharya, an engineer by education and a retired member of  the IAS, has served in the erstwhile Planning Commission, as Principal  Adviser in charge of Education, Culture, and  with UNDP, New Delhi. He now writes mostly on public affairs in national dailies.

Shatranj, based on a short story by Premchand, got made and as a by-product, forty years later, comes out this re-markable book. His adventures with Ray read with Ray’s adventure with the film are so rich, nuanced and delightful that the readers will get a distinct flavour of Ray’s mind as also interesting insights into the question of what constitutes the Ray-phenomenon.