The Malady of Minority Identity 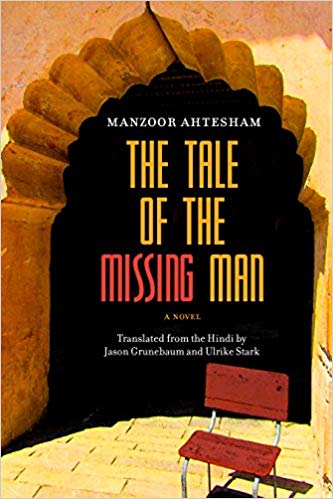 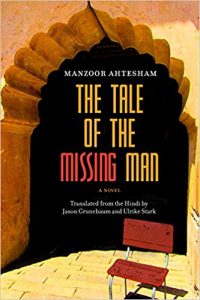 The Tale of the Missing Man, the newly published translation of Manzoor Ahtesham’s Dastan e lapata is strikingly prescient. Originally published in Hindi in 1995, Ulrike Stark and Jason Grunebaum’s translation brings Ahtesham’s masterpiece to an English reading audience at a time when the relations between the Indian state and Muslims are once again at the heart of the political debate. The Tale of the Missing Man can be read as a postmodern inquiry into ideas of the self, and the position of Muslims in India around the time of the Ram Janmabhoomi movement and the Babri Masjid demolition.

The novel is structured around the protagonist Zamir Ahmed Khan and his internal and external struggles as he tries to make sense of the fast-changing world around him. Zamir suffers from a mysterious disease which slowly but surely limits his ability to move freely around his hometown of Bhopal and causes him to spend most of his time alone reminiscing about his life trying to understand where it went wrong. The tongue in cheek tone of the novel mixes descriptions of genuine struggle with questions regarding the separation between the author and his protagonist, and between truth and fiction. The Tale of the Missing Man manages to be both challengingly playful, stretching the boundaries of the pact between the author and the reader, while touching painful questions regarding an individual who is unable to integrate into his surroundings.

Muslim authors writing in Hindi such as Ahtesham are often read through the lens of their religious identity rather than through the texts they write and they anticipate this in their writing style and tone. Muslims writing in Hindi occupy a special position as they confront the automatic association of Hindi with Hindu. These authors challenge assumptions about the division between Hindi and Urdu and deny the possibility of delineating clear borders between Hindu and Muslim experience. Ahtesham plays with these expectations and blends the two languages in such a way that their separateness is questioned. Possibly, translation cannot express this aspect, but the supple English used in this translation succeeds in transmitting the ironic edge and humour of Ahtesham’s language.

It is important to note that unlike Dalit authors for example, Muslim authors in Hindi do not identify as Muslim authors and are not part of any movement. These are Hindi authors who happen to be Muslim just as other Hindi authors happen to belong to a specific caste or region. Having said that, it is still productive to compare Ahtesham to other Muslim authors of his generation (all born in the second half of the 1940s) in order to examine the different strategies they have chosen to deal with the questioning of their use of Hindi. Writers such as Asghar Wajahat and Nasira Sharma, whose novel Parijat (2011) won the Sahitya Akademi award for Hindi in 2016, write in a style which smoothly blends Hindi and Urdu words and that does not call attention to itself. By refusing to respond to the questioning of their language choices they manage to transcend the tensions associated with Muslims writing in Hindi and stake an equal claim as authors whose religious background has nothing to do with their choice of language. Abdul Bismillah on the other hand, chooses a similar mode of resistance to Ahtesham in that he employs a language style that calls attention to itself. However, unlike Ahtesham, he does not challenge the division between Hindi and Urdu by mixing the two together, but employs a high register Hindi showing that it does not necessarily belong to high caste Hindu authors. For example, in his novel Apavitra Akhyan (An Impure Story, 2008) a Muslim Hindi teacher uses purified Hindi to pass as a Hindu and confront his Hindu and Muslim interlocutors with their linguistic and religious prejudices.

Just like Ahetsham, these authors do not purport to tell the story of Indian Muslims. Rather, the Muslim protagonists are deeply linked to the local histories and social dynamics of the cities and regions that they belong to. Thus, Asghar Wajahat’s protagonists are most often Shias from Awadh and the decline of the zamindar elite is a running theme. Ahetsham’s novels, including The Tale of the Missing Man, are deeply linked to Bhopal, its history as the capital of a Princely State, the transformations that occurred after Independence and the creation of the State of Madhya Pradesh in 1956 with Bhopal as its capital.

As part of the novel’s investigation of self and identity, it also explores contours of minority existence and specifically the experience of being Muslim in India. Minorities often straddle the line between ‘us’ and ‘them’ by belonging to the nation state but not necessarily to the religion of the majority. Indian Muslim authors writing since Independence depict the specific contours of the Indian Muslim experience which are otherwise rendered largely invisible in contemporary Hindi literature.

From our very first introduction to Zamir Ahmed Khan in the first line of the novel we know that something is wrong with him. The Tale of the Missing Man starts with Zamir visiting a doctor whom he secretly calls Dr Crocodile because of his bulging eyes and his mouth full of flashing gold teeth. The opening places Zamir in the position of a problematic patient, a position he maintains throughout the novel. The doctor’s questions serve as a device for laying out Zamir’s biographical details and current circumstances, as well as allowing us access to Zamir’s mind and the way he reacts to being labelled and diagnosed. The clinical setting, with the protagonist being interviewed about his disease by a doctor, introduces the reader to the novel as a search for the source of his mysterious disease. It also suggests a projection of the doctor-patient relationship into that between reader and author, here between the Hindi reader and a Muslim author’s Hindi writing. Zamir rails against being seen as a patient rather than as an individual, just as Muslim authors resist being read solely through their religious identity. The doctor, however, wants to dispatch his patient in the shortest possible time and is not interested in his personal story or in treating him as an individual:

The doctor’s fingers commenced probing, touching, kneading, drumming on his body in every way imaginable, looking and listening, his bloodshot eyes squinting, darting around like red lights atop a speeding ambulance, spinning and flashing. It might have been a signal: I’m in a hurry, get out of the way.

The doctor’s lack of interest is emphasized when he fails to find any problem with Zamir and declares him healthy in spite of Zamir’s protests and cries for help. Zamir is forced to agree with the figure of authority, the doctor, but he cannot resist repeating the well-known Hindi saying: ‘If you live in the river, don’t tease the crocodile.’ The context of the hierarchical relations between Zamir and the doctor can be read as the tension between the majority and its dependent minority. In other words, even when minorities are discriminated against by the majority, or suffer violence while the state turns a blind eye, they are forced to apply to the same majority or state for protection.

A similar imbalance of power is recreated in Zamir’s relationship with his older cousin Kalim, whom everyone called Apyaya, since he was deaf and dumb and kept on producing the sound Apyaya. As children, Zamir and his other cousins used alternately to play with Apyaya and pick on him, include and exclude him in their games according to their whims. Apyaya had no say in the matter as he was unable to express himself. Even though descriptions of Apyaya take up little space in the novel, he nonetheless serves an important role in shaping Zamir’s life and self-understanding. The significance of Apyaya’s muteness is emphasized when we recall that the meaning of the name Kalim is ‘speaker’. Apyaya’s muteness has a lasting effect on Zamir as there is a semi-conscious identification between his own illness and his cousin’s disability. In the context of their relationship Zamir is cast in the role of the able-bodied majority and is now consumed by guilt for being insensitive to Apyaya’s plight. He feels as though his present condition is a direct result of his hard-heartedness or childish cruelty towards the defenceless and voiceless Apyaya. Only now, when he himself is desperately frustrated at being unable to fathom his disease and convince others of the reality of his suffering does the memory of Apyaya haunt him. Zamir asks himself what is wrong with Dr Crocodile’s attitude, since he knows from experience that it is impossible to understand or sympathize with someone else’s suffering without first-hand knowledge of suffering oneself. As in the description of the interaction between Zamir and Dr Crocodile, the expression of frustration, of the impossibility of explaining one’s experience or changing someone’s point of view, is a central part of the condition of being a minority.

The Tale of the Missing Man is a remarkable novel in the way it links the fragmentation of individual identity to the larger process of societal fragmentation which includes transforming Muslims in India into internal aliens, aliens whose joint history with Hindus is being actively erased. The novel manages to be both an individual psychological portrait and a warning of the price of communalism. This beautiful translation opens a window for the English language reader into a world that is rarely portrayed in Anglophone Indian literature. The reader will be rewarded with an intimate portrait of Bhopal and the poignantly touching figure of Zamir Ahmed Khan.

David Landau wrote his PhD at SOAS University titled ‘Writing from the Margins: Muslim Authors in Hindi and “Minor Literature”’.